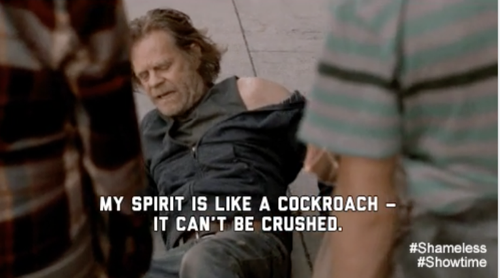 Did you watch the last Shameless episode where Frank (William H. Macy) worried that he and his new family will lose their Home for the Homeless shelter? If you missed it we have  a full and detailed recap, right here for you.

On tonight’s Shameless episode as per the Showtime synopsis, “Frank (William H. Macy) learns that a billionaire philanthropist has bought the homeless shelter and that he and his clan can stay. Meanwhile, Fiona gets smart financial advice from a Tinder hookup; and Ian struggles with his feelings for Trevor.”

Tonight’s Shameless season 7 episode 5 is going to be great, and you won’t want to miss it. So be sure to bookmark this page and tune in for our coverage of Shameless tonight between 9 PM – 10 PM ET! While you wait for our recap, make sure to check out all our Shameless spoilers, recap, news & more, right here!

Tonight’s episode of Shameless kicks off with Lip waking up at his new girlfriend’s house – he’s been hooking up with one of the waitresses at the diner. She kicks him out early in the morning, and he heads to his internship – it’s his first day back at work since the feds busted the office.

Frank is woken up bright and early at his make-shift homeless shelter. There are construction men working outside. A woman from DSS wakes Frank up and says that a billionaire named Simon Epstein bought the house and is letting them keep it as a shelter. Frank is overjoyed – his shelter is off the market and he won’t be kicked out.

Fiona is already up, and hooking up with her latest guy from Tinder. When they are finished she kicks him out and he leaves his card, apparently he’s a financial consultant. Fiona tries to do some laundry at the Gallagher house before work – but the washing machine dies, it’s the one that Jimmy bought for her years ago. The boys come downstairs for breakfast, Debbie is MIA, she’s been avoiding Fiona because she doesn’t have her utility money and is afraid Fiona will kick her out.

At V’s house, Kevin, Svetlana, and V are sitting at the kitchen table and going over the books from the bar. V and Svetlana want to legally adopt each other’s kids so that they can claim them on the tax returns. Kevin is not too thrilled by their plans, if V and Svetlana legally adopt each other’s kids, then that means he is not legally their father.

At Frank’s homeless shelter, things are really starting to look up. Now that the billionaire philanthropist has bought the house, they have hot water and gas to cook on the stove. Frank organizes the troops and sends them out to different curbs to beg for money so they can get drugs and food.

Carl heads to an interview at the military school that he is trying to get in to. He learns that there are only a few spots left and they are reserving them for minorities. So, he will have to reapply next year.
Fiona heads to the local laundromat, there’s an old woman handing out quarters because the change machine is broken. Fiona starts chatting with her and learns that the woman might sell the laundromat because she can’t keep it up anymore.

Lip heads to work – he helps his boss order new furniture and computers. And, they are going to have to hire new employees because they lost half their staff after they got arrested.

Debbie stops by the homeless shelter with the baby. She asks Frank how she an make quick cash. Frank snarks that he has a new Debbie. Debbie explains that she needs to make $372 in 24 hours, Frank tells her to hit the corner with the baby and start begging and everyone will feel sorry for her.

Ian helps his new boyfriend Trevor move a teen in to Frank’s homeless shelter. When he meets Gia, he’s shocked to learn that Gia is actually a “he.” Ian heads to work, and in the ambulance he tells his partner about Trevor, he insists that he is just a friend. Ian’s partner warns him to be careful with rebounds.

Fiona stops by Margo’s office looking for her. Fiona wants a raise because she has turned business around at the diner. She argues that she works 24/7 and she wants a part of the cut. Margo’s assistant scoffs at her request. He points out that the only person making any money on the Southside are the business owners, and Fiona doesn’t OWN it.

Carl heads to Dom’s house after his interview, he’s upset that he didn’t get in to military school. He says the school is being racist and won’t let him in because he is white. He wants Dom’s dad to vouch for him and tell the school he has a black brother, but he won’t help.

Debbie hits the corner begging for money, but all she gets is half a bottle of booze and a bunch of prayer pamphlets from nuns.

Debbie makes $16 on the curb, she stops by the diner and gives it to Fiona and then heads back out on the street. Derek’s sister Tanya, her baby’s Aunt finds her on the side of the street and is horrified that she’s begging with the baby. After Tanya leaves, Debbie gets in a fight with another homeless woman over the corner.

V stops by Fiona’s house to drop off some of her stuff since they are no longer friends. Ian lectures Fiona about burying the hatchet with V but she doesn’t want to hear it. She storms out an heads to work.

Dom’s Dad has a change of heart, he takes Carl to a DNA clinic to get some bloodwork done to prove that he has black ancestors. He convinces Dom’s dad to get a DNA test done too to find out if some of their ancestors are related.

Frank stops by the bar to get a drink. Svetlana won’t let him order until he pays his tab, which is $223. Everyone is shocked when Frank actually whips the money out of his pocket and pays up. Apparently running the homeless shelter is turning out to be pretty lucrative.

Ian and Trevor finally have an awkward talk about their relationship. Ian is obviously attracted to Trevor, but totally wierded out by the fact that he’s a transsexual. He heads to Kevin’s house to do some laundry and get advice from him.

It looks like Debbie’s luck is turning around. She meets Sara, the waitress at the diner, handicapped brother. He was hit by a bus, and is in a wheelchair and just got a hefty lawsuit, she convinces him to hire her to take care of him.

Lip pays his friend Joaquin a visit at college, he’s a hacker. Lip decides since the office isn’t paying him, he and Joaquin are going to steal some of the funds from the Fantasy Sports website that the office is running.

Tonight’s episode ends with a man in a suit showing up at the Gallagher house, he’s from Child and Family Services. Apparently, Debbie is being investigated for neglect and could lose the baby – someone recorded a video of her fighting on the street corner with the baby.