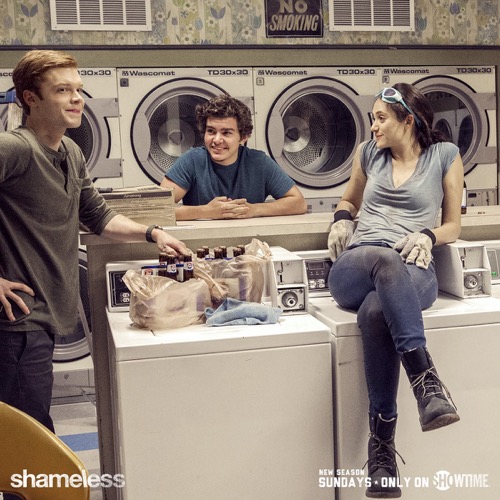 Tonight on Showtime the uniquely twisted and highly entertaining show Shameless returns with an all new Sunday, November 27, season 7 episode 9 called, “Ouroboros” and we have your weekly Shameless recap below. On tonight’s Shameless episode, as per the Showtime synopsis, “Monica (Chloe Webb) returns and her first task is to help Debbie (Emma Kenney) get Franny (Bridgid Coulter) back. Meanwhile, Frank (William H. Macy) learns of Monica’s return and tries to avoid her; Lip (Jeremy Allen White) tries to mask his relapsing alcoholism; Ian (Cameron Monaghan) and Trevor (Elliot Fletcher) fight for the first time; Fiona’s (Emmy Rossum) laundromat gets its first bad review.”

Tonight’s Shameless season 7 episode 9 is going to be great, and you won’t want to miss it. So be sure to bookmark this page and tune in for our coverage of Shameless tonight between 9 PM – 10 PM ET! While you wait for our recap, make sure to check out all our Shameless spoilers, recap, news & more, right here!

Tonight’s episode of Shameless kicks off with Monica, the Gallagher’s elusive mother, hitchhiking in to town.  Svetlana kicks Frank out of the Alibi, he’s rolling around on the sidewalk when Monica finds him. Frank is shocked to see her – he stomps off and heads to the laundromat to sleep it off. Monica chases after him and begs him to talk to her. Frank tells Monica to “Go F—k Herself,” and slams the laundromat door in his face.

Fiona leaves the house bright and early in the morning and finds Monica sitting on the doorstep. Fiona blows her off and marches past her. She heads to Derrick’s family’s house where Debbie has been sleeping on the yard since they took her baby.

Fiona takes the breast milk that Debbi pumped to the door – she tries to talk Derrick’s mom in to giving back the baby. She takes the milk and slams the door in her face and says she will see her at Child Services tomorrow.

Trevor and Ian are woken up by Ian’s phone, it’s Monica. Ian tries to explain that his mom is a bit on the crazy side. Trevor wants to meet her, and says they should take her to the bar with them that night.

Fiona heads to the laundromat to get to work. Etta is sitting in her corner, just as senile as ever. She actually believes that she is the one that bought all of the new washing machines. Frank shows up with Etta’s medication and food, he is pretending to be her dead husband so he has a place to stay at night.

Lip is clocking out of the diner, he pours some vodka in to his coffee before he heads home. Sierra comes in to work and blows Lip off, she still isn’t speaking to him. Lip tries to apologize for beating up her baby-daddy.

Debbie heads to the Gallagher house to get cleaned up – Monica is still sitting on the porch and follows her inside. Debbie rants that she doesn’t have time for Monica’s drama, she needs to get her baby back. Monica is thrilled she’s a grandmother, and vows to get Frankie back.

She marches over to Frankie’s grandmother’s house and Debbie watches in horror as Monica smashes in all of their windows with a baseball bat. In the midst of the chaos, Debbie snatches the baby in her stroller and they make a run for it.

Fiona’s opening of the laundromat is going smooth, she’s selling organic coffee and pie to her customers. She’s shocked when someone named Jesse gives her bad Yelp review and calls her a “clueless Southside chick.”

Frank and Etta head out for a romantic dinner. Frank is eating and ranting about Monica when all of a sudden Etta has a moment of clarity and realizes that she doesn’t know Frank and he’s not her husband and storms out.

Kevin is still sleeping on Fiona’s couch.  He wants to make up with “V” but he doesn’t trust Svetlana.  He sneaks over to talk to V while Svetlana is at work.  Kevin wants them to go on the Steve Harvey show, or at least see a counselor.  V heads to the bar and convinces Svetlana to go to counseling with them.

Debbie is grateful that Monica helped her get the baby back, she tells her that she can crash at the apartment with her and Neil.  Monica heads to the Alibi to wait for Frank, she gives Debbie her bag and says that she will meet her there later.

At the Alibi, Lip shows up to get drunker, and Monica hounds him.  He’s wound pretty tight, to add insult to injury, his professor calls him about a new internship.  Monica gets a text from Ian and heads to the bar to meet him and Trevor.  When she arrives, Trevor and Ian are already arguing with each other, Monica gets involved and Ian storms off and leaves Trevor with his mom.

Lip and Fiona head home and chain smoke and drink together while they rant about Monica returning to town.  Kevin interrupts their chat in his bath robe, he’s doing his laundry.  Kevin is excited about couple’s therapy, he thinks the counselor might convince V to leave their throuple.  Ian storms in and joins his brother and sister in their anti Monica party.

Monica is wasted, she heads to the laundromat and screams at Frank from the street.  She throws her shoes at the window and cries and begs Frank to come downstairs.

Sierra comes home form work – Debbie tells her that Monica is coming to stay with them and tells Sierra that there isn’t enough room for her and her son, so she is going to have to move out.  Debbie even began packing up her stuff.

Lip heads to the diner the next morning – Sierra decides to start talking to him again.  She met his mom last night, and Monica threw up in her bed and stole her shoes.  When no one is looking, Lip pours more booze in his coffee.

Fiona warns Lip not to go the laundromat because Monica is over there looking for Frank.  Lip bets Fiona $20 that she will freak out over Monica before the day is over.

Debbie heads to the DCFS meeting, the social worker takes her side and tells Derrick’s family that Debbie is keeping custody of the baby and they aren’t allowed to kidnap her.

Lip decides to try and win Sierra back by going to her new apartment and fixing it up for her.  She’s not too pleased to see him, and can tell that he has been drinking.

Kevin and his wives head to therapy, afterwards Kevin and V are thrilled that their three way marriage is back on track.  Then, everything goes down hill when they head back to Alibi and learn that Svetlana switched liquor distributors, and apparently told the distributors that she is the owner.

It looks like Fiona owes Lip $20, she finally snaps, like everyone knew she would.  Jesse, the bad Yelp reviewer, shows up at the diner.  Fiona freaks out on her and calls her hipster trash, and then smears a cheeseburger all over her shirt.

Monica finally wears Frank down – she calls him in to Debbie’s house and shows him what she has been carrying around in her bag, they are MRI’s,  Monica is dying.  Frank breaks down in tears.

Ian and Trevor meet up, and they finally make up.  Trevor trusts Ian, so he shows him his driver’s license, from when he was still a woman.

Fiona heads home and Lip is sitting outside on the porch.  She reluctantly hands him $20, and says she “doesn’t want to talk about it.”  While they are sitting outside, two detectives show up in an unmarked cop car.  They are looking for Ian because Mickey escaped from prison.