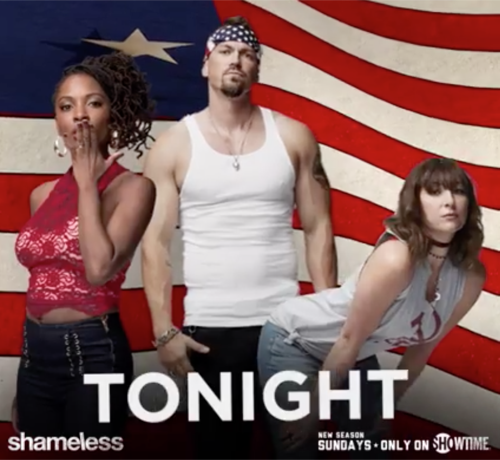 Tonight on Showtime the uniquely twisted and highly entertaining show Shameless returns with an all new Sunday, November 6, season 7 episode 6 and we have your weekly Shameless recap below. On tonight’s Shameless season 7 episode 6, Kev (Steve Howey) and V discover a shocking secret about Svetlana’s (Isidora Goreshter) father.

Did you watch the last Shameless episode where Frank (William H. Macy) learned that a billionaire philanthropist had bought the homeless shelter and that he and his clan could stay? If you missed it we have  a full and detailed recap, right here for you.

On tonight’s Shameless episode as per the Showtime synopsis, “Fiona discovers the laundromat is for sale and decides to invest in it. Meanwhile, Frank revels in the good fortune of his latest scam; Ian grapples with mixed feelings about Trevor; Debbie deals with a bombshell; Carl has second thoughts about military school.”

Tonight’s Shameless season 7 episode 6 is going to be great, and you won’t want to miss it. So be sure to bookmark this page and tune in for our coverage of Shameless tonight between 9 PM – 10 PM ET! While you wait for our recap, make sure to check out all our Shameless spoilers, recap, news & more, right here!

Tonight’s episode of Shameless kicks off at the Gallagher house. Fiona is hiding out in her room with her new air conditioner. Lip stops by, he’s worried about Debbie, apparently, she is hiding out at Neil’s house and taking care of him for money – she is still dodging Child Services.

Everyone heads down to the kitchen for breakfast. Fiona and Lip crack joked about Carl’s new found Indian heritage. Laugh all they want though – it got him in to military school. He’s leaving in a few days, Fiona is planning him a going away party.

Lip heads over to Sierra’s house to hook up with her, he runs in to Debbie and Neil. Debbie wants Lip, Carl, and Ian to come over for dinner later. She says that Fiona isn’t allowed to come.

Meanwhile, things are getting even weirder at Kevin and V’s house, if that is even possible. Kevin walks in on Yvon having sex with someone in his bed, and he is certain it is Svetlana. He rushes to the bar and tells V what he saw. V is certain that Svetlana’s dad was raping her and forcing her to have sex with him.

Frank is getting the King’s treatment at his homeless shelter. The new owner sends over brand new furniture for the house from a local church. And, as soon as the delivery man leaves, Frank sells the furniture. He’s got quite a racket going, and is making hundreds of dollars a day by sending his new family out begging.

Lip meets with his friend to see how the hacking is going – they are stealing money from the company where he interns at. He chats about his recent hook-up with Sierra, he gets a little freaked out when he realizes that Sierra thinks he is her boyfriend.

Debbie and Neil stop by the diner for lunch – Debbie rants that she had a meeting with social services, and that Fiona doesn’t care about what happens to the baby. Fiona invites Debbie to Carl’s going away party, and she reluctantly agrees to come.

Svetlana shows up at the bar – Kevin and V argue over who is going to talk to her about hooking up with her dad. Kevin sits down with Svetlana and asks her if she has ever had sex with her dad. Svetlana gives him a strange look and walks away and doesn’t answer his questions.

Carl is freaking out – the reality of military school is starting to hit home. He heads over to Dom’s house to ask her dad about “Hell Week” at the military school. Dom sneaks outside to flirt with him. Dom tells Carl that going to the school is a horrible idea and she apologizes for cheating on him, then she plants a kiss on him.

Things are awkward between Ian and his new friend Trevor. Trevor stops by to invite him to a party later that night.

Lip and his hacker friend Joaquin head to the bar to get a drink to celebrate stealing their first $300 without getting caught. Lip can’t wait to steal more money the next day.

Fiona stops by the laundromat, she learns that the old woman that lives there and runs the laundromat still hasn’t signed the sale paperwork. Fiona wants to buy her out, she says she is going to the bank to get a loan.

Lip heads to Sierra’s, Debbie can tell that he has been drinking, but he reassures her that he has it under control. Carl and Ian are already there for the big dinner. Carl confesses to Ian that he is thinking about not going to military school because Dom wants to get back together with him.

Dinner gets awkward when Sierra accuses Debbie of just using Neil for his money. Debbie rants that she and Neil are perfect for each other. He helps her take care of Frankie, and she likes that he doesn’t lie – apparently the fact that he is paralyzed doesn’t seem to bother her. And, they are engaged and getting married.

Frank’s new family is starting to get suspicious. Some of them are beginning to wonder where all of the money is really going. Frank threatens to kick them out if they won’t stay in line. He surprises them all with White Castle and vodka for dinner, then he heads up to his room to have some prime rib.

After Debbie’s awkward dinner, everyone leaves except for Lip. Then he tries to have “the talk” with Sierra about their relationship. She screams at him that he is not all that, and no one is in love with him, then she kicks him out.

At breakfast at V and Kevin’s house things are certainly awkward. Kevin and V take all three of the kids for a walk and leave Svetlana at home with her dad. They sneak back in to the house and catch Svetlana and Yvon having sex again, but its obvious that Svetlana is not being forced to do it and is very willing.

Debbie stops by the homeless shelter to talk to Frank. She’s under 18 so she needs a parent to sign paperwork so she can marry Neil. Shockingly, Frank refuses to sign the papers. Frank tells Debbie if she wants to marry someone in a wheelchair he will only give his blessing if he is an elderly man and only has a few years to love.

Debbie stops by the diner and asks Fiona to sign the papers so she can get married – she’s shocked when Fiona agrees to sign the papers for her. Then, their chat is interrupted when Fiona gets a phone call from the bank. She was only approved for $80,000, but she needs $100,000 to buy the laundromat. She heads to the laundromat, and the woman that owns it is clearly senile and signs the papers even though she is short $20,000.

Lip is out walking his boss’ dog when the company he interns at gets raided by the FBI, again. It looks like his new cash scam is closing, and now he is stuck with a dog named Rocky. He heads to the diner with Rocky, he tries to smooth things over with Sierra. She agrees to pretend the last 24 hours didn’t happen, and insists that from now on they just keep it “fun and casual.”

Ian is on a call – a woman is hit by a car, while Ian is working on her in the back of the ambulance, she passes away. Her dying words were in Spanish – she wants Ian to give a message to her son.
Frank stops by the Gallagher house to borrow a shovel. He sees Carl’s Military school papers and makes fun of him. Then he invites Liam back to the homeless shelter with him to try out his new massage chair.

V and Kevin head to the bar and confront Svetlana about having sex with her dad. Svetlana confesses that Yvon isn’t really her dad, he’s her husband from Russia. Obviously her wife V is shocked by the news…

Fiona heads back to the diner and brags to Lip that she just bought the laundromat. He freaks out when he realizes that Fiona put their house up as collateral to get the loan from the bank. He and Fiona get in to a fight over who is the bigger screw-up between the two of them.

Frank and Liam head back to the shelter, but the homeless people are not thrilled to see him. They went through his room and found all of the cash that he has been stealing from them. They toss Frank out his second story window and kick him out of the shelter.

It’s time for Carl’s big going away party. But, it’s a typical Gallgher party so they forgot the balloons and streamers, and Ian didn’t show up.

Ian shows up on Trevor’s doorstep in tears. He tells him about the woman in the back of the ambulance – then rushes in to the house to hook up with him.

Everything that goes up must come down, Frank hits rock bottom…again. He spends the night in the park eating garbage and sleeping on a park bench with his leg in a cast.

Dom’s dad meets Carl at the bus to make sure that he actually goes to military school. Carl gives his family a farewell speech and they say their goodbyes.