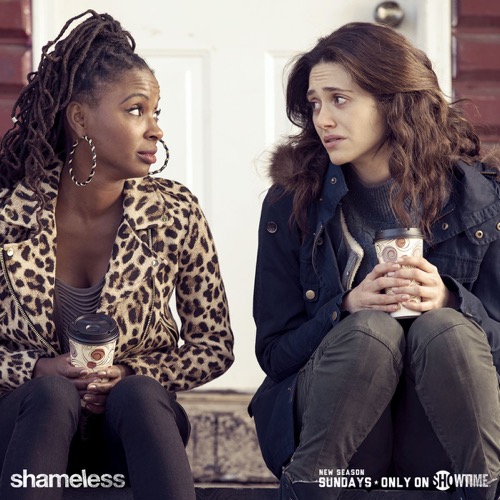 Tonight on Showtime the uniquely twisted and highly entertaining show Shameless returns with an all new Sunday, December 4, season 7 episode 10 called, “Ride or Die” and we have your weekly Shameless recap below. On tonight’s Shameless episode, as per the Showtime synopsis, “Fiona (Emmy Rossum) considers selling the laundromat when she’s faced with renovations and repairs. Meanwhile, Ian (Cameron Monaghan) deals with the reality that Mickey might be out of prison and on the lam; and Kev (Steve Howey) and V take matters into their own hands after learning of Svetlana’s latest betrayal.”

Tonight’s Shameless season 7 episode 10 is going to be great, and you won’t want to miss it. So be sure to bookmark this page and tune in for our coverage of Shameless tonight between 9 PM – 10 PM ET! While you wait for our recap, make sure to check out all our Shameless spoilers, recap, news & more, right here!

Tonight’s episode of Shameless kicks off with Ian waking up with his new boyfriend – he’s getting ready to run off to work. Ian is still rattled about Micky escaping from prison. He reassures Trevor that he isn’t getting involved with Micky and he doesn’t have anything to worry about.

Fiona is getting ready to head to work and she gets a phone call from Chad – Margo wants to meet with her. On her way out the door, Fiona sees V sitting on her front porch, they ignore each other.Lip wakes up on the train with a mean hangover, he has stamps and bracelets on his wrist from the bars that he hit the night before.

Lip wakes up on the train with a mean hangover, he has stamps and bracelets on his wrist from the bars that he hit the night before.

At Neil’s house, Frank and Monica are staying there. At the breakfast table, Debbie gives them a lengthy list of rules – no drugs, alcohol, and she expects them to chip in on the bills.

Monica takes Frank outside to tell her about her plan. Her time is limited, the doctors didn’t give her long to live. Monica wants to leave each of the kids $5,000 when she dies. So, she has a bag full of masks and guns, she needs Frank’s help to pull off a robbery.

V and Kevin are freaking out, Svetlana totally played them. They thought they were signing adoption places, but they actually signed the bar and all of their checking accounts over to Svetlana.

Fiona shows up at the diner, Margo is waiting for her. She founds out that Fiona bout the laundromat, and she wants to buy it from her. She offers Fiona $10,000 more than she paid.

Kevin heads to the bar to confront Svetlana. She scoffs that she is the manager of the bar, and it should be in her name. Svetlana rants that Kevin and V were running the bar in to the ground and they were losing money left and right. Svetlana doesn’t see anything run with what she did, and wants to continue being a throuple.

Lip arrives at the diner to work, still hung over. He tries to wash dishes and cuts his hand, then he dumps band-aids all over the floor trying to open the first aid kit. One of the waitresses helps Lip out, and then he asks her for some Adderol or weed.

Fiona heads upstairs to fix Etta some food. She is planning on turning the laundromat in to a club that night, she warns Etta that the music might get a little loud. Meanwhile, Debbie is downstairs, it’s her first day at work at her sister’s laundromat.

Monica has a pretty complicated heist planned out, and she actually convinces Frank to help her steal drugs from the local jail so that they can get high before they rob the Moneygram store. The Moneygram store is a bust, it turns out that they have bulletproof windows. The owner chases them out with a shotgun. They head to the park to smoke and plot their next move.

On his way to work, Micky contacts Ian on a burner phone. Ian skips out of work and heads out to meet up with him. Ian arrives at the meeting place and men show up in a black van and throw him inside and drive off.

One of the waitresses texts Fiona and tells her that Lip is at work and he’s a hot mess. Fiona heads over to the diner to check on him. She demands to know if Lip is wasted on the clock. Fiona begs Lip to go home before she has to fire him.

The van drops Ian off at the highschool by the bleachers where he used to hook up with Micky he’s there waiting for him. Micky says he’s waiting for cash and a new ID and he’s heading to Mexico, he wanted to see Ian before he left.

Kevin stops by the laundromat and fills Fiona in on what Svetlana did to him and V. Kevin wants Fiona to stop by the house and talk to V, she really needs a friend right now.

Meanwhile at home, V is sitting on the front porch drinking and burning all of Svetlana’s clothes in the front yard. The cops stop by and tell her to put out the fire, and keep her eye out for the escaped convicts.
Fiona’s laundromat is bumping at night, the place is packed. Fiona is stressed out though because they aren’t making money as fast as she thought she would. She’s starting to consider Margo’s offer, Debbie warns her that Gallaghers don’t sell out.

Frank and Monica head back to Debbie’s house wasted in the middle of the night. The door’s locked and she won’t let them in – she has set a curfew for 11:00 PM. Her parents aren’t too happy.

Ian heads home, he opens up to Fiona that he can’t get Micky out of his head. He misses the thrill of being around Micky, and is contemplating leaving with him. Fiona tells Ian that Micky would ruin his life, and she’s proud of the way that he has turned his life around since Micky left. She doesn’t want him to get sucked back in to it again.

After Fiona leave, Ian sneaks off to meet up with Micky. Micky kisses him and Ian pushes him away and says that he doesn’t want to ruin his life. Ian screams that he has his life together now and he has a boyfriend. They argue, and then start ripping each other’s clothes off.

Lip wakes up again, he’s passes out on somebody’s floor. He broke in to Helene’s house while he was blackout drunk and passed out on the floor. Helene finds him in the livingroom and tells him that he has to leave. Helene can tell that Lip is messed up, she takes his hand and tells him to get some help before he leaves.

Ian wakes up in the back of the van, he spent the night with Micky. He gets up and gets dressed, and then kisses Micky goodbye. Micky asks if he is going to see him again, but Ian doesn’t answer.
Monica and Frank find Neil I the livingroom alone, Debbie is at work. They decide that Neil needs to “live a little,” because Debbie doesn’t let him have any fun.

Fiona heads to the diner and sits down with Margo. Margo is now offering Fiona $100K, then she ups it to $120K. Margo reveals that she is redeveloping the entire block and she needs to buy out the laundromat too. She offers Fiona $160K, and tells her she has until the end of the day to decide. That’s double what Fiona paid for it.

Frank and Monica take Neil out, they have a new plan. They convince Neil to let a bus hit him in his wheelchair. While the driver is freaking out and trying to help Neil, Frank and Monica steal the bus – which is full of senior citizens that are on their way to the casino. They crash the bus a few blocks away, and make off with all of cash and prescriptions.

Fiona heads back to the laundromat and Etta is up late, they have their own little dance party to one of Etta’s favorite songs.

Frank and Monica finally get home with Neil and Debbie is furious when she learns that they used Neil as a decoy to rob the bus. Debbie screams that she loves Neil and she is sick of them acting like he is a hamster in a wheel. Debbie takes $500 from her parents and then kicks them out and tells them that they aren’t welcome there any more.

Fiona finally stops by V’s house to bury the hatchet with her. V confesses that she lost the alibi, Fiona feels horrible because she sold the laundromat to Margo and cashed out. At least she made $60K off from it. They comfort each other and promise to never fight again.

Tonight’s episode ends with Lip pacing in front of a church. He pounds a beer and then heads in to an AA meeting.

Ian packs a bag and meets up with Micky, they ride off in to the sunset together.