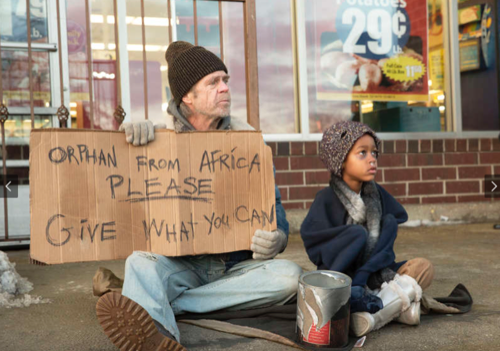 Tonight on Showtime the uniquely twisted and highly entertaining show Shameless returns with an all new Sunday March 27, season 6 episode 11 called “Sleep No More” and we have your weekly recap below. On tonight’s episode, Frank (William H. Macy) offers to pay for Fiona’s (Emmy Rossum) wedding reception and then goes scamming around town to raise the money.

On the last episode Sean officially moved into the Gallagher house; Fiona plans a traditional wedding; Kev tried to find a way around V and Svetlana’s pending green card marriage. Did you watch last week’s episode? If you missed it, we have a full and detailed recap right here for you.

On tonight’s episode as per the Showtime synopsis, “Frank offers to pay for Fiona’s wedding reception and then goes scamming around town to raise the money. Meanwhile, Sean fears that Frank will end up hurting Fiona and confronts him on it. Their difference of opinion quickly descends into a brawl.”

Tonight’s Shameless season 6 episode 11 is going to be great, and you won’t want to miss it. So be sure to tune in for our live coverage of Shameless — tonight at 10 PM EST! While you wait for our recap, hit the comments and let us know how excited you are about the new season of the Shameless?

Tonight’s episode of Shameless kicks off with Fiona tossing and turning while Debbie is up with her screaming newborn baby – who she appropriately named Frances after her father. Down in the kitchen, Sean, Fiona, Frank, and Lip are all walking around like zombies and complaining about the baby. Fiona says that someone should go offer to help Debbie – just not her.

Fiona is making wedding arrangements, Frank overhears and announces that he is walking her down the aisle. It’s tradition – Fiona reminds him that it is also tradition that the father pays for the wedding, Frank says that won’t be a problem and he will come up with the cash. Then, he takes Liam and says that they are going to school. Instead he takes him to the street corner and makes up a sign, begging for money. He tells the strangers that Liam is an orphan and have AIDS.

Debbie tries to go to school too – but her teachers wont let her in to class with a screaming baby. Debbie whines that she wants to learn, and begs to pick up her assignments. Her teacher tells her to go talk to the guidance counselor about how she can finish school at home, and to start using condoms.

Lester the Immigration officer shows up at V and Kevin’s house bright and early to see if V and Svetlana’s marriage is the real deal. Kevin is irritated, and goes to the bar. He is jealous of his wife’s fake wife. At the bar Deb shows up, she explains to Lip that she and Frances got kicked out of school. She whines that it is discrimination. Lip tells Debbie that they are more than happy to help her, but she won’t let anyone help her.

Lip heads to Youens office – he brings along all of the work that he owed him. Youens is passed out half drunk on the couch. Lip tries to apologize for their argument, but Youens brushes him off. He tells him there are more papers on his desk that needed to be graded and goes back to sleep.

Frank shocks Fiona and actually shows up at the florist for her meeting. He pays the down payment with the change that he and Liam begged for all day. Afterwards they head to the diner, and Frank insists on helping Fiona make the guest list. Fiona asks what his sudden interest is in her happiness, Frank mumbles that he missed Debbie splattering a kid out on the kitchen table – he is tired of missing things. Afterwards, Sean warns Fiona not to get too attached to her father, it is only a matter of time before he bails on the wedding plans. He doesn’t want Fiona to get hurt.

Kevin heads home from work and V has bad news – the Immigration agent is not buying their happy marriage story. She needs Kevin to sleep on the couch, so that she and Svetlana can sleep together. V insists that it is only temporary and tells Kevin that it doesn’t mean anything. That night she and Svetlana have sex.

Ian is a trainee on his first ambulance – he comes home to the Gallagher’s house to meet Debbie’s new baby. Fiona is upset when she realizes that everyone in the house has gotten a chance to hold Frances but her. She heads upstairs and skips out on her sibling bonding.

The next morning Frank and Fiona head to a restaurant to see about booking a venue – Fiona is shocked when Frank pulls out $1,000 to pay for the rental. Little does she know that he shook down Debbie’s baby daddy’s parents for the money the night before – and threatened to press charges for Derek impregnating his underage daughter.

Debbie hasn’t slept since she brought the baby home from the hospital. She is home alone and sitting at the kitchen table nursing the baby, and trying to read out of a textbook when she dozes off and drops the newborn baby on the kitchen floor with an eery thud.

Lip and Youens are in front of a classroom full of kids and tensions finally hit the tipping point. Youens drags him out in the hallways and they have a screaming match. In the hallway, Youens screams to Lip that he is drunk, and he is fired.

At Ian’s job, they did a background check on him. His boss takes him aside and is not happy that he lied on his application and didn’t disclose that he had Bipolar disorder – she fires him on the spot.

Fiona and Sean head home and find Debbie crying and having a meltdown because she dropped her baby. Fiona and Sean give her a pep talk and reassure her that the baby is fine. Frank arrives at home – Sean demands to know where he got the grand to deposit on the wedding. Frank confesses that he blackmailed Debbie’s babydaddy’s parents. He and Sean have a blow-up and wind up beating the crap out of each other.

Lip heads out to the parking lot and proceeds to take a baseball bat to youen’s car. During his meltdown, he is arrested by campus police.

After the blood bath, Fiona kicks Frank out and tells him not to come back. Frank hops on a bus and tries to drink his whiskey. He meets a guy that was just fired and is desperate for money. Frank offers him $2,000 to kill Fiona’s fiancé Sean, and gives him half of the money up front.