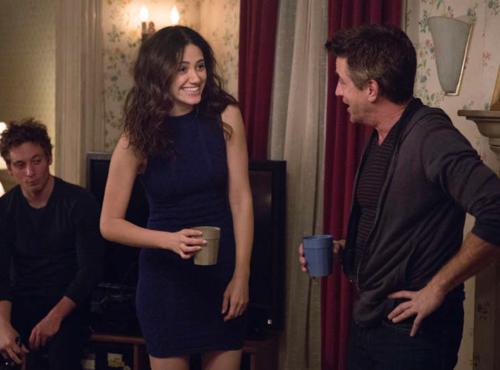 Tonight on Showtime the uniquely twisted and highly entertaining show Shameless returns with an all new Sunday March 20, season 6 episode 10 called “Paradise Lost” and we have your weekly recap below. On tonight’s episode, Sean officially moves into the Gallagher house; Fiona (Emmy Rossum) plans a traditional wedding.

On the last episode Fiona tried to make amends with Sean, who wasn’t giving her the time of day. Meanwhile, Debbie and Queenie traveled to a rural commune, along with Frank who was trying to escape G-Doggg after stealing drugs from him. Did you watch last week’s episode? If you missed it, we have a full and detailed recap right here for you.

On tonight’s episode as per the Showtime synopsis, “Sean officially moves into the Gallagher house; Fiona plans a traditional wedding; Kev tries to find a way around V and Svetlana’s pending green card marriage.”

Tonight’s Shameless season 6 episode 10 is going to be great, and you won’t want to miss it. So be sure to tune in for our live coverage of Shameless — tonight at 9 PM EST! While you wait for our recap, hit the comments and let us know how excited you are about the new season of the Shameless?

V and Svetlana are moving full steam ahead with their plans for a lesbian wedding so that Svetlana doesn’t get deported to Moscow. Kevin is going insane – he’s super jealous that V and Svetlana are spending so much time together and planning on getting married. He tells them to hold off on the wedding, and promises he will figure out another way to keep Svetlana in the country.

Now that Fiona is fully divorced, she is planning a shotgun wedding to Sean. Meanwhile, they are packing up Sean’s house and he is moving in to the Gallagher house. Fiona jokes that she and Carl did a sweep of the house with a metal detector and there aren’t any more weapons.

Carl is out on a date with his girlfriend, she wanted him to meet her father – who happens to be a police officer. And, it’s not going well – he obviously is not a fan of the Gallagher family. He invites Carl to ride around in his police cruiser for the day, so they can bond. He warns Carl that he “still thinks he is a piece of shit,” and he is just doing it for his daughter.

Frank stops by the birthing tent to talk to Debbie about baby names. Queenie tells Frank that he has been “challenged” by Jupiter. Apparently, they have a pit where they resolve their differences with other members of the commune. Frank and Jupiter strip down to their underwear and wrestle in a huge tub of mud – while everyone gathers around to watch. Frank is victorious.

Ian’s boyfriend drags him to the doctor’s office to get tested for HIV. Ian makes his boyfriend wait outside in the hallway. Afterwards, Ian says the results are negative and he runs off for EMT class. He’s acting strange, there is a good chance that he is lying and the test results weren’t good.

Lip’s boss convinces him to go to an interview for an internship. He seems to be nailing it. Meanwhile, across town his brother Ian is taking his EMT course. And, he looks like his in the zone too.

In the cop car, Carl’s girlfriend’s dad Winslow is trying to prove a point. While they are driving down the street they pass a random guy and Winslow pulls over to strip search him. Sure enough, he has drugs in his pocket. He says that Carl is as straight as the guy that he just found with drugs in his pocket.

At the hippy commune, Debbie is having second thoughts about giving birth there. The midwife hasn’t delivered a baby since 1983 and is a bit strange. Plus, she just realized that there are no drugs at the commune – she starts having contractions and begs Queenie to take her to a hospital. Queenie isn’t hearing of it. Frank is busy, apparently after his victory in the pit, he is quite the hot commodity – he has already had sex with Harmony and Moon.

Carl and Winslow can’t stand each other – but they bond over a call of two kids trying to steal a pick-up truck. Carl chases down one of the kids and tackles him and puts him in the back of the cop car. Winslow grumbles that he was supposed to wait in the car.

Lip gets home from his interview, and finds out that he is in a world of trouble, and he is evicted from the sorority house. Apparently, he blacked out at the party before he got his stomach pumped, and he peed on the President and tore all of their pledge class photos off the wall. And, now he has to go to mandatory alcohol counseling or else he will be expelled.

It’s time for Fiona’s bachelorette party. V and Svetlana have brought her to a male strip club, and they have a “special show” in store for her. While they are out, Kevin is busy working on finding a new identity for Svetlana, so she won’t be deported, he meets with a man off from Craiglist. And, manages to make it to the strip club in time to hop on stage with all of the old guys from the bar to strip for Fiona and the girls. Of course, Kermit takes it a bit far and does the “full monty” and rips off his G-string.

Winslow drops Carl off at home – and tells him that he still doesn’t trust him, and threatens to take him out if he finds out that he is sleeping with his daughter. He bumps in to Lip on his way in – he is moving home, because he has no where to go. He informs Lip he wants to be a cop when he grows up.

Debbie sneaks out of the birthing tent and wakes Frank up in the middle of the night. She cries to him that the baby is coming any minute, and they need to get to a real hospital ASAP. Frank whines that he loves the hippy commune, but he gets out of bed and does the right thing and dries Debbie home. He tells Debbie he wants her to have the baby in the house – that’s where all of the Gallagher kids born.

While Frank is talking to her, two of G-Dwag’s men jump out of a car and throw a pillow case over Frank’s head and kidnap him – he owes them thousands of dollars. They take him back to a building and begin to torture him with a blow torch –Frank convinces them to spare him, and promises he knows where there is a ton of opium.

At the Gallagher house, Debbie is already crowing and everyone is panicking. Fiona and V talk Debbie through it while she pushes on the kitchen table. In a few minutes she gives birth to a healthy baby girl and names her Frances after Frank.

Frank brings G-Dawg back to the commune and they sneak in to the greenhouse in the middle of the night where the opium is growing. Jupiter catches them and Frank sneaks out the back while Jupiter and G-Dawg proceed to shoot each other.

An ambulance arrives for Debbie – Fiona tries to climb in with Debbie and the baby, but Debbie won’t let her. She says that Fiona wanted her to do this on her own, and she is going to do it on her own. Debbie and Frances ride off to the hospital alone.