Shameless Live Recap and Review: Season 6 Episode 9 “A Yurt Of One’s Own” 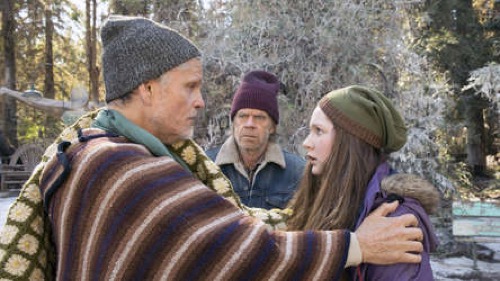 Tonight on Showtime the uniquely twisted and highly entertaining show Shameless returns with an all new Sunday March 13, season 6 episode 9 called “A Yurt Of One’s Own” and we have your weekly recap and review below. On tonight’s episode, Fiona (Emmy Rossum) tries to make amends with Sean. Debbie (Emma Kenney) and Queenie trek to a commune.

On the last episode, Fiona, now living with Sean, tries to get his son, Will, to like her. He starts to come around, but when Will snags one of Carl’s guns at the Gallagher house, Sean catches him and becomes furious with Fiona because he fears he will lose custody. Did you watch last week’s episode? If you missed it, we have a full and detailed recap right here for you.

On tonight’s episode as per the Showtime synopsis, “Fiona tries to make amends with Sean, who isn’t giving her the time of day. Meanwhile, Debbie and Queenie travel to a rural commune, along with Frank who is trying to escape G-Doggg after stealing drugs from him.”

Tonight’s Shameless season 6 episode 9 is going to be great, and you won’t want to miss it. So be sure to tune in for our live coverage of Shameless — tonight at 9 PM EST! While you wait for our recap, hit the comments and let us know how excited you are about the new season of the Shameless?

Tonight’s episode of Shameless kicks off with Frank Gallagher taking the corn rolls out of his hair – apparently he is retiring from being a drug mule. He’s sitting outside and rolling a joint when a black SUV pulls up and fires like 30 shots at him. Lamar is not happy about the cocaine that Frank snorted instead of delivering. Frank makes a run for it and manages to get away unharmed.

Ian comes downstairs and surprised to see that Fiona slept there last night and not at Sean’s house. She’s writing a letter to Sean’s ex-wife and trying to smooth over the whole gun drama. Debbie and Queenie head downstairs with suitcases. Debbie announces that she is dropping out of school and going to live at the commune with Queenie – where people will support her teen pregnancy. Fiona argues, but its pointless. Frank sees them leaving and hitches a ride to the commune to evade the drug dealers that want to kill him.

Frank, Queenie, Chuckie, and Debbie arrive at the commune – it’s not what Debbie expected, she is not impressed when she realizes there is no cell phone service and they live in tents. Frank isn’t too impressed either when the Founding Father, appropriately named Jupiter, greets them and kisses Queenie. He is creepily excited to have a pregnant teenager at the commune.

At the diner, Sean is giving Fiona the could shouler, he is still furious. Fiona’s husband shows up and apologizes for the way he treated her when she wanted him to help her buy the house. He reveals that he and his girlfriend are serious – and he is ready to sign the divorce papers. He asks Fiona to bring the engagement ring he gave her when they meet with their lawyers – apparently it was his Grandmother’s and she smuggled it out of Nazi Germany in her vagina many years ago.

At the Alibi Svetlana is giving one of the guys at the bar a hard time. She refuses to give him his change back and says it is her tip. Apparently, she picked the wrong guy to treat like crap – it turns out his name is Lester and he is an immigration officer. And, he knows that she is an illegal.

Back at the commune, Debbie is welcomed by the creepy cult. They all sit around a tent and chant her name. Apparently, Frank didn’t get a welcoming committee. Jupiter is thrilled to have the pregnant 15 year old living with them though. Afterwards, they move Debbie in to the maternity tent – which is basically a palace compared to the other tents. It’s full of fertility Gods, and meditation music, and the only heat in the place. Meanwhile, Frank and Chuckie are put to work by Jupiter – they get stuck manning the compost pile.

Fiona heads to the pawn shop where the she pawned the engagement ring. It’s still there – but the shop owner says that it will cost her $6,000 to buy it back. Fiona only has $500, she gives the pawn shop owner the $500 and he agrees to hold the ring for a few days while she tries to magically pull $6,000 out of thin air. She goes to see a divorce lawyer and he is overly ambitious – he turns Fiona’s quick and easy divorce in to a huge mess and informs Gus’s lawyer that they are coming after every penny. Obviously, Gus doesn’t take the news well.

V and Kevin are freaking out – they can barely run the bar and take care of the twins without Svetlana. She finally arrives and says that she is moving to Kentucky so that she doesn’t get deported. Kevin offers to marry her – but then he remembers that he is still married. Gay marriage is legal in Illinois, so V decides that she will marry Svetlana so that she can’t be deported. ‘

Lip convinces Ian to go to one of the sorority parties with him. While they are drinking, Ian gets a frantic phone call from Mandy. She says that she is in serious trouble and back in town – she tells him to come to the hotel and tells him he can’t tell Lip. Ian makes up a lame excuse and rushes out of the party.

The girl that Carl has been chasing relentlessly for months shows up at the diner looking for him. She wants him to record her playing her violin in the studio so that she can submit it to music camp. Apparently, she likes Carl now that he is no longer a “wanna be gangster.”

Ian arrives at the hotel, and apparently Mandy is a prostitute now. Her john is dead in the bathroom from an apparent overdose and she is high as a kite. Ian agrees to help her get rid of the body – they wrap it in plastic and try to figure out how they can get the dead guy out of the hotel room without the security cameras in the hallway catching them. Ian tries to talk some sense in to her and convince her to just call 911. She can just say that she met the guy at a bar – the cops don’t have to know that she is a hooker. Mandy finally caves and agrees to call 911.

Back at the sorority party Ian is a hot mess, and outdrinking all of the girls there. He’s been drinking since he met up with Ian earlier that morning. And, he keeps striking out with the girls at the party because sloppy drunks dudes that don’t even remember that they had sex with you already are apparently a huge turn-off.

At the diner, Fiona tries to talk to Sean – he is still not happy about his son playing with Carl’s guns. Fiona tries to tell him about the engagement ring and her divorce, but Sean doesn’t want to hear about it.

Lip wakes up in the hospital – he blacked out and was taken to the ER and treated for alcohol poisoning. The nurse explains that one of the girls that Lip was sleeping with, Brina, called 911. Lip tries to leave but the nurse says he has to stay there for a few more hours. Meanwhile, Mandy wakes up in Ian’s bed – apparently they had a slumber party after they called 911 and had the dead john carted away in a body bag. He invites her to breakfast and offers to wash her dress, which is covered in blood, for her.

At the diner, Fiona is getting ready to go to her divorce meeting. She and Sean have a huge fight because he is still giving her the cold shoulder. Sean can’t forgive her for the gun incident – Fiona shouts that she needs to focus on herself any way and heads outside and sits on a bench and has a meltdown.

Carl is upstairs with his little girlfriend – she confesses that she doesn’t really need him to record her playing the violin. Instead, she wants him to take her virginity because she is tired of being the only one of her friends who hasn’t lost it. She even brought along a condom – Carl is happy to help her out.

Lip heads back to the sorority house and curses out Brina. He thinks that she called the ambulance on him to get even with him because he forgot her name at the party. Brina says that she really thought that he was going to die, he was passed out in a snow bank, soaked in his own pee, and he wouldn’t wake up. Lip screams that she should have let him sleep it off and he can’t afford the hospital bill.

At the divorce meeting, Gus’s lawyer announces that the ring is gone from the pawn shop – so she owes him $15,000. Since she doesn’t have the money, he is going after Fiona’s house. Fiona isn’t going down without a fight – her lawyer is going after Gus for every penny that he is worth, even his frequent flyer miles.

Ian and Mandy say their goodbyes, she reassures Ian that she is going to be okay. Lip arrives at the Gallagher house as Mandy is leaving. He doesn’t bother to tell Ian about his trip to the hospital – he says the party was boring. Carl runs downstairs and borrows a condom from Ian and heads back to the bedroom.

At the commune – Frank informs Queenie that he is going home. This is nothing that he thought it would be like, they don’t even smoke weed. What kind of a hippy commune doesn’t smoke weed? Queenie says she has to show Frank something that will change his mind. Apparently, they don’t smoke weed. But, they do have a green house full of opium that is almost ready to harvest.

At the divorce meeting, Sean shows up unexpected. He tells Fiona he is still upset – but he doesn’t want to lose her. He is the one who bought the engagement ring from the pawn shop, so that she can give it back to Gus and avoid the messy divorce. Then, Sean gets down on one knee and proposes to Fiona right in front of Gus and the lawyers.