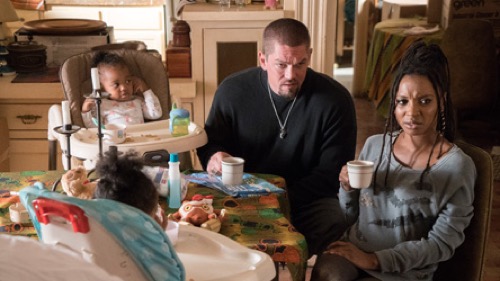 Tonight on Showtime the uniquely twisted and highly entertaining show Shameless returns with an all new Sunday February 14, season 6 episode 6 called “NSFW” and we have your weekly recap below. On tonight’s episode, Ian’s (Cameron Monaghan) relationship with Caleb (Jeff Pierre) gets more serious. Meanwhile, Lip (Jeremy White) is called to appear before a faculty disciplinary committee.

On the last episode Frank helped Erica through the cancer concierge process; Debbie uped her game as a shoulder for Tyler to lean on; Lip tried to protect Helene from the fallout of Amanda’s disclosure, but she refused to see him anymore. Did you watch last week’s episode? If you missed it, we have a full and detailed recap right here for you.

On tonight’s episode as per the Showtime synopsis, “Ian’s relationship with Caleb gets more serious. Meanwhile, Lip is called to appear before a faculty disciplinary committee, but Helene accepts the blame for the scandal and tells the committee she will no longer teach or see Lip.”

Tonight’s Shameless season 6 episode 6 is going to be great, and you won’t want to miss it. So be sure to tune in for our live coverage of Shameless — tonight at 10 PM EST! While you wait for our recap, hit the comments and let us know how excited you are about the new season of the Shameless?

Tonight’s episode of Shameless kicks off with Carl at the hotel – he’s living the good life, and hundreds of cheerleaders just rolled in for the nationals. Meanwhile, the rest of the Galaghers aren’t exactly living like high-rollers. Debbie wakes up in bed with Erica, apparently she crawled in to bed with Debbie when she was wasted. She apologizes for groping her in the night. When Debbie heads downstairs, Frank tries to play matchmaker and tells Debbie that Erica definitely has “the sweets” for her.

Fiona is not adjusting well to her relocation – and the pregnancy hormones are making her an emotional basketcase. She jumps out of bed and remembers that she left something at the old house – she has to go get it before the new owners move in. Fiona kisses her boyfriend goodbye and curses the pregnancy hormones – she mumbles that she can’t wait for her abortion so that she can “get it sucked out.”

Ian is staying in Lip’s dorm room with him – Ian is trying to ask his big bro for dating advice by Lip is a bit distracted. The photo he took of his professor has gone viral, and someone posted it on Gawker. Lip received an email from the school, he has to go before a Disciplinary Hearing because of the naked photo.

Frank tags along with Debbie to her first ultrasound – he reminisces about the first time he “saw Fiona in her mom’s gut.” The nurse asks Debbie if she wants to know the gender, the Frank warns her that once you know the gender the fetus turns from a clump of cells to a person. Debbie is unsure – so the nurse writes down the baby’s gender and puts it in an envelope so that Debbie can open it when she is ready. Debbie heads home and Erica thinks that she should wait to open the envelope and have a big gender reveal party. Debbie gets creeped out because Erica grabs her hand across the table.

Fiona breaks in to her old house to get something out of the closet, while she is there she overhears the new owner getting a home inspection. It’s going to cost him over $150,000 to do all of the repairs on the house. The inspector advises the new owner to “throw the turd back in the sewer.” Fiona rushes to the bank and they confirm that the new owner has backed out, so now all she needs is her downpayment and a notarized document that she and her spouse are separated and he doesn’t have any rights to the house.

Debbie rushes to the Alamo and tells Frank that she thinks he is right – Erica is definitely a lesbian and has been hitting on her. Frank got bad news, Erica is in remission and she is not going to die. Apparently, he hasn’t given Erica the news though. Frank tells Debbie she is going to have to step it up and give her a little scissor action if she wants a nice house to raise her baby in because Erica isn’t going anywhere.

Lip tries to talk to Helene – but she jumps in her car and drives off and won’t give him the time of day. He rushes to Amanda’s dorm and begs her to go tell the Disciplinary Board that it was all a misunderstanding and she was just jealous. Amanda has no idea what he is talking about, she isn’t going to the hearing, she is going home because the campus feminists are sending her death threats.

Fiona is at the diner on her phone trying to get a hold of Gus so that he can sign the papers for the house. Debbie stops by with her “new family” – Erica’s kids. She tells Fiona about her gender reveal party, and Fiona reveals that she is getting an abortion in the morning. They wind up getting in another argument over Debbie keeping the baby and she storms off.

Gus finally agrees to meet Fiona at the Alamo – while she is sitting there waiting for hours, Kevin is busy fighting the war against the hipsters. He throws out another guy with a man-bun, while Fiona argues with Frank. Frank is happy that she is buying back the house, because he and Debbie might need a new place to stay now that Erica isn’t dying. Fiona heads home when Gus doesn’t show up – Shawn is waiting for her, he tells her to get some rest before her abortion in the morning.

The next day Lip goes before the Disciplinary Hearing and they want to know about his relationship with Helena, and how they began sleeping together. Lip confesses that he had a “sexual encounter” with Helene the first time he went to her office, but she didn’t coerce him. The Disciplinary Hearing is more interested in whether or not Helena offered to change his grades for having sex with her. Lip gets frustrated and insists that their relationship was consensual.

Fiona heads to her abortion in the morning – she goes through with the procedure and Shawn is waiting for her in the waiting room. Fiona insists that it was no big deal and she is actually going to go back to work later, but first she needs a milk shake. While they are having lunch Gus sends another text to Fiona about meeting up with her, she’s getting fed up with the games. Shawn doesn’t understand why Fiona is so obsessed with getting the house back, she really doesn’t need it and her family is all over the place now.

Ian heads to his new boyfriend Caleb’s shop where he works on his sculptures. Caleb says that he “loves to find the treasure inside the trash.” Ian takes it a bit personal and thinks that Caleb looks at him as trash and is trying to find a treasure in him. They share their first kiss.

It’s time for Debbie’s gender reveal party – the only people that show up are Frank and Carl. While they are getting ready to open the cupcakes and find out whether the baby is a boy or a girl – Erica’s doctor calls her and tells her that she is in remission. Debbie panics and says that she is going to name the baby after Erica, or Eric if it is a boy.

Meanwhile, Lip’s Disciplinary Hearing is not going well. Helene arrives and reads a statement, she says that it was all a mistake and she is willing to take some time off from work if they don’t fire her, and seek treatment for sex addiction since this isn’t the first student that she has slept with. Lip freaks out, and he shouts that they were in love, it wasn’t an addiction.

Nick finds the kid that stole his bike – he can’t be older than `10 or 11. Carl tells Nick to let it go, it isn’t worth it, they just need to keep their head in the game and make enough money so that Nick can get the farm he has always dreamed of. Nick agrees, but as soon as Carl isn’t paying attention he drives off. Carl grabs a skateboard and races to the bike theif’s house, but when he arrives he is too late. Nick is sitting outside on the porch with a bloody hammer and a woman is screaming bloody murder inside. Nick tells Carl to beat it before the cops arrive. Carl looks inside the house, throws up over the porch railing, and runs off as the cop cars pull up. He’s so shaken up over Nick murdering the kid that he shows up on Shawn’s doorstep and asks if he can sleep there.

Frank is sleeping under the house with his grandson – Sami is still in jail. In the morning Frank hears a familiar voice – it’s Queeni. Apparently Sami called her from jail and asked her to come pick up the boy. Her rescue mission goes awry when Frank turn on his charm and tells her to take off her pants.

Fiona finally meets up with Gus, he calls her a “lying sack of shit and a cheater” – he refuses to sign the papers for her. She is devastated and heads home and sobs to Shawn that she can’t get the house back. The next morning Carl goes to the park and digs up his and Nick’s duffle bag full of cash. He drops it off at the diner and tells Fiona to buy back the house with the money.