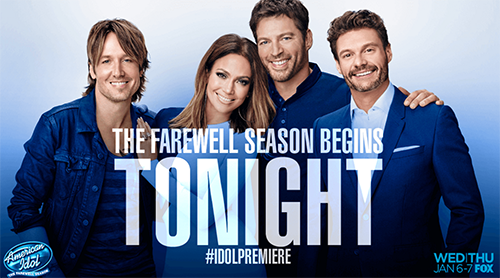 ‘American Idol’ 2016 spoilers have been teasing for over a year now that Season 15 of Idol (currently airing on FOX), will be the show’s “farewell season.” In 2015, the network confirmed that they were pulling the plug on the singing competition, which has aired for over a decade – however, the last few years, ratings have been less than stellar.

A new interview with ‘American Idol’ head honcho and creator Simon Fuller teases that this really isn’t the end of Idol at all. It looks like ‘American Idol’ fans have been bamboozled by TPTB. Sure, FOX is cancelling ‘American Idol’, but are they bringing the show back, only in a different format?

Simon Fuller had some interesting things to say to The Hollywood Reporter about the cancellation and rebirth of the iconic singing competition – which as it turns out is far from over. What better way to bring up ratings for Season 15 than to market it as the “farewell season” – even though the show really isn’t saying “farewell,” and is basically just getting a new format and possible a less than creative name like “American Idol 2.0?”

Simon Fuller explained to The Hollywood Reporter, “There will no doubt be another format or refinement or elevation of the format. Now I can actually revamp it and come up with a new version. And we can look back on 15 seasons and think of some legitimate ways to allow people to enjoy them again, maybe adding another dimension to it.”

‘American Idol’ spoilers tease that the three night finale will air on FOX this week – and on Thursday, April 7, the Season 15 winner will be announced. At this stage in the game, there really isn’t too much build-up for the farewell season’s finale – the odds of pigs flying through the studio are actually higher than La’Porsha Renae not winning Season 15. But, good news for ‘Idol’ fans, we will probably get to see a new winner crowned again next year because the show isn’t really going anywhere. Very sneaky FOX, very sneaky!