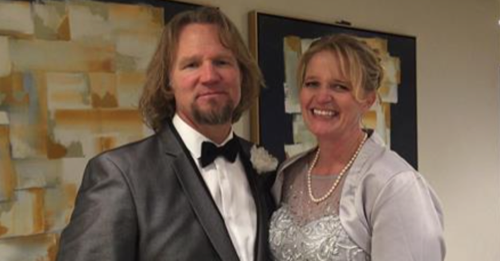 The wedding was finally happening however, the last seventy-two hours before the “I Dos” had been hectic for pretty much everyone involved. The bride who was one of Kody’s older daughters, Maddison, had had this idea for her wedding and she wanted to see her vision come to life. But to actual take charge by directing people and making sure her bohemian theme was carried out had been stressful for her. Maddie hadn’t been able to eat a single thing in the countdown and she was still losing weight. So she was trying to drink juice to sustain herself when her father came out of nowhere with some of his reservations.

Kody liked the groom and he had known the groom’s family for years. However, he was nervous about officiating the wedding. Kody was smart enough to realize that the job might be difficult seeing as he had never done it before and so he did he freak out. He knew that the job was supposed to originally go to Caleb’s father Mike and that he had only gotten it because Mike had recently lost his wife and wasn’t in the right frame of mind to officiate the wedding yet there was a part of Kody that wanted to pass the job onto someone more qualified. So he had freaked out and he had taken his concerns to his daughter.

Yet, there was really nothing Maddie or Caleb could do that would help Kody realize that there was nothing to be nervous about. The couple had already turned to him in their hour of need and that had more than showed how much they trusted him. So Kody knew that he needed to snap out of it though he had wanted pointers and had therefore turned to Mike. Mike was an easy-going guy so talking to him about his nerves hadn’t been a problem for Kody and it turns out that Mike was someone that he could bounce his ideas off of. Kody had apparently tried to write the vows without any help and it had been a bit of a mess because his ideas had been over the place.

So talking to Mike had helped Kody focus some of his ideas. Kody had previously thought that he could some of the bar mitzvah ritual that he had used with Logan in the ceremony and so he had come up with the idea of “elevating: Caleb thanks to Mike. Mike had called his son a knight and Kody had said that his daughter was a princess so Kody thought what if the kids’ marriage would turn them into a King and Queen with a happy ending of their own. And Kody had been so excited about his idea that he had wanted it to be a surprise for the happy couple. Though said couple later realized that maybe they should find out what Kody was doing with the vows.

Maddie and Caleb had come up with a way for both fathers to stand up at the altar and it had been sweet. But then they saw Kody’s journals and heard him describe it as his wishes for Maddie and how he was going to use it for ideas. So they had wanted to know where he was going to go with those ideas and just worried them even more , when he kept being evasive. Kody said he still had ideas floating around and to them that meant he had nothing concrete however there had other things to worry about and so the vows proved to be the least stressful. And what was on the other end of that stress was the rehearsal.

The rehearsal had needed several tries before the wedding party could get it right and at first the sister wives didn’t see why they needed a rehearsal to begin with. However, weddings in the plural marriage community was a lot different than other weddings. The sister wives had said that they never needed to walk down an aisle or rehearse anything because the focus of their ceremonies had been about the religious aspect and the commitment they were making. So they were basically going off of what they had seen in the movies with their assumptions and didn’t know how long a rehearsal was going to run until they began to rehearse.

There was a problem with the wedding party following the music and more than one person was not happy with how they came went down the aisle. So the rehearsal could have knocked down anyone and it had almost done so to Maddie who was trying to herd her family though she had gotten lucky because she had had someone to turn to help organize the wedding. Maddie had asked Meri to see that everything that she couldn’t and Meri had been great at that. Meri had gotten everyone down the aisle during practice so Kody had joked about that. He said Maddie got to be the bride while she left the zilla duties to Meri. Yet, Meri had to do lot in order to get everything ready.

Meri had had to help set up the venue, set up the reception, and then see to it that everyone walked down the aisle after five seconds. Though while Meri was getting everything ready, everyone else got the opportunity to relax on the day of the wedding and simply enjoy themselves. Caleb for instance, had played practical joke on Maddie and he had gotten off easy when Maddie realized he hadn’t lost key parts to the wedding entire. So really the day of had been calm. The bridesmaids had all taken their cues from Maddie and Maddie hadn’t freaked out like everyone expected. And she was actually one of the few that didn’t weep beforehand.

But eventually everyone became emotional and Maddie had brought on a few tears with her letters. Maddie had found out that some brides write letters to their parents expressing their gratitude for how they were raised and so she did that with all five of her parents. She wrote them letters saying that it hadn’t always been easy raising her however they had helped her find the right path in life and that she found her true love because of how she was raised. So they had opened the floodgates and one of the people that the letters hit had been Erica. Erica had been married to Maddie’s uncle Curtis and he had passed away frankly too soon in life.

So Erica had missed her husband and she had also wanted her mother around to see Caleb get married yet she had to pull herself together because she knew that she had to stand in her mother’s place for Caleb. However, Caleb had cried as well when he read the letter. He had heard Maddie tell him how much she loved him and how proud she would be to become his wife so he just broke down. And so the usually stoic Caleb had been left in tears and he also had to pull himself together to get married. Maddie and Meri had gone through a lot and in the end the wedding had looked as they planned which was gypsy bohemian.

Maddie’s dress on the other hand wasn’t really in tune with her theme so she had to deck herself out with jewelry to fully bring out that gypsy angle. Though she got there and she did look like a bohemian gypsy princess come to life and her father had thought she was perfect. Kody had said that he had married beauties and that he knew Maddie was the most beautiful bride in the world, but Maddie knew that her father was a charmer because she said that’s how he got four women to marry him. So Maddie had chosen to bask in the compliments and she had been glowing all the way down the aisle.

Maddie had kept smiling and no one could help themselves with smiling as well. But the beginning ceremony had gone glowingly and Kody’s idea wasn’t half-baked at all. Kody had had Mike stand up with him as they went about knighting Caleb and making him sear to remain a servant of god. So that had definitely upped the wow factor and more importantly it hadn’t come off as cheesy as Kody originally thought it was going to be however the ceremony itself had been hard on Kody. He had teared up as he was beginning the ceremony and getting through the vows without having his voice crack under emotion had been a hardship.

So naturally Kody forgot something as he trying to rush through the vows. He forgot the part about exchanging rings and didn’t remember it until after he had announced Maddie and Caleb as married. Kody had explained that the ring exchange hadn’t happened with him and his four wives so that’s why he didn’t remember it yet his goof wasn’t a problem for the couple. Maddie and Caleb had simply made time for it later on and it turned out that it was a good thing they didn’t try to do that in front of everyone because the ring unfortunately didn’t fit Maddie. However, that was also something they took in the stride.

Yet, the rest of the evening had gone a little better. The families had all gotten the chance to congratulate the couple and Janelle had even gotten through her speech which was good for her. Janelle sometimes has a hard time with being the focus of anything though she had said what she wanted to say and it hadn’t been bad at all. So the reception did go off well and the highlight had been the groom’s cake. Kody had sort of ruined the groom’s cake by telling the groom he was going to get an elk cake only no one had suspected that the bakery would make such a life like elk cake or that Christine’s idea would make it even more realistic.

Christine had apparently come up with the idea to make the elk cake a red velvet so that it looked like it was bleeding when they cut into and that color along with thick fondant did make it seem like they were cutting into a real elk. Though funnily enough it had been too real for Christine and she hadn’t been able to eat a single slice because she said that it looked alive. So what she detested, everyone else loved and the couple ended up forgoing their actual wedding cake in favor of cutting the groom’s cake.