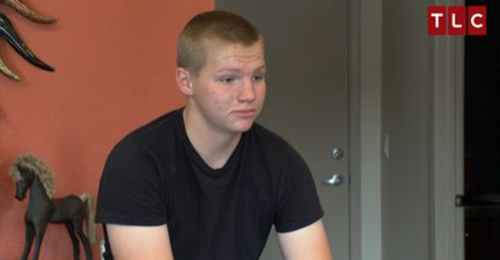 TLC’s reality show Sister Wives returns tonight with an all new Sunday May 15, season 6 episode 13 called “Confessions and Polygamy Perks” and we have your weekly recap below. On tonight’s episode, the sister wives attend a therapy session together with their husband Kody Brown.

On the last episode, in the season premiere, a therapist helped the family deal with the aftermath of Meri’s scandalous catfishing incident. Did you watch the last episode? If you missed it we have a full and detailed recap right here for you.

On tonight’s episode as per TLC’s synopsis, “The Sister Wives attend a therapy session that comes after an emotional season premiere in which their husband Kody Brown confronted Meri about the catfishing scandal that shook their household. Also both Meri and Janelle had some bad blood between them recently, but were attempting to put their family first.”

Three weeks have passed since the adults sat down for a therapy session with Nancy and yet there’s a lot that’s been left unsaid. Apparently both Kody and Meri felt it was better to focus on the kids and the dramatic changes that were going on in their young lives. So in the meantime the couple put most of what was going on between them on backburner and unfortunately their decision led to them acting as if they were walking on eggshells around each other. And Meri also spent a lot of time back on her cell and/or computer.

But the family as a whole tried to do their best to readjust to their new reality. Like Madison’s upcoming wedding and both Aspyn and Mykelti beginning their adult lives. Madison’s choice was something that the family saw coming however Aspyn and Mykelti had surprised everyone. Aspyn who had always said that she wouldn’t mmove back home, was moving back home. Just not to her mother’s house.

Aspyn and Christine have had some run-ins lately so Aspyn thought that she should move into one of her other mother’s homes. And she chose to ask Robyn if she could live with her. So that kind of put Robyn in a difficult situation. Robyn didn’t mind if Aspyn moved in with her because the two have a good relationship and so her main problem with the idea was Christine because she didn’t want to hurt Christine’s feelings or make the other woman feel like she was being cut out. However, Christine told them that she was fine with it.

Christine herself had been raised in a polygamous household and so she knew what it was like to trust some of her other mothers and to view them as a confidante. Yet, there were some teary expressions from Christine on tonight’s episode and maybe she still needed to adjust to Aspyn moving in with someone else although there was also Mykelti to think about. Mykelti had taken some time from college to figure some things out and, while Mykelti’s family wanted her to go back to college, Mykelti clearly wanted to break out on her own.

Mykelti and her sister Aspyn had shared an apartment while they were at school, but the ladies had gone through some default times. What with Mykelti being the free spirit that she is and her older sister had often tried to acted as a mother hen. So Mykelti hadn’t really wanted to move back home. And thankfully her father introduced her to a friend of his that she could work for and who would also become her landlord.

And when it wasn’t the girls growing up, it was Kody and Janelle’s son Garrison that was worrying everyone. Garrison had gone to recruitment centers and he had talked to some people there about enlisting at seventeen so that’s where his interest went and what he wanted to do. Though naturally his parents didn’t want him to enlist so young and they actually wanted to go to college first. Which wasn’t something that Garrison himself was interested in.

Garrison wanted to join the Nation Guard and he didn’t want to wait. However, his family and especially his older brother hunter felt like he should at least take a step back to think about things. The National Guard wasn’t like the Air Force that Hunter wanted to join. They send men in on the ground and, what with the US being constantly at war, both Kody and Hunter worried about Garrison being deployed in the next few years.

Yet, Janelle felt like that there was nothing she could say or do that would stop Garrison. So she had done her best to just support his decision and try make peace with Garrison joining the National Guard. And later Garrison enlisted with his family’s approval.

Meanwhile, though, Meri’s seclusion was still as bad as it was when she had been catfished. Meri it seems had been suffering from some health problems and so she had initially thought her massive weight loss was because of stress from the catfish. Only later her doctor ended up finding something on an ultrasound. So Meri had to wait around for results and for some reason she didn’t tell anyone about her scare.

Again she kept something big to herself. So she later went back to her doctor’s by herself and fortunately all she had was a fibroid. Which was small and quite common. But the situation showed that Meri still wasn’t comfortable talking to everyone else about what was going on with her.

However, there was one part of her life that she did wish to talk about. Meri was open to talking about her past with Janelle. Janelle and Meri have had a very strained relationship and surprisingly it wasn’t always like that. They used to be friends and Janelle had in fact been married to Meri’s brother for a while before getting a divorce after less than a year. So they weren’t strangers when Kody began to court Janelle, but they weren’t best friends either. And both ladies had hoped things would go that way following Janelle’s marriage to Kody.

Only it didn’t and jealousy plus two distinctive personalities ended up ruining their earlier chances at becoming friends.

Kody and Meri had been married for six months when they needed a new place to live. So they had accepted Janelle’s offer at renting parts of her house. And so that’s when the three of them had become constantly a part of each other’s lives, but they didn’t take that dynamic into their plural marriage. Nor they did try to fix what was broken.

Meri admits to being jealous during the early days of Janelle marrying in and so she had tried to address some of those issues with Janelle however Janelle didn’t not how to respond to the way Meri confronts a problem. Meri has always been loud and outspoken. So she had gone to Janelle expressing everything that was wrong and how she was feeling. Yet, Janelle had seen that as conflict so she distanced herself from it because she said she didn’t know how to deal with it.

And so for a while the two of them have just ignored their issues. Though Christine marrying in had helped in how they dealt with each other. Christine like Meri had grown in a plural family so she knew how to address some of Meri’s issues and at the same time she made sure to act as the intermediary between Meri and Janelle. So it had basically been Christine that saw the two women come together.

Christine though has had her own issues with her role within the family and that had been addressed on last season. So it wasn’t easy being part of a plural family, but the ladies have all said that it gets better once you try. Try to open up to your other sister wives and try to build bridges. And after Christine was done throwing a baby shower for Robyn’s new baby, Meri and Janelle had gone back to discussing therapy.

The two of them have been suppressing a lot of things that should have been said years ago. And they were simply going to continue to ignore the way their relationship was yet somewhere along the way Janelle finally realized that maybe it was time to talk. So she had gone to Meri and had asked the other woman to go with her to therapy with Nancy. And Meri’s first reaction had been to think about it. Which wasn’t exactly a “no”, but not an enthusiastic “yes” either.

So once Meri had gotten over their past issues with her being the one to bring up therapy and getting turned down by Janelle, she agreed to talk things out with Janelle. And the two went to go see Nancy who they both felt would be best at helping them get through certain things. However, Nancy didn’t take it easy on them. She had them impersonate the other so they could tell the other person how they sometimes feel during a conversation with them.

And later Nancy had suggested that they try to do something together. But as it turns out Janelle and Meri shouldn’t shop together. Janelle has a process that means she takes probably more time than Meri is comfortable with to make a purchase while Meri sprouts off at the mouth and only thinks about what she says later. So that was a problem they both quickly caught onto and yet they were making more of an effort.

They knew it wasn’t going to be easy and yet the difference this time was that they’ve finally are committed to seeing things improve.