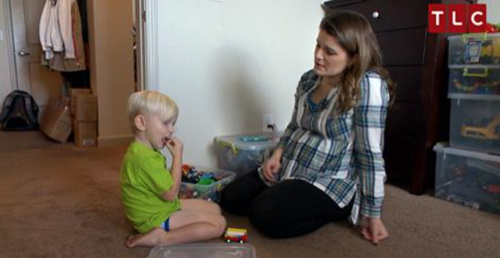 TLC’s reality show Sister Wives returns tonight with an all new Sunday May 8, season 6 episode 12 called “Catfishing Fallout” and we have your weekly recap below. On tonight’s episode, in the season 6 spring premiere, a therapist helps the family deal with the aftermath of Meri’s scandalous catfishing incident.

On the last episode, the Browns answer questioned on a wide range of topics, including Robyn’s pregnancy and Meri’s catfishing bombshell. Did you watch the last episode? If you missed it we have a full and detailed recap right here for you.

On tonight’s episode as per TLC’s synopsis, “in the season premiere, a therapist helps the family deal with the aftermath of Meri’s scandalous catfishing incident. Meanwhile, Madison prepares to move to Montana to be with her fiancé, Caleb; and the Browns get ready for their newest member.”

Things are changing in the Brown household and not always for the better. After last season when it was revealed that Meri had been catfished by someone she was having an emotional with, the family and most importantly the adults were kind of left wondering what next. Meri had said and done a lot of things these past few months that essentially separated her from the family yet she still or at least claimed that she still wanted to be married to Kody. So Kody and Meri’s fellow sister wives have tried to reach out to her since the big reveal because they want to figure out why things had gotten so bad between her and the rest of them.

However, there was one thing that managed to divert some of the family’s attention on tonight’s all new episode of “Sister Wives”. Maddie who has always said that she would one day want to enter monogamous marriage had previously met a man that she became very serious about. So much so that she was willing to move to be with him and see where their relationship goes, but that doesn’t really matter anymore. Because Maddie is now engaged.

Maddie is engaged to old family friend Caleb who everyone seems to love and, surprisingly for his first daughter to get engaged, Kody was very cool with it. He said he liked Caleb and that he knows Maddie will be happy. Though his wives on his other hand said the true impact of Maddie’s engagement and then eventual marriage won’t hit him until he walks her down the aisle. So he told everyone that was going to be a wait and see however they soon saw him getting far emotional than he was letting on.

Maddie’s situation had changed and, now that she’s engaged, she didn’t think it was necessary to leave anymore of her stuff at her mom’s place. So she took a leap. She packed up all of her stuff there and she was moving to be nearer to Caleb where she hopes to find a job soon. Although it should be noted that the couple will technically not be living together until they’re married. And again Kody tried to appear as if he wasn’t bothered by his daughter moving away.

Kody had in fact helped Maddie put most of her stuff in Caleb’s pickup and he later gave them all of Robyn’s old living room furniture because she was getting a new one and they would have given away her old one anyways. But while they were moving the furniture, Kody noticed that one of the legs was loose so he decided to fix it right then and there. Which was time consuming yet he wanted to be the one that fixed things for her before handing that baton over to Caleb. So Kody was going to miss Maddie.

Whether he wanted to admit it or not. So maybe that’s why he also invited himself along on Maddie dinner to celebrate her last night in Las Vegas. Maddie and Caleb were supposed to have dinner with just her friend Dezi however Kody invited himself as well as Christine and Janelle along. And therefore they got to quiz Dezi about what Maddie has told her.

And it seems Maddie had been a lot more honest with her friend than with her parents. Maddie had apparently told Dezi about Caleb three years ago so that was before her parents had known about him. Yet, they knew they couldn’t take it to heart. Dezi was her friend and she actually saw Maddie as an adult which is something that the older Browns couldn’t do. They had known Maddie as a baby then as the daddy’s girl that would make up dances just for dad so it turns out that Maddie’s friend helped put things in perspective.

As long as Caleb had the friend’s approval then they knew that Maddie would be safe and happy with him. Though with one child moving away, there was also a new baby arriving. Robyn had found out that she was pregnant with a girl a while back and so she was preparing for the birth of that daughter’s on tonight’s episode. And her biggest problem with her preparations had been Solomon.

The little boy wasn’t all that excited to share his room with a baby, but thankfully he did like the idea of becoming a big brother. Solomon had always been the baby of the family after all. Though he appeared to be really close with his sister Truely who was merely a year older than him. So maybe that helped him to see what kind of relationship he’s going to have with his new sister.

But the family still had to deal with the fallout of what Meri did and eventually they did get back to that. Meri had said that she had been in a vulnerable place when she thought she met a guy that had understood her. Only that guy was later proven to be a woman and the woman had targeted Meri with malicious intentions. So to get to bottom of why she had been vulnerable, the family called their good friend Nancy.

Nancy is the family’s therapist and there have admittedly been problems in the past yet nothing like this. Meri went into depth on what happened and it was just a mess. She and Kody have both said that they were struggling in their marriage when he noticed that she began to have a lot more friends met online. And he had told her that she should pull away from those people. However, Meri didn’t want to listen to him because their relationship had been so fractured.

And pulling away from him because she thought he wanted to get rid of her friends, that left wide open to someone claiming to be a man. A man that listened to Meri and flattered her. Even saying that he loved her. Only things began to change after he told her about this friend he wanted to meet in person and this female friend reiterated everything he said, but somehow managed to add subtle threats. That did get less subtle as time went on.

Meri was told that her house was bugged and that she was being followed. So she took things seriously when her online friend then mentioned that “he” didn’t want her to be around her family anymore. And so that’s when she began to distance herself from them because she didn’t want to put them in danger. Yet, the threats and verbally abuse just got worse because the bully found out how she could get Meri to comply.

Meri’s weakness was her family. Once they were threatened and she began to worry about what will happen to them, she went on to do literally everything this person wanted her to do. And even let this person get into her head after they had finished isolating her. So that might have been this person’s goal all along.

Meri’s self-isolation made her more vulnerable and so that’s how this person managed to make her question her beliefs. Like the entire polygamous lifestyle for instance. So that had gone on to further the distance between her Kody. Yet, there was something that Kody needed to know more than anything. And that was if Meri still wanted to be married to him.

There have been times when she’s implied that she doesn’t to leave her family, but she doesn’t want to stay married to him. So he wanted to know where their relationship stood and the only thing she could say was that she was angry. She was angry at Kody because there was a part of her that blamed him or better yet their relationship for why she sought out companionship elsewhere. And there was another part of her that hated just everything.

Including the way she allowed this person to get into her head!

So there was no clear answer on what would happen next and everything is simply up in the air for now.