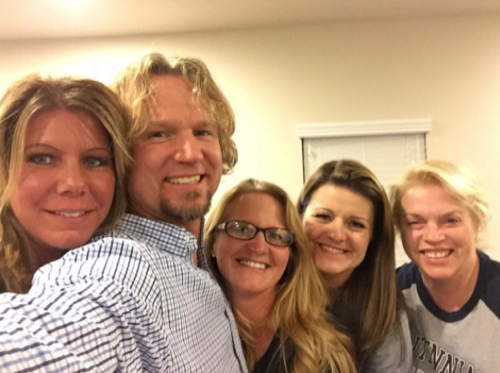 TLC’s reality show Sister Wives returns tonight with an all new Sunday September 27, season 6 episode 3 called “Marriage Counseling Texas Style” and we have your weekly recap below. On tonight’s episode, an anniversary trip to Texas turns into couples therapy for Christine and Kody.

On the last episode, Meri got emotional when she tried to tell the kids about the marriage-license shift to Robyn. Also: Kody wanted to adopt Robyn’s children from a previous relationship, but he wondered what her ex will have to say about it. A profile of Janelle includes her explanation of how she was introduced to polygamy; her reaction to gaining a new sister wife; and a look at her struggle to lose weight. Did you watch the last episode? If you missed it we have a full and detailed recap right here for you.

On tonight’s episode as per TLC’s synopsis, “an anniversary trip to Texas turns into couples therapy for Christine and Kody. Meanwhile, the process of adopting Robyn’s children begins as the family meets with their lawyer.”

The Browns are going ahead with the adoption but, because of a slight setback, they then had to begin looking for a new lawyer on tonight’s episode of “Sister Wives”.

Apparently Robyn and Kody had tried to file for full custody and adoption of her older kids from her first marriage in Montana. That’s where Robyn’s ex is and so they believe he wouldn’t be able to avoid it or create later if they brought the fight to his home turf so to speak. However the judge there felt that the case should be tried in their state because that’s where the family is located. Particularly the children. So the new lawyer they had approached had to somehow get their case tried back to Montana. And once the lawyer they were looking at said he could do it, Kody literally hired him on the spot.

The dream would be for Robyn’s ex to sign off on his parental rights willingly but if he fights and is given an excuse to later say the court was biased or what have you – then that will set the family back. And they would have to start all over again.

But the main goal with all of this is to do what’s best for the kids and so no one wants a long drawn court battle.

That would be putting the kids in the middle and simply talking about it has already undone Robyn. She had to step away during one of their couch moments with the producers because she couldn’t breathe. And later, after she had regrouped, Robyn still appeared a little frazzled when she admitted that she couldn’t wait for all the paperwork to be finally done.

Yet, in the middle of all of this, Kody and Christine had an anniversary and so this year Kody chose to take Christine away on sort of a getaway/ couples’ therapy combo.

It seems there have been a few roadblocks in their relationship. And it’s not like it’s new. There’s been problems from the very beginning with Christine’s jealousy and with the way both of them have handled issues in the past. So that’s why their trip turned into a therapy session after they decided to invite their family therapist along.

They were hoping their newest therapist Nancy could help.

And Nancy ended up having a long list to go through. See Christine has a habit of interrupting anytime they’re having fun with suddenly wanting to talk. And she did that again on the trip.

But talking turned out to be another problem for these two. In the early days of their marriage, Christine had tried to voice discontent by lashing out. And she said things that she didn’t really man but that had Kody shut down on her.

She once said she didn’t believe in the principle and that she was jealous all the time. Though what she meant was that it hurt to watch him have romantic relationship with others while their relationship and communication was struggling. So Kody tends to take most of their current arguments back to that moment.

And that may justify why he often tries to tell her to trust him whenever they run in a disagreement.

And though Christine didn’t want to follow Kody, he refused to listen her or her idea. So she just dropped what she wanted to do and in her own words “lose with grace”.

Afterwards, Kody admitted that he knew he had railroaded her a bit but he had his reasons. He said that it wanted to use theme of family for their structure because that is what’s most important. Not a single romance when she came into his family once it had been well established.

And when he says things like that, it makes Christine feel like he thinks she hates her sister wives when she doesn’t.

So at the end of their trip they had to come to a point where he can’t get offended if she’s unhappy. He just had to validate her when she needs it and she in turn needs to understand how much his family means to him. And that yes that will always be his first priority.