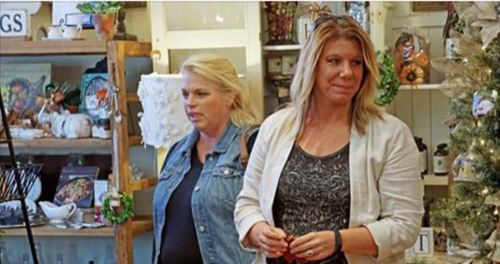 TLC’s reality show Sister Wives returns tonight with an all new Sunday May 29, season 6 episode 18 called “Unforgiven” and we have your weekly recap below. On tonight’s episode, Meri gets a present for Kody to make amends for the catfishing catastrophe.

On the last episode, Meri tried therapy with Janelle in an attempt to put the catfishing incident behind her, but Janelle worried that their session could open up old wounds.  Did you watch the last episode? If you missed it we have a full and detailed recap right here for you.

On tonight’s episode as per TLC’s synopsis, “Meri gets a present for Kody to make amends for the catfishing catastrophe. Meanwhile, Madison goes shopping for a wedding dress; and Mariah displays her independent side.”

Madison was planning her wedding on tonight’s episode of “Sister Wives” however she was very strict about what she wanted and who was allowed to give an opinion. So while Maddie wasn’t being a bridezilla, she definitely cut her father off from being a zilla of his own. Kody was someone that liked to take charge and party planning has always been his things.

But Madison wanted her wedding dress to be a surprise to both groom and father of the bride so right away she cut Kody off at the knees because he at least thought he was going to be helping his daughter pick her wedding dress.

Only, as it turns out, Madison wanted to pick a dress of her own with only a wedding party and her mothers there to help. Technically the mothers weren’t allowed to leave their chair in the salon because she didn’t want them all to be walking around. So the ladies also had to take a step back of their own and just have opinion on whatever dress that either Madison or the on-floor assistant chose. And eventually Madison got into a dress that everyone loved.

She chose a dress that apparently made her sparkle so the family told her to get that one. Yet, that was one of the few things that Madison’s parents chose. Madison had wanted an outdoor wedding do she picked that and she wanted the men at the wedding to appear almost casual.

The groom and his groomsmen were going to be wearing khakis and white dress shirts, but she told her dad that he could come in jeans and a nice jacket if he wanted to. So Madison had a clear idea about what she wanted her wedding to look like and the rest of the family were simply going to have to go along with it.

But during what was supposed to be such a great time for the family, Meri was still struggling with the decisions she made and how to tell everyone that she did want to stick around. Meri knew that she had hurt the family with her relationship with her online friends and so also knew that it being catfish by her supposed her friends hadn’t just affected her.

So that led to Meri wanting to do something for the whole family. She wanted to make amends as well as show them that she was still committed to their family.

So Meri began to take art classes and she also went through additionally lessons privately because she wanted to paint something for everyone. She wanted to paint the family symbol which was a true to show that there was still over twenty branches attached that symbolically stood for all of them.

Although as she was making the tree, Robyn began to experience some strong pre-labor contractions. Robyn had been three weeks away from her due date when began to experience them so she had to check herself out with her doctor to make sure that the baby was going to be safe even if it did come early.

And the doctor said that there was no problem if the baby came early, but she still had to check Robyn out. The contractions weren’t just strong, they literally had the powers to stop Robyn in her tracks. So the placement of the baby had to be confirmed and that revealed the baby was already in the right position. Head down and feet up for the most part which was a good thing if the baby did decide to come early.

However, when Meri went over to Robyn’s, she hadn’t been offering to take Soloman off of her sister wife’s hands as a way to relieve Robyn of some of her lead. Meri had actually made her offer because she wanted to use Solomon as a buffer between her and her daughter.

Solomon and Mariah have a great relationship so Mariah would have always been on her best if her little brother was around. And she would not have been as angry with her mother or as accusatory if Solomon was there.

Only Robyn didn’t think that Solomon was ready for an overnight trip even if it would be with Meri. Robyn had said that Solomon had been acting up lately what with waking up in the middle of the night and screaming because he had a nightmare. So Robyn had to say no to overnight trip.

Her son was ready for one without her and she knew it in her gut. But Meri had been truly hurt by that rejection and she kind of wanted to know if trust might have played a part in why Robyn had said no.

Meri later acknowledged that her own insecurities could have been what was messing with her head however Robyn and Kody both had to talk to her again so that she fully understood the situation. It wasn’t her, it was Solomon. Solomon couldn’t go a few hours without demanding his mom so it seems the little boy had become clingy as of late because he knew his mom was having another baby.

So Robyn and Kody had to work hard to get Meri to put her guard down and even then she still couldn’t make the trip by herself.

Meri had needed some time before she could calm down and look at things rationally. So one of the things that helped Meri face Mariah again was Breanna. Breanna who was Robyn’s biological daughter has a great relationship with Meri and therefore Breanna had no problem with taking a girls trip with Meri to Utah.

And it also didn’t hurt that Breanna had gone with Meri before to Utah so Breanna ended up being one of the best parts of the trip.

Mariah had still been upset with her mother because of the whole catfish thing and the younger woman claimed that she wasn’t ready to forgive her mom.

Mariah felt she needed time too to come to grips with Meri’s relationship with a person she thought was a man in love with her. So Mariah was still hung up on that and unfortunately the one daughter that had always seemed to be the firmest in her faith was now questioning the church itself.

Mariah wasn’t sure if she wanted to be a part of her family’s faith and part of that faith included the polygamous lifestyle. And so there was a chance that Mariah was pulling away from that as well when once she used to be the only one that said she wanted a sister wife of her own one day.

But one of the hardest things about Mariah’s new personality was her attitude. Mariah had taken being upset to mean that she could be openly rude to her mother. So Meri had to deal with a lot of comments that one point made Breanna speak up and say weren’t all that nice. And yet Meri tried to take it until Mariah had gone too far one time by making comment about her mother’s eyebrows.

Mariah had asked her mother why she had drawn her eyebrows so thin and technically that hadn’t been a real question. Meri were just doing what she was always doing while Mariah was calling attention to it because she wanted to embarrass her mother in front of everyone. Which included Meri’s family back in Utah. So Meri had then told Mariah that they were going to go for a walk.

Meri knew that she needed to talk to her daughter, but Meri hadn’t known that one of the problems with getting Mariah to understand her side was that Mariah had known what drove her mother to seeking online friends. Apparently Mariah knew better than anyone that her mother struggled with an empty nest and she had honestly begun to pull away from her mother before the catfish thing because she felt like her mom was smothering her in order to stop feeling lonely.

So Mariah knows that her mother was just looking for some comfort yet like her mom she didn’t know how to express what she was feeling.

Mariah had wanted to tell her mom that she ruined her trust and more than anything she felt like Meri had wanted to talk with her because she wanted sympathy from Mariah. So Mariah felt like her mother didn’t deserve sympathy seeing as she had begun an online friendship/relationship in spite of Mariah warning her not to. And Mariah didn’t see the catfish thing as something being done to just Kody or the sister wives, she saw it as an act against her for needing time away from her mom.

Yet, their discussion didn’t cover any of that. Meri had tried to talk to her daughter on their walk and Mariah had put up her walls. So Meri eventually had to drop it because Mariah had said she wasn’t ready to talk and she had shot down seeing Nancy for a joint therapy session.

And so Meri was left with one idea of what was going on because she thought that maybe Mariah had thought she was going to run away with gun she met online whereas Mariah was very angry for a different reason.

So Meri’s relationship with Mariah was still going to need some work, but the family was beginning to recover from last summer and with both a new baby as well as a wedding it did seem that things were finally looking up.