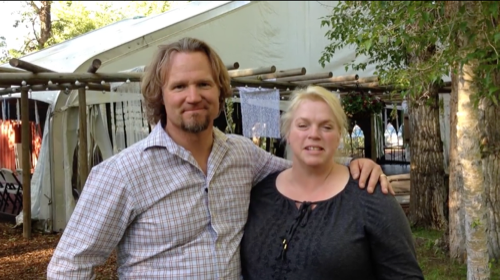 TLC’s reality show Sister Wives returns tonight with an all-new Sunday, June 5, season 6 episode 19 called “Baby Sister Is Born!” and we have your weekly recap below. On tonight’s episode, Robyn’s baby is due and she’s worried about having a breached birth, so she and Kody go for one more ultrasound.

On the last episode, Meri got a present for Kody to make amends for the catfishing catastrophe. Meanwhile, Madison went shopping for a wedding dress; and Mariah displayed her independent side. Did you watch the last episode? If you missed it we have a full and detailed recap right here for you.

On tonight’s episode as per TLC’s synopsis, “Robyn’s baby is due and she’s worried about having a breached birth, so she and Kody go for one more ultrasound; Madison goes to her wedding gown fitting.”

Robyn had been more spooked than ever with her latest pregnancy although there was nothing she could honestly point to as to why she was feeling the way she was.

However, Robyn it seems is a superstitious person and she said that she’s had weird feelings in the past that meant something was off. So when she began to feel “weird” during this last pregnancy with the new baby, she became concerned. She thought that her feelings were telling her something and that they were trying to tell her that there was something wrong but her midwife had later assured Robyn that everything was progressing as normal. And in fact, the only thing that could become worrisome – potentially – was the position of the baby.

The baby hadn’t been in the correct position during Robyn’s last checkup because its head was still up high and because of that there was a small chance that the baby could be born breached. Which also carried the risk of making a home birth also potentially difficult. Yet, the midwife had told both Robyn and Kody that she thought the baby would right herself when it came time for Robyn to give birth. So the only one that was truly worried about the position was Robyn whose mind couldn’t get over her feelings much less stray from the possible negatives.

Only talking about babies and giving birth had made everyone a little nostalgic. The adults had remembered when Logan was born into the family and they joked about how they had all spoiled him because he had been the first baby. And as they were talking, they also mentioned what happened to Madison when she was a little baby. Madison had apparently rejected most of Janelle’s milk during those first few months and wasn’t gaining that much weight. So Meri had to actually step in and breast feed her occasionally.

Although that wasn’t really the norm for their family and Meri even admitted that she had felt awkward doing it. Meri had said that breast feeding was an intimate thing between mother and baby so she had felt slightly guilty and unsure of herself even as she was helping Janelle. Janelle though had just been grateful. She knew that her milk wasn’t working out and was glad that Meri had stepped in to help. And in time, Madison did gain the necessary weight.

So it had all worked out for the best however, all the talking about babies and pregnancies had kind of made Meri emotionally. Meri had had only one child and that was her daughter Mariah. But when Mariah was twelve, she had a miscarriage and that had been the last time she had ever conceived naturally. And IVF hasn’t been mentioned in a long time.

Yet, Meri had seemed like she had accepted that but going down memory lane had just reminded her about everything that had happened and how much she missed out on. So the conversation did turn into something else. Like Madison’s wedding. Madison as it turns out had a wedding dress on her third try and so the wedding was quickly coming together. And, despite that, Janelle still didn’t get the theme.

The theme of the wedding was Bohemian and Janelle had laughed as she said she didn’t really know what that was. So the adults were still trying to figure out where Madison was going with her wedding and in the meantime the wedding couldn’t help make them think that everyone was quickly growing up. They had a child that was about to get married and several of the kids were finishing up with school so what Janelle’s mother had told her proved to be true – as fast as they come was going to be as fast as they left.

And yet there was another announcement in the making. Kody it seems had wanted to gather the family all around because he had something important to say, but his family hadn’t taken his latest announcement seriously. He tried to get their attention and they made jokes. Then he tried to tell them to listen up so that they could at least hear what he wanted to say and somehow he was still drowned out by everyone goofing around.

But when peace finally reigned, Kody was able to announce to everyone that they were going to take vacation during spring break to Hawaii.

The applause on the other hand, had needed some work. The younger kids had been excited when they heard about their trip to Hawaii though the older kids had seemed to be concerned with their food. The announcement had been made during breakfast so the older kids were eating while the younger kids were jumping up and down. Although it’s not exactly clear if Solomon understood what was going on before he began to celebrate it.

However, on the second hour of tonight’s “Sister Wives”, Robyn finally went into labor. Robyn it seems has been experiencing contractions for weeks before she actually went into labor so it had been something of a relief. Only the real thing turned out to be a long-drawn-out process. Robyn had had strong contractions from the start and yet she had been stuck for several hours in-between. So there had been a point where there was nothing that the midwife could do until Robyn began to dilate again.

And those several hours had put everyone on edge. Robyn had still had superstitions and for a second things had gotten so tense in her bedroom that her mother began to pray during the delivery. So this last pregnancy was very different compared to the one she had with Solomon and it had frightened some of the older kids had decided to take part on this one. Such as Breanna for instance.

Breanna and Aurora had been in the room with their parents in the lead up to the final moments and so Aurora who was older had even timed the contractions for the midwife. But Breanna had been worried. Breanna hadn’t said anything or did anything that drew attention however, there had been a look on her face that just showed pure fear. So it had been clear to anyone watching that she had been terrified of what was happening and the toll this last birth was taking on her mom was also affecting her.

Robyn though had refused to scream or cry out. She had been tired when it finally came time to push, but she hadn’t overall reacted and Kody said that he suspected she didn’t any of those things because her mom had told her that babies need a calm environment. And while he appreciated that advice, he thought that having to remain calm was putting additional pressure on Robyn.

So Kody had constantly been at Robyn’s side, reminding her to maintain her breathing and towards the end keeping her spirits up as well. The kids had left when it came time for Robyn to push so that hadn’t been there as everyone else grew concerned about how long it was taking to push. Yet, the baby had sort of been lodged in there so it had taken several pushes to get the head out and Robyn still had to push a few more times just to get the rest of the baby out.

Which Kody concluded was unusual for him. He said the babies usually slip right out once the head had been cleared. So everything about the birth of his eighteenth child had been intense and new for him though there had been a reason for why the baby had taken its time. The newest little Brown had been nine pounds and nine ounces. And she also had wide shoulders as well as a big head.

And therefore, the baby had technically been huge. However, the pushing had ended up taking its toll because the baby had broken its collar bone on the way out. So that merely meant everyone had to take extra precaution with her yet Logan had still been hesitant to hold his sister. Logan hadn’t wanted to hurt her and so it was apprehensive about holding her in case he did it wrong or his grasp wasn’t firm enough. Only she had been fine and he had nothing to worry about once he got over his fears.

Though with Logan in town, Janelle couldn’t help thinking that maybe it was time for him to get serious with his girlfriend Michelle. Michelle had come with him when he came home to see the baby so she was practically part of the family already. So Janelle’s thinking wasn’t that far-fetched and she knew for a fact that whatever school Logan went to, Michelle was going to go with him. And that two were most likely going to live together.

So Michelle’s future in the family seemed a done deal and later, as Kody struggled through making another announcement, the new baby’s name was finally revealed. Kody and Robyn decided to name their daughter Ariella Mae, but they’ve already figured that they’re going to call her Arya for short.