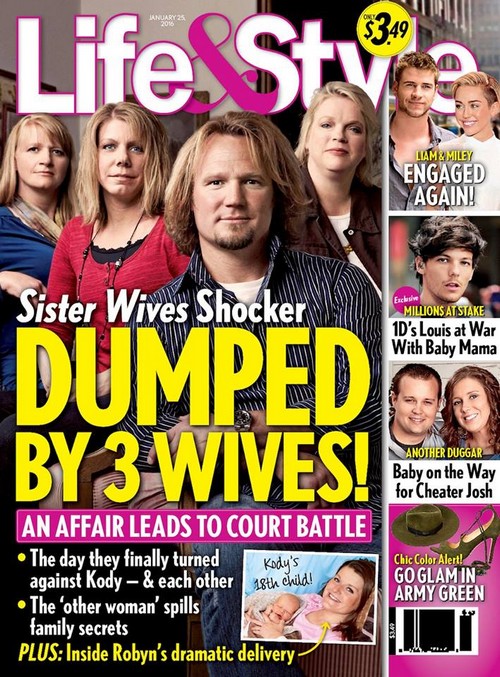 Sister Wives star, Kody Brown is looking at a scandalous shocker that could leave him dumped by 3 of his 4 wives. Could this be the end of the polygamous family? Will Sister Wives be canceled before the next season even airs?

Kody Brown’s fourth wife, Robyn Brown just gave birth to his 18th child on January 10. Yes, I said 18. That was not a typo. The baby girl was born at home in Las Vegas and weighed in a 9 lbs 9 oz. She is still nameless as of right now.

This is the 5th child for Robyn Brown who previously had 3 kids before her relationship began with Kody Brown, so this makes 2 with him.

There are new reports coming to light thanks to Life & Style that suggest a shocking affair that lands the twisted family in court, in what we can assume is a custody battle. There is some “other” woman involved that allegedly lets the cat out of the bag.

This is going to get really ugly before it gets better. With every man (woman) for themselves, it’s turning into an all out war.

In case you were not aware, the only legal marriage among Kody Brown and his four “wives” would be his marriage to Meri. The other 3 are only considered to be “spiritual marriages”. So when it comes down to legalities, does Cody Brown have a legal foot to stand on when it comes to custody of this kids with Jangle Brown, Christine Brown, and Robyn Brown? But…. then there is the divorce from Meri that happened so that he could adopt Robyn’s other 3 kids after legally marrying her.

So this is all kinds of wacky, twisted confusion. Will Kody Brown have parental rights if all his wives leave him? Sure, he could have visitation, but generally speaking, the mother wins in court the majority of the time unless she is deemed unfit.

This is going to be very interesting to watch unfold. What do you guys think? Who do you suppose the “other” woman is? Could this really end it all? Stay tuned of more confusing details!