BY Kristine Francis on June 14, 2016 | Comments: 2 comments
Related : Reality TV, Recap, So You Think You Can Dance, Television, TV 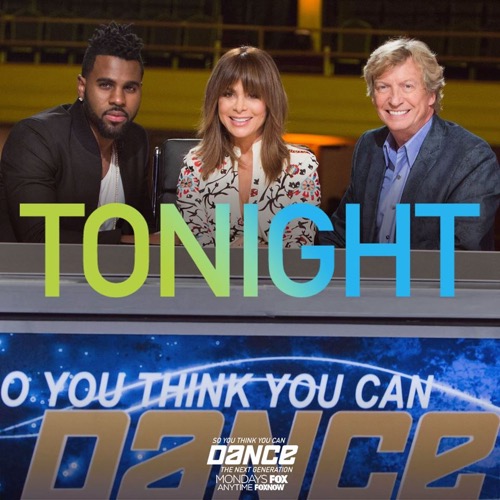 Tonight on FOX, SO YOU THINK YOU CAN DANCE continues with an all new Monday, June 13 season 13 episode 3 called “The Next Generation: Auditions #3,” and we’ve got your recap down below. On tonight’s episode, we see the third and final round of auditions.

On the last episode, Judges Nigel, Paula and Jason visited Chicago in their search for the best young dancers in the nation. Did you watch last week’s episode? If you missed it, we have a full and detailed recap right here for you.

On tonight’s show per the FOX synopsis “in the final set of auditions, judges Nigel, Paula and Jason must decide which young dancers will continue in the competition to become America’s Favorite Dancer. Find out who makes the cut to move on to the next round of the competition.”

The third episode of So You Think You Can Dance season 13 airs tonight at 8PM and you don’t want to miss it. Celeb Dirty Laundry will be live blogging the show, so don’t forget to come back to this spot at 8PM EST for our live recap!

The first act on tonight’s episode of “So You Think You Can Dance” was a hip hop duo that surprisingly beat out Cat Deeley at arm wrestling.

The two little boys were dressed to the nines in their suites, but they ended up living up to their Hip Hop genre. They went from popular dance to popular dance during their routine and the judges really loved them. And not just individually. Nigel Lythgoe had said that they complimented each other really well so he as well as both Paula Abdul and Jason Derulo felt it would be a crime to split up the group. So R.J. and Jake, who were eleven and twelve respectively, were the first to pass onto the next round.

However, the duo weren’t the last. A twelve-year-old from Miami, Florida had been dancing all of her life thanks to her coach and father so the young Latin ballroom champ had decided to dance a routine based on her skill. Only it was hard to see her skill without a partner so the judges ended up calling her father to the stage. The dad had been sitting off to the side and he had clearly known the choreography. So once Ruby got a chance to dance with her dad, that’s when she truly shined and therefore she was passed onto the next round.

And after Ruby there was a young woman that came from Canada of all places. Apparently the Canadian edition of the show haven’t gone Next Generation just yet so the twelve-year-old Tate decided to take her major ballerina skills to the states and there the young girl simply floored the judges. The judges had said her routine itself had been an emotional rollercoaster and Paula for one had been floored. Paula at first couldn’t find the words to describe what she was feeling, but she eventually settled on calling Tate a wonderful gift and the gift that was Tate was passed on to the next round.

Though afterwards, it was back to ballroom and new duo performed onstage. Alex who was eleven and his partner Valeryia who was ten had gone up on the stage and allegedly they had rivalled the best of Dancing With the Stars. The judges loved them and more importantly they felt that they were both great together as well as individually. So the one critique had been that harsh. Alex had unfortunately kept his mouth open throughout most of the dance so Nigel had to tell him to be careful about that in case he catches flies yet other than that the duo were loved so they went onto the next round.

Lucas however was probably the smoothest thirteen-year-old there. Lucas was a tap dancer and he decided to tap his way to James Brown “I Feel Good”. So Lucas definitely brought personality to the stage although the judges would have preferred it if his routine was just a little neater and he had kept more control on his facial expressions. Otherwise he could have been the best tap dancer that the judges ever saw up on that stage.

But Lucas was passed onto the next round and that’s because his technique saved the day. Only the following act didn’t necessarily work all that well together so their routine suffered because of it. Josh and Lisa were a ballroom duo and they seemed to be pretty good friends both on and off stage. So their act should have really been better that what it was yet Lisa who was admittedly only nine-years-old was simply not ready for the competition. She was good just not as good as say Josh or some of the other acts that the judges have seen. And therefore ended up going onto the next round without his partner.

And though it was sad to see that a duo was separated, the judges did say that Lisa could always try again next year so that must mean they saw potential. Yet, a certain breakdancer from New Jersey didn’t need another year to give the stage his all. Kai who had been performing with the Dynamic Rockers as their youngest member was used to performing and wowing the crowds. So the judges ended up asking him for a second part to his routine because they wanted to see him dance with some of his group members when really they simply wanted more of him.

So it wasn’t that surprising that Kai was moved onto the next round. However, Dougie who was eleven-years-old and who had actually styled his outfit after one of Michael Jackson’s most famous costumes was also someone that needed to work on his technique. He was a great performer and who couldn’t help smiling to see him dance, but the judges called into question his footwork which they felt was at times slightly amateurish during his routine. And therefore if it hadn’t been for Dougie’s personality then he wouldn’t be passing onto the next round.

Though the final dancer on tonight’s episode did return to the some of the great footwork that’s been seen on this season. Olivia who was twelve-years-old had told Cat beforehand that she wanted to look like a snake during her routine and funnily enough that’s exactly what she looked like. She was incredibly flexible as a ballerina and Nigel for one had been amazed by her sense of control. He said the choreographers were going to love her this season and so she was the last person to walk away with a ticket to the next round.