BY Kristine Francis on July 25, 2016 | Comments: one comment
Related : Reality TV, Recap, So You Think You Can Dance, Television, TV 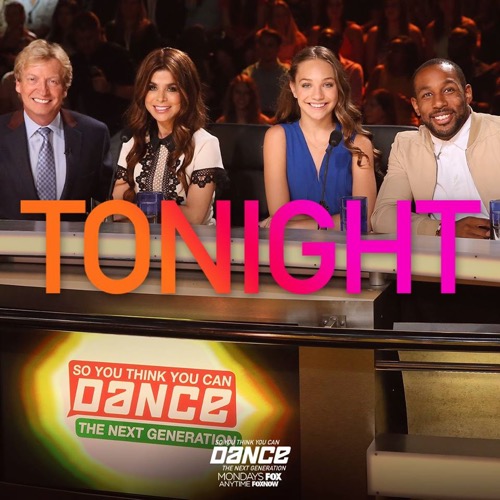 Tonight on FOX, SO YOU THINK YOU CAN DANCE continues with an all new Monday, July 25 season 13 episode 8 called “The Next Generation: Top 9 Perform + Elimination,” and we’ve got your So You Think You Can Dance recap down below. On tonight’s episode, the Top 9 dancers perform, and one of them is eliminated.

On the last episode, after the Top 10 danced their hearts out for the nation’s vote, one dancer had to say goodbye. Who stayed in the running to become America’s Favorite Dancer? Did you watch last week’s episode? If you missed it, we have a full and detailed So You Think You Can Dance recap right here for you.

On tonight’s show per the FOX synopsis “each dancer has another chance to wow the judges and win the hearts of the nation before one must say goodbye. Find out who will remain in the competition to become America’s Favorite Dancer.”

Jason was back on the judges panel on tonight’s episode of “So You Think You Can Dance: Next Generation”.

Jason apparently had a work commitment last week so that explains his absence, but it was good that he was back for the Final Nine. The Final Nine was an uneven number and so this week the contestants were back with their all-star mentors. Who they knew for a fact wouldn’t take it easy on them. Yet, tonight’s episode was more than just dancing well with their mentors because not everyone made a great impression last week. They were some that floundered outside of their genre and with a new partner so they had to prove tonight that they were still worth keep around.

So first up was Jake and his all-star mentor Jenna. Together the two danced a carnival style ballroom and Jake who was a clear favorite had proved once again that he could put a smile on the sternest face. Jake could dance however what his most known for is probably his personality. He is an outrageous flirt and will literally with whatever partner he’s given. But he’s also an entertainer so that what he consistently brings to the stage and the audience always love it. Even tonight because they just loved seeing Jake swing his little hips in tune with the beat and his partner.

Tate who had been next after Jake was also showing the why they loved her so much. Tate had danced with her all-star mentor Kathryn in a ballet piece about holding on and letting go. So it was supposed to bring out an emotional response and that’s exactly what they did because all the judges could say was how beautiful it was. And also how her technique was once again on point because last week she did have some technical issues when she tried her hand at Hip Hop however, not everyone got the full redemption they were looking for tonight.

Kida and his all-star mentor Fik-Shun had gone on after Tate and they had danced a Hip Hop piece that told a story about Pinocchio. Kida had been the puppet come to life and Fik-Shun had been the puppet master. However, the judges were split on whether they enjoyed the dance or not. Paula, Maddie, and even Nigel had said that they enjoyed the performance and liked it yet Jason had been the only one that found something to complain about. Jason had said that the duo had a leveling problem because there would be times when Kida would be smiling and then drops that smile only no one else had a problem with that because they said he was playing a puppet and being wooden was in character.

Only Jason wasn’t done there. Jason also found a problem with Jordan’s dance with her all-star mentor Sasha. The ladies had done a new take on the jazz age so their performance had been lively and even sparkly what with their new shoes seemingly becoming part of the act. But, Jason had thought that their dance was out of sync during certain parts and that time he hadn’t been alone. Nigel had finally seen what he was talking about with Jordan and Sasha so he too called it sloppy at certain intervals though he did say it was otherwise enjoyable.

Sheaden and his all-star mentor Marko on the other hand, got much better review from the judges. Sheaden had been in the bottom two for the last two weeks so tonight he gave his performance his all and being with his mentor again certainly seemed to help him rebuild his confidence. Tonight he was entertaining and some also added charismatic during his performance. So he ended up receiving a rare standing ovation because everyone stood up for Sheaden. Most especially the judges who called his Hip Hop number with Marko his best performance yet.

So Sheaden had definitely redeemed himself with his performance and he was kinda a hard act to follow. Yet, Ruby and her all-star mentor Paul had done their best. Ruby and Paul had danced a tango number so there were plenty of lifts and sweeping across the floor, though while the tango is usually seen as a dark romance, Ruby’s choreographers had kept it PG by letting the performance be about a brother passing down the traditions to his sister. And so that allowed the duo to show off the dance in a new light.

The dance was sweet instead of sultry and it also put a nice smile on everyone’s face. Including Nigel who had compared it to a nice walk on a spring day. So it had also come as surprise when Ruby admitted that she kept kicking Paul during practice. It was apparently something that Paul can laugh about now, but the good thing is that she hadn’t kicked at all during the actual performance. Though if you think Jason wouldn’t find an opportunity to put his foot in his mouth again, you would be wrong.

Jason who did have West Indie roots had thought that Tahani and her all-star mentor Comfort’s dancehall number had been done to the song Sean Paul and not by the artist Sean Paul. So while everyone had enjoyed seeing Dancehall for the first time on the stage and had complimented the dio, many at home and those whose mother was possibly Jamaican couldn’t help ganging up on Jason for his mistake. How could you not know who Sean Paul was? Then to have Jason put on an accent because he had suddenly been proud of Tahani and Comfort’s dance that he felt was a tribute to his heritage – well that left some saying too little too late Jason.

But the dance had been great and it also opened up the stage to a new dance they so rarely see be portrayed on TV so that had been a great thing and who knows it could have been a top contender for tonight if J. T. and his all-star mentor Robert hadn’t once again gotten up on that stage and put everything else to shame.

J.T. had suffered last week with his new partner and for some reason he couldn’t make the transition from being cute to simply being entertaining. Yet, J.T. was always his strongest in those pieces that were quite emotional and was just breathtaking beautiful. So that’s what Travis gave him and Robert. Travis had come up with a moving piece about a young man struggling to identity until he looks into the mirror and sees his younger self so Robert and J.T. were playing mirrored versions of the same person. And not only did Travis bring out the best in J.T., but it was almost like what earlier performance because no one could remember last week J.T.

So it was good that J.T was able to show that he hadn’t lost his touch and more than one judge had felt like Travis could even receive another Emmy nomination for that dance. However, it should be noted that despite everything J.T. hasn’t always been consistent. He’s been enjoyable just not consistently dancing at his best as many of us saw last week when he had been paired with Emma. Emma though had danced a tap number tonight with her all-star mentor Gaby and she had also done much better.

The judges had loved Emma with Gaby and so that had proved that Gaby and JT simply can’t pull off a performance. Although, that might end up working against them again if they were paired up at another point in this competition. So now we know their weaknesses and that might affect how America votes next week. This week though the viewers had decided on sending Sheaden and Ruby into the bottom two. And after much deliberation, the judges ultimately decided that it would be Sheaden that was eliminated on tonight’s episode of “So You Think You Can Dance: Next Generation”.

Sheaden had a great night tonight yet sadly he had gone as far as he could in this competition.