BY Stormy Elizabeth on May 10, 2016 | Comments: one comment
Related : Recap, Television, TV 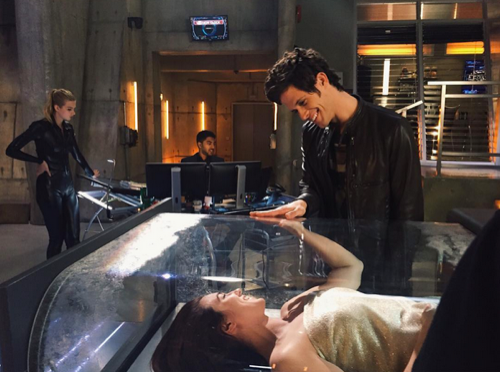 Stitchers continues on Freeform tonight with with an all new Tuesday May 10, Season 2 episode 8 called “Red Eye” and we have your weekly recap below. On tonight’s episode, Kirsten (Emma Ishta) stitches into multiple victims of a plane crash to determine whether it was caused by terrorists or a fellow passenger.

On the last episode a young lawyer from an elite firm was found dead in her office, leading the team to interview her suspicious coworkers on a hunch that her death could be related to a high-profile case; and Maggie ran into an old boyfriend at the law firm.

On tonight’s episode as per the Freeform synopsis, “Kirsten stitches into multiple victims of a plane crash to determine whether it was caused by terrorists or a fellow passenger. Meanwhile, Cameron worries about Kirsten in light of his new relationship with Nina; Camille helps Linus with a personal issue; and Liam continues to cause problems.”

#Stitchers starts at 8:14 am with Kirsten calling her sister Ivy Brown. She tells her their relationship. Ivy says she knows who she is then says don’t call me and hangs up. Kirsten calls anyway but she doesn’t answer.

On a flight, a flight attendant named DeeDee collapses then people start freaking out. Passengers are seizing and dying all around. At 9:02, Cameron is in bed with Nina but he says he has to go to work. She says his video game job is not life or death and complains.

Cameron says he can’t go in late. Nina thinks he doesn’t have time for a relationship but he asks to talk about it later. Maggie tells the team about the 12 dead passengers on the flight. Blair wants the team to look at the bodies.

Maggie says they’re strangers in different parts of the plane and no chemical traces found. Camille says they can’t stitch into a dozen and Maggie says six. Cameron says Kirsten can’t handle that but she says they have to try.

Maggie says they pull the plug at the first sign of trouble. Kirsten asks Camille when she can hand Liam off to her. Camille asks if she’s sure about this and reminds her he was playing her and has a connection to Stringer but she says she can handle it.

Fisher is there and wonders if they can do it. Cameron says if they pick the right six, they may get a good perspective. They stitch Kirsten into the first one. Cameron says – may the odds be ever in our favor – and puts her in.

She’s at seat 12D and mentions DeeDee a flight attendant. DeeDee is one of the victims. A woman in 12C isn’t moving but then Kirsten says she’s still alive. There’s a guy in the overhead compartment looking for something.

The flight attendant talked to him and there’s a woman in 10D working on a laptop and closed it so someone else couldn’t see it. The lights flicker and she hears the descent announcement then bounces. She says the victim just died like a light switch going off.

Kirsten asks how long til she can stitch again. Linus is trying to get hold of his dad’s doctor with no luck and curses and throws some stuff off his desk. They are going to do flight attendant DeeDee next. Kirsten says she misses hanging out with Cameron and he says they can hang with Nina soon.

At 2:42 pm she goes back in the tank. Kirsten says Howard Tuckman put his jacket on his wife and laptop lady is doing high level match. Then 7C has a smart watch and the other flight attendant tells her a guy can’t find his passport. DeeDee also dies suddenly.

She says the lights flickered and the PA system got fuzzy. Linus goes to check it out and Cameron cracks an Airplane the Movie joke. At 4:37 pm, Camille and Linus look for electrical issues on the plane. He says his dad’s doctor is frustrating him and his parents are both afraid.

Camille asks if she can help. Linus sees that Liam is calling and goes off. She tells him Liam is connected to Stinger and she was working him on Maggie’s instruction. Linus says he believes her.

Cameron gets a text from Nina and smiles and he and Kirsten chat. He’s worried because she has a headache but she takes aspirin and says it’s fine. They move onto stitch three. Linus says they didn’t find anything.

Maggie gets another call from Blair and then Camille takes a call from Liam. She says Kirsten is not over him and seeing them together made her miss him. Camille says she can’t get in the way just in case there’s a chance for them.

Liam admits he’s intrigued and she says she’ll have Kirsten reach out to him. He says she’s a good friend. He’s in Kirsten’s house and snaps photos of her chart that shows she knows he’s working with Stinger. Uh-oh.

Kirsten goes into the next guy and says Kevin is next to laptop lady and she gets a look at the screen then he dies too. She says he died at the same time. She says the laptop screen was quantum computing. IT’s Tracy Green in 10D.

Fisher and Linus sit down with Tracy and they ask why she was in LA and she says she works for a company that designs quantum computers. Linus says he gets it and she says it crapped out right before they landed and it’s toast.

Linus looks it over and Fisher thanks her. Linus asks how much a quantum computer would cost and she says if you have to ask, you can’t afford it. They don’t think she’s the killer either and Linus questions her expertise.

Camille isn’t finding a pattern. Cameron sends Kirsten to rest while they sift through evidence. He makes her go sit. She puts her head down to nap. Camille says all the victims were traveling on past LA and that means they all had passports.

Kirsten answers Cameron’s phone and it’s Nina. She’s stunned and asks for him and we see that Kirsten’s nose is bleeding. She says he’s busy right now and it’s been a crazy day. She cleans up before anyone can see her bleeding.

Nina blows out the candles and walks angrily out of Cameron’s place. Linus video chats his dad and asks how he’s doing. His father says his test results came back and they’re not good. He says the doctor called him and said he left him 12 messages.

His father tells him not to worry about him and focus on work. Linus says he can beat this. At 11:42 pm, Camille goes to Linus and asks him out but he says his dad is worse than he thought. He says he needs more time and has to do his job.

He says he can’t cure his dad but he can solve this problem and goes back to work. She touches his hand then walks away. Kirsten goes back in and is in the guy Matt who lost his passport. Ayo warns that her BP is dropping. Matt is told to sit down when he can’t find his passport.

But then he found it on the floor. The lights flicker and Kirsten bounces. She says his passport was in the pocket next to his heart when he died.

The team looks through the passports for a clue. Camille cuts into one and reveals the RFID chip inside it. They are in all passports but Linus says RFID chips only store information. Camille wonders. Kirsten gets ready to stitch again.

Cameron asks Ayo if she’s okay. She says the headache is gone and she gave her a B12 shot and some glucose but she can’t know if she’s okay. Cameron suggests going for a hot swap to take her through the last two samples one after another.

Next is Ramon and Cameron says we’re going to do a two minute stitch and then go live into the next one with one minute of stasis in between. Kirsten goes into the first one and sees the guy with the watch then Ramon goes past a guy writing a letter – it’s the nervous guy.

They pull her offline and into stasis which is weird. She says hurry and looks around with some anxiety. Young Cameron is there with her and she asks who he is. He says she looks tired and scared and says he’ll stay with her.

The team works to bring in the next stitch. He says she needs to see all of the victim’s memories at the same time. He says he’ll show her then she’s very young and there are flowers on her head. He says he got it from her memory.

Cameron moves Kirsten over into the last stitch. She looks around and says there’s nothing there to see. Linus says he didn’t map the memory properly and she bounces. Linus says he’s sorry and Cameron is frustrated.

Kirsten says one thing we haven’t tried but then she slumps down under the water. Ayo and Cameron run to drag her out of the water. Kirsten comes to and wants to keep going. Kirsten says let’s stitch all five at once. She says that will give her all perspectives at once.

Kirsten says daisy chain the subjects and connect four to the subject in the case. Linus says it could work and Maggie wonders if it’s safe. Cameron says they are on the edge of the map. Kirsten says 12 people are dead and the killer is about to get away.

They start daisy chaining the bodies. Camille runs in with CalTech equipment she stole to help. At 5:37 am, Cameron tells Kirsten to bounce if it gets hairy. She stitches in. The guy with the passport has a different name.

We see him talking to a man about getting paid. He tells him to keep the passport right there. He swapped identities with him. The other guy, Jay, set a timer for 45 seconds. Then the laptop flickered and the lights went out. Kirsten bounces.

She says Vincent was actually Jay and was paid to go to prison for someone else. Jay was the real target and the others were collateral damage. Kirsten recalls a symbol on the watch earlier and sketches it out. It’s from the Tokyo Metro system.

They check flights to Japan looking for the killer Vincent. Fisher approaches him and tells Kirsten to hang back. Then Kirsten sees the quantum computer chick. The guy says he’ll kill everyone with an RFID card near him.

Kirsten bashes him in the head with the laptop while he’s distracted by Fisher. She hands it back in pieces and says thanks. Cameron comes home and finds dinner remnants and texts an apology to Nina. She says no thanks.

His phone rings and it’s Kirsten. She says Nina called yesterday. She says she’s exhausted and then goes into her room at home.