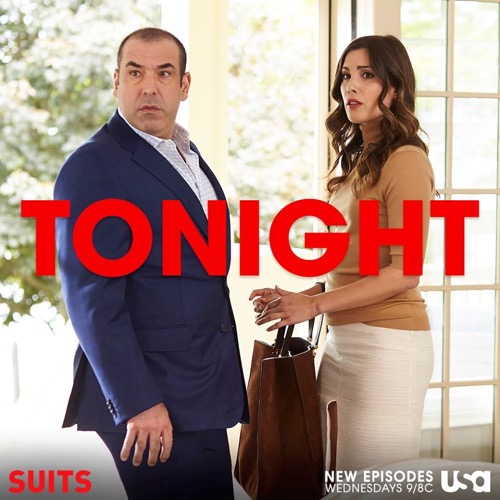 SUITS returns to the USA network tonight with an all new Wednesday, August 17, season 6 episode 6 called, “Spain,” and we’ve got your Suits recap down below! On this evening’s episode, Harvey (Gabriel Macht) defends Sutter from Cahill; Mike’s (Patrick J. Adams) past threatens to derail his mission.

On the last episode Mike tried to gain Kevin’s trust while Harvey enacted a risky plan; Jessica mended the firm’s reputation. Did you watch the last episode? We’ve got your detailed Suits recap right here.

On tonight’s episode per the USA synopsis, “Harvey defends Sutter from Cahill; Mike’s past threatens to derail his mission; Rachel and Jessica search for evidence to re-open Bailey’s case; and Louis woos Tara with a trip to the Hamptons.”

HERE IS THE RECAP!

Spain opens with Gabriel paying Mike a visit. Sitting at a jail table, Gabriel tells Mike he is working on getting him out.

Gabriel breaks the news that Kevin killed Rachel. Mike is dumbfounded and in shock. His emotions wake him from his nightmare.

Yes, the whole thing was a bad dream.

In the real world, Gabriel is dodging the senator so that he will sweat. Then he’ll talk to his lawyer, Gabriel tells Donna.

Kevin is going to testify that the software is junk. Meanwhile, Gabriel wants to know what Mike’s cellmate did.

Kevin questions Mike about his dream. Mike wants to know if Kevin feels bad about almost killing someone.

Louis’ house in the Hamptons will be a reality now that they have accepted his offer. Louis’ next step is picking the right wood for the house. Tara needs to love his wood!

All of this talk about wood has Donna laughing on the inside before she runs from Louis’ office.

William admits to Gabriel – in a round about way – that he is guilty of insider trading. Gabriel calls it fraud while William refers to it all as his talent – his job.

Jessica meets William for lunch. She wants his business and all of it. She threatens to drop him as a client. She’s blackmailing him into doing what she wants. It looks like he has no choice.

Back at the prison, Mike inquires about therapy. Now that he knows Kevin killed someone drunk driving, he needs to get tips on how to act around him. The fact that his parents died the same way is affecting his behavior towards Kevin.

Louis is going all out on his Hamptons house.

In court, Gabriel wins one over on Cahill after he points out one of his past cases where he caused sunk a poor business owner.

Gabriel tells William how he established a pattern of Cahill fishing.

William wants the whole case to be dismissed against Gabriel’s advice.

Angry, Gabriel goes to Jessica. He points out that if the case gets dismissed, Mike has no chance to get out.

Jessica doesn’t care what Gabriel thinks. She tells him to figure a way out of his mess.

Desperate, Gabriel drops by Sean’s house. He has the evidence Sean needs in a bag of fast food that he plans to leave on the sidewalk.  Sean walks away. He wants nothing to do with Gabriel’s desire to collude in an effort to help Mike.

Donna tells Louis of her plan to restage the house.

Rachel pays Bailey a visit in jail and tells him that she is taking his case. First, she needs to get the case reopened. Rachel needs to find Bailey’s alibi witness, Maria Gomez.

Jamal talks about his childhood, telling Mike that his dad had a double life as a criminal. He almost ruined his life because of adolescent rebellion, but a social worker helped him straighten it all out. He wants to do the same for Mike.

Gabriel admits to Donna that he left evidence in Sean’s reach.

Rachel visits Bailey’s old lawyer on the case, questioning her past strategy  on the case.

Rachel learns that Gomez and Bailey were both on meth back then, making Gomez an unreliable witness.

Gabriel returns back to the jail to give Mike a heads up about a practice deposition with Kevin the next day. Mike doesn’t want to be in the same room as Kevin, telling Gabriel it’s a bad idea.

Gabriel tells Mike about his plan – if Mike is in the room he can work to set Kevin off, lighting a fire under him, moving him to admission.  Mike agrees to the plan.

Rachel goes back to see Bailey, accusing him about lying about his mental state the night of the murders.

Bailey tells her he has nothing to hide. He doesn’t find the fact that he was on meth relevant.

When she pushes him, Bailey tells her that he is ashamed about his past, but he isn’t a killer.

At the practice depo, Mike goes at William and Kevin, getting them to fight one another.

Kevin wants out of the room, telling William that he is done with him.

Mike follows Kevin out, questioning Kevin about the truth. About why Kevin is in jail when he had no priors.

Kevin admits to Mike that William was committing insider trading and that his wife was in on all of it. Kevin chose to save his wife, taking the hit to save the mother of his kids.

Tara goes crazy over the house until the homeowners show up.

Tara thinks Louis is trying to get free design work from her. He comes clean, admitting that he was just trying to spend time with her.

She is blown away. The two decide that they are going to have dinner together!

Rachel demands an hour of Jessica’s time. Bailey’s execution date has been set and Rachel doesn’t want to tell him.

Kevin tells Mike that he is a sucker for falling for Williams’ charms. Mike tells him that he needs to try and get his wife immunity and rat William out for a deal.

Kevin isn’t having it. He swears Mike to secrecy.

We learn why Sean is so determined to take William down. William was indirectly responsible for ruining Sean’s mother’s golden years, her wish to visit Spain in her retirement. Instead she worked up until her death.

All of this has changed Sean’s mind, now he is looking for the software.