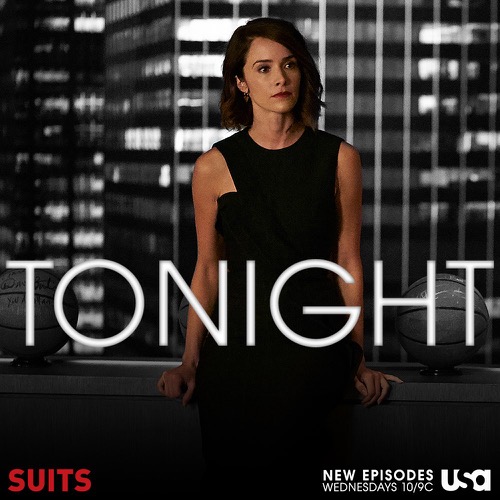 SUITS returns to the USA network tonight with an all new Wednesday February 10, season 5 episode 13 called, “God’s Green Earth,” and we’ve got your recap down below! On this evening’s episode, Harvey (Gabriel Macht) and Mike (Patrick J. Adams) lock horns over trial strategy and how to defeat Gibbs. ( Leslie Hope)

On the last episode Harvey (Gabriel Macht) was back on his home court, with Donna (Sarah Rafferty) back by his side, but there’s no time to get comfortable as Anita Gibbs’ (guest star Leslie Hope) next move hit both of them where it hurts.  Did you watch the last episode? If you missed it we have a full and detailed recap, right here for you.

On tonight’s episode per the USA synopsis “with time running out before Mike’s (Patrick J. Adams) case goes to trial, Harvey (Gabriel Macht) and Mike are at odds over their strategy, and just what lengths they’ll go to in order to defeat Gibbs (guest star Leslie Hope).

Meanwhile, Gibbs takes a shot at Mike’s Achilles heel when she puts the squeeze on Rachel (Meghan Markle). And when word the scandal starts affecting the firm’s standing, Jessica (Gina Torres) needs help from Louis (Louis Litt) and Jack Soloff (guest star, John Pyper-Ferguson) to show the world that Pearson Specter Litt is as strong as always.”

Tonight’s episode of Suits kicks off with Mike and Harvey in court – the judge orders Anita Gibbs to hand over the discovery to their case, which is exactly what Harvey wanted…he needs to know what they are up against. But, there’s a down side – the judge sets the trial date for just two weeks away.

Jack shows up in Jessica’s office, he says there is a problem. A recent headline in the newspaper reads that there is “No way in God’s green Earth” that none of the partners at the firm knew Mike’s secret. Jack says they need a plan ASAP. They need to do some pro-bono cases to restore their reputation, and get on their clients’ good sides again.

After court, Mike is paranoid – he thinks that Gibbs is going to come after more of their loved ones, like Rachel (just like she did Donna). Mike wants to hire someone to dig up dirt on Gibbs. Harvey tells him that is a horrible idea and if they get caught they will be in even more trouble. He tells Mike he will take care of it, and orders Mike to go back to the office and start going through boxes – they are going to trial in two weeks.

Louis and Jessica get a stack of applicants from Harvard – Louis rants that Sheila is sending them the “bottom of the barrel.” Jessica says that it is time to start considering hiring people from other universities like Yale or Stamford. Louis scoffs that is a horrible idea – they only hire people from Harvard.

Meanwhile, Gibbs is trying to sink her claws in to Rachel. She meets up with her at a café and tells Rachel that she has a deal for her. She tells Rachel that if she gives up the people that are really responsible for this mess (Harvey and Jessica), then she will make sure that Mike and Rachel can practice law for the rest of their lives and will get out of this unscathed – and she’ll even get Mike in to Columbia law school so he can get a real degree.

Rachel shows up at the office and Mike demands to know where she has been – she is supposed to be helping him get ready for the case. Rachel confesses that she met with Gibbs and she offered her a deal. Michael reminds Rachel that Gibbs is basically the devil and was just trying to get inside her head. And it worked, Rachel breaks down and cries because Gibbs reminded her that if she pleads the fifth in court – she won’t be eligible to take the bar.

Louis heads to Harvard – he demands to know why Sheila is sending them bottom of the barrel candidates. Sheila points out that she is not sending them “sludge,” no one wants to work at their firm because they read the article in the paper and know that Louis and his partners are being taken to court by the State’s Attorney. It’s career suicide for Harvard students.

Jessica decides that Jack’s plan was horrible – doing pro bono cases would mean that they are weak, and the other firms will be out for blood. She wants to remind the other firms not to mess with her, she sends Jack out on a mission to start poaching clients from their rival firms, which is pretty hard seeing as how nobody wants to sign with them while they are being investigated by the State’s Attorney.

Mike goes behind Harvey’s back and pays Scotty a visit – she isn’t too thrilled to see him. He needs another lawyer to go after Gibbs, Scotty doesn’t want anything to do with their mess. Mike tries to guilt her in to helping him and asks her to “do it for Harvey.”

Harvey bumps in to Gibbs and reveals that he is going let the judge know that she tried to me with a witness in secret, he accuses her of tampering with Rachel. Gibbs scoffs “why on God’s Green Earth” would she do that and Harvey realizes that she is the one that planted the article in the newspaper that is doing some serious damage to the firm.

Rachel is called in to the Dean’s office at Stamford. The Dean has learned that Mike is now being accused of taking L-Sats for other students, and he suspects that he may have taken Rachel’s test for her because there are some discrepancies in her scores. The Dean warns Rachel that if Mike’s case doesn’t go away soon – then he will have to expel her, he doesn’t want Rachel to make the university look bad.

Scotty shows up at Harvey’s office in a huff – she accuses him of sending Mike to her office to try and guilt her. They wind up having another one of their huge blow-ups over Mike’s secret. Scotty sneers that Harvey “chose Mike over her” before she storms out.

Mike heads home and Rachel is freaking out – she tells Mike that Gibbs got to the Dean at Stamford, and threatened to expel her. Rachel warns him that they know about him taking the L-Sats for people. Mike has an epiphany and he rushes to find Harvey. He tells Harvey that they have to go after Gibbs for “Abuse of Power” for trying to get Rachel expelled. Harvey says that they need proof that Gibbs contacted the Dean, he tells Mike to “do what he needs to do” – but don’t get caught.

The next day Harvey and Mike pay Gibbs a visit with the proof they got from David – Gibbs agrees to sign a document saying she committed a sanctionable offense and agrees to leave Rachel alone – in exchange they drop the charges of malicious prosecution that they were trying to press against her. It looks like Mike and Harvey have won this tiny battle – but it is far from over, and Mike is still in serious trouble.

Mike heads back to the office and tells Rachel the good news – she is off the hook, for now. Meanwhile in Louis’s office, he is having a meltdown because none of the other colleges have any students that want to apply at their firm. Louis freaks out on Jessica and blames her for their ship sinking. Jessica snaps at Louis that if he really was that worried about saving the ship – then he would go to Harvard and make sure that Sheila doesn’t make it to the trial.

Scotty stops by Harvey’s office – apparently he summoned her there. Harvey tells Scotty that their relationship didn’t end because of Mike, he wants to be upfront with Scotty and tells her that he has been “seeing someone.” When this whole thing is over – he hopes that he and Scotty can be friends though, and he wants to be able to call her.

Scotty bumps in to Rachel when she is leaving, and she gets inside of Rachel’s head. She warns Rachel that if Mike doesn’t go to jail, then he is just going to resent her for the rest of her life because she is going to get to be a lawyer and he can’t be.

Louis heads back to Boston and convinces Sheila to take a trip to Argentina so that she can’t be subpoenaed to testify against them in trial. Back at the firm – Harvey and Mike are at the office late and bickering over the case. Donna interrupts and tells them that they have a bigger problem – Gibbs has found Trevor.