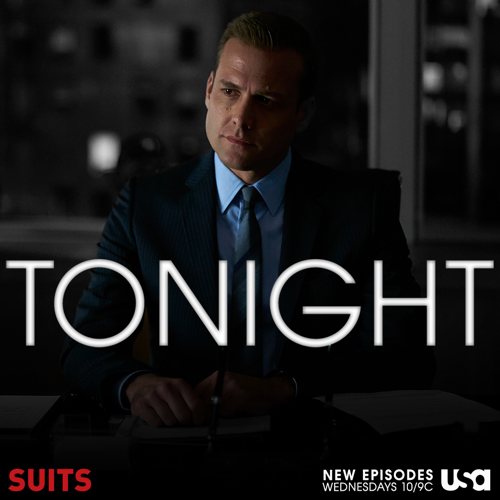 SUITS returns to the USA network tonight with an all new Wednesday February 3, season 5 episode 12 called, “Live to Fight….” and we have your recap below. On this evening’s episode, Mike (Patrick J. Adams) and Louis (Rick Hoffman) need to ID an anonymous tipster in order to diffuse a damning piece of evidence; and Gibbs sets her sights on Jessica (Gina Torres) and Harvey (Gabriel Macht) as well as Mike.

On the last episode as we began our mid-season premiere, Mike’s (Patrick J. Adams) worst fears had come true. He’d been arrested for fraud and was under investigation by a ruthless government prosecutor, Assistant US Attorney Anita Gibbs (guest star Leslie Hope).

Meanwhile, Jessica (Gina Torres) and Harvey (Gabriel Macht) had to figure out how to build a defense for Mike, knowing full well that he’s guilty of the crime for which he stands accused. And Rachel (Meghan Markle) had to come to terms with her family’s reaction to the news that her fiancé was not the person he claimed to be – and that he could soon be in prison. Did you watch the last episode? If you missed it we have a full and detailed recap, right here for you.

On tonight’s episode per the USA synopsis “Harvey (Gabriel Macht) is back on his home court, with Donna (Sarah Rafferty) back by his side, but there’s no time to get comfortable as Anita Gibbs’ (guest star Leslie Hope) next move hits both of them where it hurts. Meanwhile, it’s revealed that the Justice Department’s investigation into Mike (Patrick J. Adams) was kicked off by an anonymous tip.

Mike and Louis (Rick Hoffman) must identify the tipster before Gibbs can, in order to diffuse this damning piece of evidence. And Jessica (Gina Torres) confronts the fact that Gibbs isn’t only interested in Mike Ross – she’s set her sights on Harvey and Jessica as well.”

Tonight’s episode looks like it is going to be great and you won’t want to miss it, so be sure to tune in for our live coverage of USA Network’s “Suits” at 10:00 PM EST! While you wait for our recap hit the comments and let us know how excited you are for another episode of Suits tonight. In the meantime, check out a sneak peek video of tonight’s episode below.

Tonight’s episode of Suits kicks off with a flashback to when Donna was a young girl – her father informs her that they are relocating to Connecticut, and he has found them an apartment in Hartford. He tries to convince her that the movie is for the best, but Donna isn’t buying it. Her dad confesses that his business fell through and he has to move the family to Hartford for work.

Donna is sitting in the interrogation room with Gibbs – she informs Gibbs that she doesn’t know anything, and she has nothing to tell her. Gibbs smirks and says that Donna is free to go, as Donna is leaving – she looks at the interrogation room next to her’s, and her father is in there pacing back and forth. Donna demands Gibbs tell her what is going on – her father has nothing to do with Mike or Harvey. Gibbs laughs that Dona’s dad got involved in a “shady real estate deal a few years ago.” Donna hisses at Gibbs that she is a “cold heartless bitch.”

Earlier that day, Mike is lying in bed and trying to map out a game plan. He can’t concentrate because he knows that Rachel’s Dad told her to “get rid of him.” Mike tells Rachel that he trusts her and he believes that she isn’t going to leave him.

At the firm, Jessica is freaking out – she just got subpoenas from the state’s attorney office and they are subpoenaing every single case that Mike has ever touched. Jessica is panicking – she says she will be damned if she lets Jessica rifle through her house. Jessica wants Harvey to bring in outside council and ask Scottie for help.

Mike has a game plan, he and Harvey are headed to court to argue that the subpoenas are no good, they argue that she has no evidence. Gibbs pulls out a letter she received from a general faculty address at Harvard stating that Mike is a fraud. The judge tells Gibbs to track down the sender ASAP, or else she is squashing the whole case.

Mike and Harvey leave – Mike is certain that it was Gerard who sent in the anonymous tip. Mike wants to go confront Gerard, and keep him quiet, but then he would be leading Gibbs straight to the tipster. Harvey says that he has a plan, he knows someone that they can send to talk to Gerard that Gibbs won’t know to follow.

Harvey and Mike leave the judges’ office and learn that Donna has been taken in by Gibbs for questioning. Harvey tells Mike to deal with the email, and rushes off to help Donna. Mike takes the anonymous email to Louis and explains that he thinks that it was Gerard and they want him to go to Gerard and keep him quiet. Louis reads the email and is shocked – he recognizes the wording and tells Mike it wasn’t from Gerard, but he knows who it is from.

Flashback – Donna’s Dad really was caught up in a shady real estate deal. Apparently, he came to Donna and asked her to see if Harvey would let him borrow money to make the investment.

Donna and Harvey get in to see her Dad in the interrogation room, her dad reassures them that “no one can rattle his cage.” He insists that he isn’t going to talk to them. Harvey is livid – he confronts Gibbs and tells her that bringing Donna’s father in to the mix is a low blow. Back at the firm, Mike learns what happened with Donna’s dad and he feels horrible, he tells Rachel that he wants to cut a deal with the attorney before she drags anyone else in to it. Jessica gets wind of Mike’s plan and accuses him of turning his back on her and Harvey – Jessica isn’t stressed though, she has already hired her own personal lawyer in case that happened … Jeff Malone.

Louis is furious, he shows up at his ex Sheila’s house – apparently she just happened to notice that there weren’t any records of Mike Ross at Harvard, where she works. Then, she took it upon herself to email the tip in to the state’s attorney. Louis shouts that Sheila is messing with her entire firm. He demands that she retract the email, she laughs that she cant do that. Sheila gives Louis a speech about how they are clearly “not soulmates” because no man that she loved would protect a liar and condone what Mike did.

Louis heads back to the firm, and he is having a meltdown. He tells Mike that Sheila wrote the note, and there is no way that she is going to retract it. Mike has a plan B, he tracks down Gerard and tries to get him to sign an affidavit saying that Mike was in his class so that he can take it to the judge. Gerard scoffs that there is no way that he is signing anything.

Back at the office, Donna learns that the state’s attorney is officially charging her father with bank fraud. She shouts at Harvey that he needs to get this fixed ASAP, and accuses him of investing in her fathers’ shady business deal years ago behind her back.

Mike returns to the firm with a strategically worded letter from Gerard saying that he was a “great student” – but it doesn’t exactly say that Mike was his student at Harvard. Mike and Harvey take the letter to court and try to get the case dismissed. Gibbs isn’t backing down, but they cut a deal – she agrees to drop all charges against Donna’s dad, in exchange for Harvey dropping the motion to dismiss the case. Donna and her dad are free – but Mike is going to trial.

Harvey heads back to the firm and gives Donna the semi good news. While they are talking, Gibbs shows up with subpoenas for everything in their office. Harvey demands to know why the judge gave her the subpoenas, Gibbs laughs that Louis’s ex Sheila has come forward and confirmed that she wrote the email. Donna heads to Louis’s office to tell him about Sheila’s betrayal – Louis appears to be in stock, he shuts the door and says that he needs some alone time.