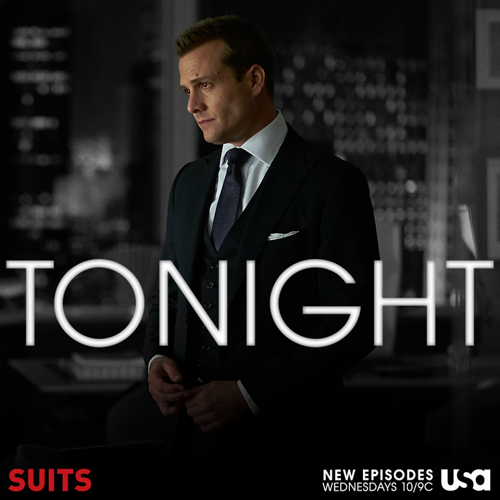 SUITS returns to the USA network tonight with an all new Wednesday February 17, season 5 episode 14 called, “Self Defense.” We’ve got your recap down below! On this evening’s episode, Mike (Patrick J. Adams) wants to represent himself at trial, but Harvey (Gabriel Macht) thinks he should lead the charge; and Louis’ (Rick Hoffman) efforts to remove Sheila (Rachael Harris) from the picture backfires.

On the last episode with time running out before Mike’s (Patrick J. Adams) case went to trial, Harvey (Gabriel Macht) and Mike were at odds over their strategy, and just what lengths they’ll go to in order to defeat Gibbs (guest star Leslie Hope).  Did you watch the last episode? If you missed it we have a full and detailed recap, right here for you.

On tonight’s episode per the USA synopsis “as time runs out before the trial, Mike (Patrick J. Adams) wants to represent himself while Harvey (Gabriel Macht) wants to lead the charge. To decide the issue, Harvey challenges Mike to a winner takes all showdown, but the prospect of beating one another starts to overshadow their real goal – to beat Anita Gibbs (guest star Leslie Hope). Meanwhile, Louis’s (Rick Hoffman) attempt to get Sheila (guest star Rachael Harris) out of the picture comes back to haunt him and Jessica (Gina Torres).”

Tonight’s episode of Suits kicks off in court – Mike and Harvey watch as Trevor takes the stand. Gibbs questions Trevor, he confirms that he just saw Mike a few days ago and Mike asked him not to testify against him. After court Harvey stops by Jessica’s office and tells her that they have a problem – Mike wants to represent himself in court, he doesn’t want Harvey to represent him. Harvey says that he has a plan, he is challenging Mike to a mock trial and whoever wins is going to represent him in court.

Mike stops by a corner store to get breakfast on his way to the office and bumps in to Harold – he tells Mike that he knows that he is going to court and he wants to testify on his behalf. Harold offers to take the stand and tell the court that Mike went to Harvard even though he didn’t. Mike says he doesn’t want to get anyone else involved, but he appreciates Harold’s offer.

Now, it’s time for the mock trial. Jessica takes the stand as the judge – and they have the whole office in the fake court room and posing as jurors. Mike represents himself, and Harvey plays the part of opposing council. They are at each other’s throats after just a few minutes and Jessica calls a recess.

Outside, Louis runs in to Gibbs. She says that she knows Louis sent Sheila to Argentina – and she can’t stay there forever. Gibbs threatens Louis and tells him that if Sheila isn’t back by the time the trial starts then Louis is going to be charged with witness tampering.

Mike corners Harvey in the bathroom and accuses him of cheating in the mock trial. Harvey says that he isn’t cheating, he is just doing the same thing that Gibbs is going to do to him when they go to real trial. Harvey snaps at Mike that he should stop this nonsense and start working on his own defense and find someone that will testify that he was in Harvard.

Louis goes to Jessica and tells her that Anita threatened to press charges against him for witness tampering. Jessica is fed up with Anita and her games – she marches in to Anita’s office and serves her with a restraining order. Anita laughs it off, and says that she will see Louis on the witness stand and he will have to talk to her then.

Mike heads out to find someone to testify on his behalf – he corners Jimmy and asks him to lie and say that he remembers him at Harvard. Mike tries to remind Jimmy that he saved his career and helped his Aunt – but Jimmy won’t budge, he tells Mike that there is no way that he is going to risk going to prison and lie on the stands for him.

That night Louis receives a frantic phone call from Sheila – she is freaking out because someone from New York tracked her down at the hotel and is asking her questions. She told the man to mind his own business, but Sheila is paranoid. Louis gives her a pep talk and swears he will protect her, but Sheila cuts him off and ends the phone call.

Back at the office Harvey and Mike are still fighting over their mock trial – Donna interrupts and says she has bad news. Apparently, Lola screwed up when she was faking his Harvard documents and she left him off one of the semester’s class rankings. Mike wants to ask Benjamin to fix it but Harvey won’t allow it.

At the mock trial, things get ugly. Mike has Benjamin make him and Rachel a fake marriage license and tries to argue that he and Rachel got married in Vegas and she can’t testify against her husband. Harvey laughs at their fake marriage ploy and brings up the fact that Rachel cheated on Mike with Sanders while she is on the witness stand.

After mock trial – Harvey, Louis, and Jessica are all arguing over whether or not they should take the fifth when they go to the real trial. Gibbs shows up unannounced and says that since Sheila disappeared the judge agreed to move up their trial date to tomorrow.

The next day Mike and Harvey head to Mike’s real court case and he has agreed to let Harvey represent him. Trevor takes the stand – he confirms that Mike never went to Harvard, Harvey cross examines Trevor and tears him apart.

Gibbs calls Donna up on the witness stand next – she questions Donna about interviewing Mike for Harvey. Then, she flat out asks Donna if she knew whether or not Mike went to Harvard – Donna panics and pleads the fifth amendment. TO Mike’s shock – Harvey calls Jimmy up on the stand, he lies and says that they went to Harvard together. After he testifies, Gibbs cross examines him, and makes him out to be a liar.

After court that night Harvey calls Mike over her drinks, Harvey tells Mike that he was wrong and he should have let Mike be his own lawyer – that is the only way that they are going to win this case. They need to figure out a way to convince the judge to let them switch lawyers half way through.

Louis heads home and Gibbs is waiting for him – she says that she knows the exact day that Louis found out Mike was a fraud, and that he used the secret to gain leverage and become a partner at the firm. She warns Louis that they don’t have the ballet in prison, and he should call her and cut a deal before it is too late.