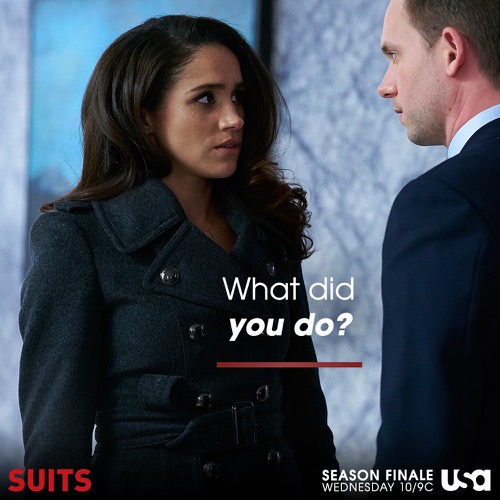 SUITS returns to the USA network tonight with an all new Wednesday March 2, season 5 finale called, “25th Hour.” We’ve got your recap down below! On this evening’s episode, in the Season 5 finale, Mike (Patrick J. Adams) makes the one play he has left when faced with a court battle that could go either way.

On the last episode Louis considered Anita Gibbs’ offer to turn on his compatriots; Rachel advised Mike on how to win hearts and minds in the courtroom; Donna begged Harvey to not do anything rash while Jessica thought he should; and Harvey and Mike contemplated a new strategy. Did you watch the last episode? If you missed it we have a full and detailed recap, right here for you.

On tonight’s episode per the USA synopsis “as the judgment draws closer, it threatens to shatter the lives of the people closest to Mike; faced with an uncertain outcome, Mike makes one final play.”

Tonight’s episode of Suits kicks off with Mike negotiating a deal with Gibbs – he agrees to do two years in prison. He comes out of the room and Harvey is waiting for him, Mike confirms that he took the deal and is going to prison for two years.

Harvey is furious, he says that there is no way that he is going to let Mike take the deal and the judge hasn’t finalized it yet. Meanwhile, Rachel is panicking, she can’t believe that Mike just signed away two years of their future. Harvey rushes to the court room to stop Gibbs from telling the judge that they made a deal. Donna shows up at the court as Rachel is leaving – she tells Donna that Mike took the deal.

In the judges’ chambers, Harvey is trying to get Gibbs’ deal thrown out, but Gibbs argues that the deal is solid and she and Mike both signed it. Mike arrives and tells Harvey to let it go. He signed the deal, he wants the deal, and he is taking it. The judge tells Mike that he has 72 hours and then he has to surrender himself to prison.

Outside of court Gloria, the mother of Mike’s friend (she testified on his behalf) is waiting for him. She is worried – she can’t believe that he took the deal, she warns him that he will never survive two years in prison. Mike won’t listen, he says he has to go and find Rachel.

Robert Zane is livid when he learns that Mike is going to prison and his daughter Rachel is broken hearted. He is determined to blame Harvey and Jessica pay. Robert corners Louis and warns him that he is starting a shit-storm to make everyone at the firms’ lives a living hell. Louis laughs that there is a non-compete order, and no one at the firm is going to help Robert. But, Zane reveals that there is a way around the non-compete orders, and Louis’ old pal Katrina told him the way around it.

Meanwhile, Harvey is on a mission – he needs to know what the verdict was going to be and whether Mike would have went to prison if he hadn’t taken the deal. Harvey tracks down one of the members of the jury – and is shocked to hear that they had decided Mike was not guilty, because Gibbs did not make a solid case. If Mike had just had faith in himself and Harvey and went back to the court room and got the verdict – he would be free right now.

Harvey heads back to his office, Gloria corners him and tells him that she is worried about Mike, she knows he won’t survive in prison. Harvey blows her off and storms in to his office. Mike arrives – he is upset, Harvey lies and tells him that he talked to a member of the jury and he confirmed the verdict was guilty. Mike is relieved because he believes that he did the right thing taking the deal. Mike heads home so he can spend the last two days before he checks in to prison with Rachel – he tells her that the jury was going to find him guilty, and they have sex on the sofa. Rachel announces that she wants to marry Mike before he goes to prison.

In Jessica’s office, she gets a visit from Jack – he turns in his resignation papers and says that he is going to go work at Robert Zane’s office. Jessica is furious, she tries to blackmail him but Jack laughs in her face. She can’t expose him for what he did, because she will just be admitting that yet another one of her lawyers committed another crime while on her watch.

Harvey and Donna are up in his office going through all of the paperwork from Mike’s trial – he is trying to find anything that they can use to appeal the case. Tensions are running high and Donna and Harvey are bickering. Donna has a theory. She thinks that they should work with Gibbs, and trade Liberty Rail for Mike’s freedom.

Jessica has a chat with Robert Zane – she tries to sue him for taking Jack from her. Robert laughs that they violated the non compete clause, one of the senior partners committed a crime by conspiring to commit fraud with Mike. Katrina has a recording of Louis admitting that he knew that Mike was a fraud – so they have proof. Jessica is furious, she tells Louis to deal with it ASAP. Louis pays Katrina a visit and threatens to expose her for forging a document for him when they worked together if she doesn’t destroy the recording.

The next morning Mike Ross is on a mission. He is trying to get Rachel’s parents to come to their shot gun wedding. Obviously, Robert is not having it. Mike begs Rachel’s mom to try and get her husband on board before they say their “I do’s” – wants them there to support Rachel.

Harvey is trying to work a miracle. He visits Evan and begs her for the Liberty Rail case so that he can try to trade it for Mike. Evan agrees to give it up, if she gets access to any of the partners at the firm she wants, and any clients she wants. Harvey goes back to Jessica and somehow manages to convince her to agree to Evan’s terms for the off chance that he might be able to strike a deal with Gibbs at the last minute.

Harvey pays Gibbs a visit at her office, he tries to give her the Liberty Rails case and tells her that she will get dozens of murderers over measly little Mike Ross. But, Gibbs won’t take the deal. She says that the only way he can save Mike is by taking his place and going to prison for him. Harvey heads home and gets drunk, he and Mike wind up in a screaming match and start beating the crap out of each other in Harvey’s kitchen. Harvey reveals that Mike would was going to be found guilty. They both wind up lying on the floor, and crying like large man-babies. Meanwhile, back at the office – Evan is gutting Jessica’s team. She just lost half of her firm for a deal that Gibbs wouldn’t even take.

The next morning it is time for Rachel and Mike’s big day – everyone gathers at the church, even Rachel’s parents show up to support her, although they are not happy. Mike is an emotional wreck. Right before the ceremony starts, he takes Rachel aside and tells her that he can’t take away her future. He tells Rachel that he wants her to live her life, finish school, and become a lawyer – and when he gets out in two years, if she still loves him then they can be together.

Mike leaves the church and Harvey is waiting for him outside. They ride to the prison together, Harvey gives him a pep talk and they say their goodbyes before Mike Surrenders himself and becomes an official inmate.