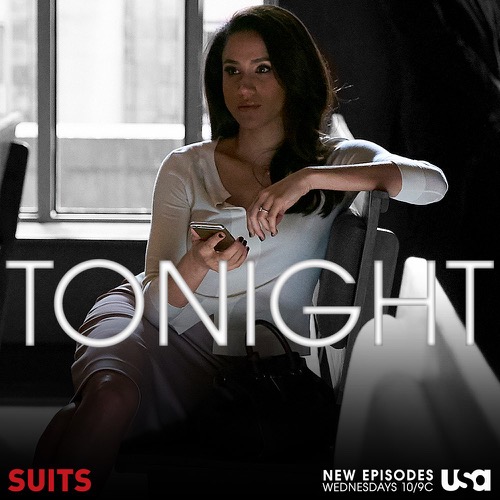 SUITS returns to the USA network tonight with an all new Wednesday February 24, season 5 episode 15 called, “Tick Tock.” We’ve got your recap down below! On this evening’s episode, Louis (Rick Hoffman) considers Anita Gibbs’ (Leslie Hope) offer to turn on his compatriots; Rachel advises Mike (Patrick J. Adams) on how to win hearts and minds in the courtroom.

On the last episode as time ran out before the trial, Mike (Patrick J. Adams) wants to represented himself while Harvey (Gabriel Macht) wanted to lead the charge. To decide the issue, Harvey challenged Mike to a winner took all showdown, but the prospect of beating one another started to overshadow their real goal – to beat Anita Gibbs (guest star Leslie Hope).  Did you watch the last episode? If you missed it we have a full and detailed recap, right here for you.

On tonight’s episode per the USA synopsis “Louis considers Anita Gibbs’ offer to turn on his compatriots; Rachel advises Mike on how to win hearts and minds in the courtroom; Donna begs Harvey to not do anything rash while Jessica thinks he should; and Harvey and Mike contemplate a new strategy.”

The next day Mike and Harvey head to court to face off against Gibbs again, they switch roles, Mike is now representing himself and Gibbs is NOT happy about it. Gloria takes the witness stand and confirms that Mike got her son Clifford out of prison – he was found guilty of a murder that he didn’t commit. Gloria breaks down in tears and sobs that Clifford was shot working at a diner by a robber. She tells the court that Mike helped get her son out of prison, and if he had been their lawyer from day one – Clifford never would have been found guilty to begin with.

Gibbs tries to cross-examine Gloria, however she fumbles. Gloria only helps Mike’s case more by shouting that “Mike Ross was the only lawyer that ever gave a damn about her son.” Right now, the ball seems to be in Mike’s court. Later that night, Rachel and Mike head home, Rachel gives him a pep talk and promises Mike that if he tells the court his story – they will let him go – because they will love him as much as she does.
Louis is sticking his nose where it doesn’t belong – he got a secret transcript from court, and he knows all about Mike and Harvey switching. Louis corners Jessica, he is freaking out, he says that they are going to lose the trial and they are all going to jail – that’s why Harvey switched places with him. Harvey knew they were going to lose and didn’t want the loss on his record.

In court the next day Mike gives a moving closing argument – he promises the jury that if they give him a another chance, he won’t stop squandering his gift as a lawyer and he will start helping people again, instead of helping greedy companies get more money. Gibbs gets up and gives an equally eloquent closing argument – reminding the jury that if everyone just became a lawyer because they wanted to and didn’t go to college, the world would be a horrible place.

After court, Mike is panicking – he is certain that the jurors were swayed by Gibbs’ speech. The jurors leave to decide Mike’s fate. But, Mike refuses to leave the courtroom. He tells Harvey that he isn’t getting out of his seat until the jury comes back with a verdict. Rachel tries to convince him to leave but he refuses, so she goes off to find them some lunch nearby.

Harvey heads back to the office, he tells Jessica that he doesn’t think it looks good – and they need to find grounds to call a mistrial ASAP. Harvey knows that if a mistrial is called, Gibbs doesn’t have enough pull to take it back to court again Harvey tries to get the list of jurors from Donna, she shouts at him that she isn’t getting her friend Stephanie to break the law and give them the list of jurors.

Louis overhears Donna and Harvey arguing – Donna confesses to Louis that Harvey wanted her to get the list of jurors but she said no. Louis shouts at her to just do it, Harvey needs a mistrial because he obviously thinks that are going to lose.

Back at the court, Mike overhears a man named Mr Diaz arguing with the DA. The DA is trying to bully him in to taking a deal and doing 5 years in prison just for trying to sell TV’s off the back of his delivery truck. Mike steps in and offers to be Diaz’s lawyer – he warns him that he can get a much better deal. Diaz hires him, and Mike gets his case file to look over while he is waiting for the jury to come back.

Meanwhile, Harvey is scheming. He tracks down Gibbs’ right hand David – and reminds him that Mike Ross took the LSAT’s for him and if the truth comes out, he will lose his license to practice law. Harvey blackmails David in to going to the court house cafeteria and waiting for one of the jurors to come in – then he wants David to sit down and have coffee with them, if a member of Gibbs’ team is fraternizing with the jurors then it will be grounds for a mistrial.

Rachel and Mike spent all day going over Diaz’s case files – now it is time for Diaz’s court date. Mike manages to have the case dismissed, he found that the police got the search warrant illegally. After Mike helps Diaz, he tracks down Gibbs in her office. He tries to cut a deal with her – he agrees to plead guilty as long as she agrees to not go after anyone at Pearson Spector. Gibbs laughs and refuses to cut a deal – she scoffs that she doesn’t need to because she knows the jury will find her guilty.

Later that night, Louis shows up at Gibbs’ office – he wants to talk deals with her. Gibbs says that she needs PROOF that Harvey knew Mike Ross was a fraud. When Louis says he doesn’t have any physical proof, she basically laughs him out of the office, and refuses to talk deals with him. Meanwhile back at the firm Harvey gets bad news – David never did what he told and didn’t tamper with any of the jurors, so they aren’t going to get the mistrial.

Louis heads back to the firm and attacks Harvey – he screams at him that he hired a fraud and they are all going to pay for it. Harvey screams back at Louis and shouts “So What I Hired a Fraud!” Little does Harvey know, Louis is recording their entire conversation, so now he has the proof that Gibbs wants. Louis heads to Jessica’s office and tries to get her to roll over on Harvey with him – but she refuses, and says that he is “despicable.”

Meanwhile, Gibbs shows up at Mike’s house to counter the deal that he tried to make with her. Gibbs says that if he doesn’t do at least two years of jail time – then she is going after at least one of his partners. After Gibbs leaves, Mike and Rachel have a screaming match – she doesn’t want Mike to take the deal, she thinks that the jury is going to find them innocent.

Harvey shows up on Donna’s doorstep and he is distraught – he just got in a fight with David, who said that he is a bully. Harvey says that he wants to turn himself in, to save everyone, Donna cries and shouts at Harvey that he doesn’t have to be the hero and fall on his own sword – she doesn’t want to lose him.

Early the next morning Mike gets a phone call from the prosecutor of the DA case, he slips out of bed early and rushes to court. He is determined to finish helping Diaz before the verdict comes in from his own case and he might lose his license. After his meeting, Mike is inspired by Diaz agreeing to testify against his own friends to save his own ass – and he rushes off.

Back at the courtroom, Rachel learns that the jury came in with their verdict, and they will find out in exactly one hour. When Harvey realizes that Mike hasn’t come back, he bolts for the elevator – he is trying to stop Mike before it is too late. Mike marches in to Gibbs’ office and announces that he is going to take the deal.