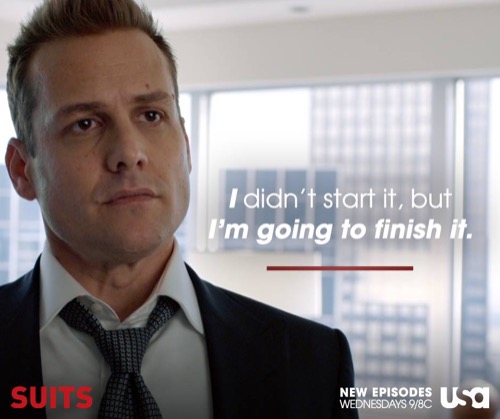 SUITS returns to the USA network tonight with an all new Wednesday July 15, season 5 episode 4 called, “No Puedo Hacerlo.” We’ve got your recap and spoilers down below! On this evening’s episode, Harvey [Gabriel Macht] steps outside his comfort zone to help a client who has a special tie to the firm; Mike [Patrick J. Adams] and Zane work their class-action case together, but Mike discovers they have different ideas of what a win is; and Donna [Sarah Rafferty] advises Louis [Rick Hoffman] on how to settle a feud.

On the last episode Harvey (Gabriel Macht) brought some star power to his ongoing conflict with Jack Soloff (guest star John Pyper Ferguson) – a conflict that Louis (Rick Hoffman) and Donna (Sarah Rafferty) couldn’t seem to stay clear of. Mike (Patrick J. Adams) brought in Robert Zane (guest star Wendell Pierce) to co-counsel a case, pitting his instincts as a lawyer against his desire to stay in his future father-in-law’s good graces. And while Jessica (Gina Torres) mediated between Mike and Zane, she tasked Rachel (Meghan Markle) with an unusual assignment. Did you watch the last episode? If you missed it we have a full and detailed recap, right here for you.

On tonight’s episode per the USA synopsis “Harvey (Gabriel Macht) steps outside his usual area of expertise, in order to take a case from a client who has a special tie to the firm. Mike (Patrick J. Adams) and Zane (guest star Wendell Pierce) work their class-action case together, but Mike learns they have different ideas about what constitutes a win – for themselves, and for their clients. And Donna (Sarah Rafferty) counsels Louis (Rick Hoffman) on the best way to settle a feud.”

Its personal between Louis and Harvey. At first their petty arguments were just for fun but, after the last big bust up of theirs, these two have now gotten to a point where they can no longer even claim to be friends. So when Louis knew he had to go to Harvey and ask for a favor – he pretty much knew he was screwed.

See Louis’s sister Esther is going through a divorce. Only it’s not just any divorce. It’s a messy one with Esther’s 50 million dollar company on the line.

Thus Esther said she didn’t want her brother to represent her. Going as far to explain to Louis that she felt like he would be too emotionally attached to the case. And that it would be better if another lawyer, such as the famous Harvey Specter, would represent her in court.

So ultimately Louis had to go crawling to Harvey!

Donna had told him about how Harvey felt in regards to family. So later when Louis first approach to get Harvey to take the case failed – he plead with Harvey to do this because it was family. Esther it seems had never asked her brother for anything before so this time Louis doesn’t want to let her down.

However, once Harvey did take the case then it became slightly uncomfortable for everyone. Bottom line is Esther doesn’t look anything like her brother. In fact she’s by far the more attractive sibling. And long before he found out who she was, Harvey flirted with her.

And Esther flirted back.

There is chemistry there and even Rachel saw it for herself. So there’s no way these two can continue working with each other without having some kind of flare up. And Louis for one is definitely worried about how Harvey will take his revenge.

Though Harvey isn’t that bad of a guy. He found out that Esther had left her husband because he had cheated on her and so he then worked to ensure her dirt bag of a husband wasn’t going to get 50 percent of the company. So if anything he did exactly what Louis would have done.

And if there was anyone that was being irrational then it would have to be Mike. Mike and Robert Zane received a well off offer for their clients but Mike wanted to turn it down. He said the clients deserved more than 70 grand a person.

So Robert ended up going over Mike’s head and getting Jessica’s assistance in order for them to take the agreement. And Mike just couldn’t deal with that. He kept on chipping away at the case until eventually he found evidence of Robert playing dirty.

Robert failed to mention that clients of his recently bought into the insurance company they were suing and if Robert knew about this then he could be in trouble for stock manipulation.

And Mike was actually willing to pursue this, even if meant landing Robert in hot water, right up until he spoke to Rachel. Rachel said an attack on her father was an attack on her. So Mike found a way to drop it with Robert and simply accept the original plea agreement.

It’s what his clients wanted all along and Jessica also threw in an added bonus that would potentially get Robert off the hook for inside trading.

Thus Mike’s plan to grow closer with his future father-in-law worked out alright. But Rachel is still suffering from cold feet about an actual future with Mike. So there’s a chance these two aren’t going to be walking down the aisle.

And luckily for Louis, Harvey denied his attraction to Esther in the end. It seems like he knew better than to make their feud too personal.