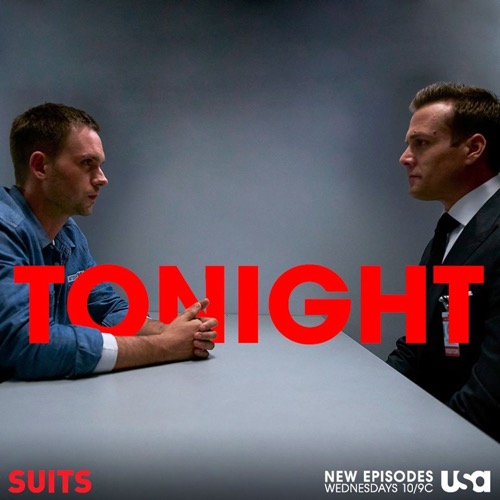 SUITS returns to the USA network tonight with an all new Wednesday, July 20, season 6 episode 2 called, “Accounts Payable,” and we’ve got your Suits recap down below! On this evening’s episode, PSL faces a class action lawsuit from former clients

On the last episode in the Season 6 premiere, Mike transitioned to prison life; and Harvey and the others coped with the fallout of Mike’s plead deal. Did you watch the last episode? If you missed it we have a full and detailed SUITS recap, right here for you.

On tonight’s episode per the USA synopsis “PSL faces a class action lawsuit from former clients; and Mike has problems with a fellow prisoner.”

Tonight’s episode of Suits kicks off with Mike Ross in prison, with his real roommate. Mike has been up all night scheming about ways to get revenge on inmate Frank Gallo. He’s mad at his new roommate for letting Frank sneak into the room. It looks like Mike isn’t making too many friends in prison.

Donna shows up at Rachel’s door with coffee. Rachel insists that she is doing fine without Mike. Donna has a surprise for Rachel, apparently she somehow got her on the prisoner visitor log to see Mike, even though they aren’t married and aren’t family.

In prison, Mike heads to the cafeteria for breakfast, he asks the guard if he can use the phone and says that it is an emergency. The guard doesn’t want to hear it – and says it’s not an emergency unless there is a bomb falling. Mike bumps in to Frank Gallo, Frank taunts Mike and says that Rachel texted a sexy picture to the phone he used, and he is passing them out to all of the inmates. Mike freaks out and tackles Frank in the middle of the cafeteria, and the guards drag them both away to solitary confinement.

Harvey greets Jessica with a cup of coffee. They head to the office and Louis is screaming at new paralegals that he hired. Jessica scolds him and says that they can’t afford to hire new staff. Louis says that he hired movie extras to make it seem like the firm was still doing well. Jessica tells him to send them home ASAP.

Rachel shows up at the prison to visit Mike and they won’t let her in. Apparently after his altercation, they suspended his visitor priveledges for 2 weeks. Mike meets with the prison counselor, Frank played him again, and he lied and never had any photos of Rachel. So, Mike looks like the bad guy…again.

Jessica, Harvey, and Louis meet with the lawyer that is representing the class action lawsuit on every case that Mike worked on and defrauded. They offer the lawyer Arlene $10 Million, she scoffs and says that it is a joke. Jessica warns Arlene that the offer will be on the table for an hour, and then the employees that walked will get all their buy-ins back and there won’t be any money for the class-action lawsuit.

Rachel tells Harvey that Mike got into a fight in prison. Harvey rushes down to see him and find out what is going on. Mike reveals that the guy that has been harassing him is Frank Gallo, he’s upset that Harvey put him behind bars. Mike makes Harvey swear that he won’t get involved. Harvey leaves and he bumps in to Frank on the way out – Frank screams at him that Harvey owes him 13 years of his life. Frank heads back inside the prison and threatens Mike, he warns him that he talked to Harvey, and he’s not safe.

Jessica heads out for coffee and bumps in to Jack. He knows that she used his buy-in and everyone else’s to settle the class action lawsuit. Jessica scoffs and tells him that there is nothing he can do because the firm in an LLC. Jack hands her a piece of paper and says that he works at a new powerful firm, Robert Zane’s, and he and the other partners are suing her for their money back.

Jessica heads to Robert Zane’s office, he says that he has nothing to do with Jack and the partners suing her. Jessica pleads with Robert to stop the lawsuit, she tells him that if Jack takes her to court, then she is “dead in the water.”

Harvey heads back to the office and Rachel is waiting for him. She demands to know what is going on, Frank Gallo has been texting her all day pretending to be Mike. Harvey confesses that Frank has an axe to grind with him. Rachel shouts at Harvey that he needs to do something. Harvey meets up with Shawn Cahill, and calls in a favor. He reminds Shawn that Mike helped him put away Forseman, and now Mike needs his help. Shawn agrees to see what he can do to get Frank moved to a different prison.
Jack tracks Jessica down and he is furious, Robert Zane shut down his lawsuit to get his buy-in back. Jack reveals that he needs his money, because he can’t afford Robert Zane’s buy-in at his firm. He wants Jessica to pay him his money back out of her own pocket, and she refuses.

Louis heads to the court to represent the firm and settle the class action lawsuit. Just as they are about to agree to the terms, a man named Elliot barges in and interrupts, he says that he represents an insurance agency that wasn’t included in the class-action lawsuit. The judge gives him 24 hours to present his evidence. After court Louis curses Elliot out – apparently Jack sent him to botch the deal because he wants the money.

Harvey heads to the prison and tells Mike that he pulled strings and Shawn is trying to move Frank. Mike demands to know what happened between him and Frank. Harvey confesses that Frank was going to jail for conspiracy to commit murder and he is dangerous, they lost the evidence so they sent him to jail for racketeering instead.

Harvey heads back to the office and Jessica and Louis fill him in on the class action lawsuit. If they don’t pay Jack his buy-in money, then Elliot is going to shut down the lawsuit and they are going to be completely screwed.

Elliot and Harvey sit down for a meeting, they bicker back and forth. Harvey tries to pay off Elliot, Elliot laughs that he didn’t come for money – he came to take something far more valuable. Elliot tells Harvey he wants the “piece of shit duck painting” that is hanging on the wall, or he wants $20 Million. Harvey puts up a fight, then he reluctantly lets Elliot have his prized painting.

In prison, Mike is sitting in the common room and Frank comes to taunt him with a few goons. All of the other inmates disperse, and so do the guards that Frank paid off. Frank pulls out a knife and is about to stab Mike, and a guard comes to the rescue, Mike’s roommate went and got help for him. Jessica heads in to Harvey’s room to check on him, she saw Elliot leaving with the painting, she remembers that Harvey said the painting was the only happy memory he had form his mother.Jack stops by Robert

Jessica heads in to Harvey’s room to check on him, she saw Elliot leaving with the painting, she remembers that Harvey said the painting was the only happy memory he had form his mother.Jack stops by Robert

Jack stops by Robert Zae’s office, he tells him that he doesn’t have the money to buy in as a partner, Jessica shows up and rescues him and hands over a check to Robert Zane for his buy-in. She tells Jack that the older she gets, she would rather have friends than enemies.

Tonight’s episode ends with Harvey sitting in his office drinking, and looking through an old family photo album. There’s a picture of his mom painting the duck painting that he just gave up.