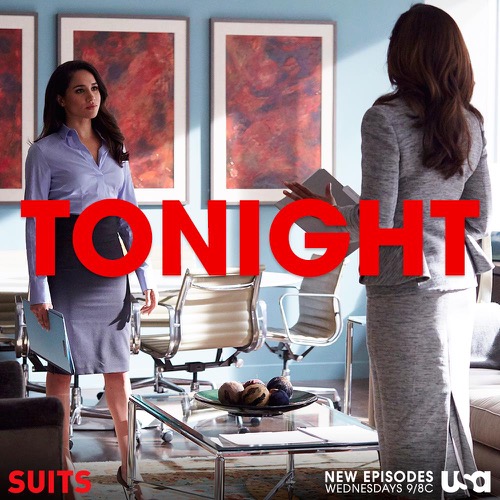 SUITS returns to the USA network tonight with an all new Wednesday, August 24, season 6 episode 7 called, “Shake The Trees” and we’ve got your Suits recap down below! On this evening’s episode, Harvey, (Gabriel Macht)  Louis (Rick Hoffman) and Donna (Sarah Rafferty) search for a link to Sutter’s inside trading.

On the last episode, Harvey defended Sutter from Cahill; Mike’s past threatened to derail his mission. Did you watch the last episode? We’ve got your detailed Suits recap right here.

On tonight’s episode per the USA synopsis “Harvey, Louis and Donna search for a link to Sutter’s inside trading; Mike goes to extremes to get Kevin on his side; and Rachel and Jessica deliver bad news to Leonard Bailey.”

Tonight’s episode of Suits kicks off with Amanda and Rachel at the prison, they meet with their client Leonard Bailey. They have bad news for the inmate, Rachel explains to him that his execution date has been set – it’s only 30 days away. Leonard gets emotional and breaks down, Jessica explains to him that they are going to file a motion to delay it. He demands to know if they have found Maria to help his case – and Jessica tries to calm him down.

Cahill meets with the judge, Harvey, and Sutter. Cahill says that he has Sutter’s trading software on a flashdrive, and it is responsible for 95% of Sutter’s trades. And, the other 5% of stocks that were traded Sutter did with inside trades. The judge announces that they are going to go to trial and denies Harvey’s motion for dismissal. After court, Sutter is fuming, he wants to know which one of his employees sold him out and turned over the software. Meanwhile, Cahill takes Harvey aside and tells him that they are going to court in 5 days and he needs info from Mike ASAP or else there won’t be a case.

At the office, Louis surprises his secretary and Donna with donuts. He says he needs advice, he has a date with Tara in a few days and he needs their help to make sure that their “souls merge as one.” Donna refuses to help, he says that they are done wasting manpower on Louis’ quest for love and he needs to figure this one out himself.

Harvey heads to the prison and meets with Mike – he says that he doesn’t have any information from Kevin yet, which is a lie. Harvey tells Mike that he leaked the software to Cahill, he didn’t have a choice. Mike warns Harvey that Kevin is sensitive and he is going to need some time. Harvey reveals that they are going to trial … and he doesn’t have any more time.

Rachel and Jessica head back to the office – Rachel is emotional after their talk with Leonard. She’s feeling a bit hopeless. Jessica tells him that they don’t have time for all that, they need to find Maria Gomez and put in a motion to delay the execution.

In prison, Mike is arguing Kevin. Kevin has zero interest in cutting a deal or rolling over on Sutter, apparently Sutter promised him and his wife a ton of money if he kept quiet and served his time in prison. Kevin would rather lose years of his life and get a fat paycheck, than roll over on Sutter Meanwhile, Harvey has Louis on the case – he tells him to go through Sutter’s files and find any traces of insider trading.

At the office, Donna gets a collect call from Mike. He needs a favor from her – and wants to keep it just between the two of them. Mike says he needs her to impersonate someone for him again – but this time it will be totally legal.

Jessica and Rachel head to court, they are trying to delay his execution date. They fill the judge in on Leonard Bailey’s witness Maria Gomez and the judge agrees to give them a week to try and find her. The judge warns them that after the week is up – they are moving forward with the execution date, and they can’t put in any more motions on the case.

Louis is freaking out, Harvey wants him to reverse Sutter’s inside trades. But, he will need the stock trader’s help in the bull pen – the ones that he doesn’t get along with. Donna pays them a visit and convinces them to give Louis access to their stock database, with some of her charm and some minor blackmailing. Meanwhile, Mike is making a

Meanwhile, Mike is making a power move of his own in prison. He secretly meets with Kevin’s wife Jill – who is a little confused as to why he called her. Mike explains that he knows she is making inside trades for her father, and that Kevin is taking one for the team. Mike warns Jill that Cahill is out for blood, and if she doesn’t cut a deal with the DA soon, she will be behind bars with Kevin and her father too.

Rachel meets with a private investigator named Carter – he tries to track down Maria Gomez. She learns that Maria’s records are sealed and she got her name changed in New Jersey two years ago because of a dangerous ex-husband. Jessica tells Rachel that it is time to suck it up and go ask her father for help, he has connections at the DA office in Jersey and may be able to get a hold of Maria’s new name.

At prison, Kevin is NOT a happy camper, his wife Jill told him about her meeting with Mike. Kevin tells Kevin that if he ever contacts his wife again, then he will “beat the sh-t out of him.”

Harvey heads back to the office feeling defeated, he spent the day at Sutter’s office meeting with his employees and trying to figure out who is working on the inside trades with him and got nowhere. Luckily, Louis has good news – he found the smoking gun, and the person that has been working with Sutter on the inside trades, it’s one of Sutter’s old employees who now runs their own consulting bank.

Harvey rushes to meet Cahill, he tells him that he found the inside trader, Phillip Allen. Cahill just finished meeting with Allen though – and he cut a deal with him, he’s rolling over on Sutter. Cahill and Harvey’s plan worked – they are putting Sutter away and Mike is going to get out of prison. Harvey rushes to prison to tell Mike the good news, Mike doesn’t want to take the deal though, unless Harvey can get a deal for Kevin’s wife Jill too.

Mr. Forrester shows up at the office late at night, and he is NOT happy. His daughter was one of the girls that Leonard Bailey was convicted of killing and he is furious that Rachel and Jessica are trying to get him out of prison. Rachel tries to argue that Leonard didn’t receive a fair trial and he may be innocent, but Forrester doesn’t want to hear it. He gets loud and crazy, and Gretchen has to step in and kick him out of the office, Rachel is pretty shaken up over it.

Jessica gets a phone call from Gretchen and heads back to the office to check in on Rachel. She gives her a pep talk and warns Rachel that when people are upset, they lash out, sometimes at the wrong person. Jessica invites Rachel out to get a drink with her.

Donna surprises Louis with a dinner reservation for his date with Tara, he is thrilled that she came through for him after all. Louis and Tara head out to dinner, everything is going smoothly, then she drops a bomb on Louis and tells him that she has a boyfriend that live in Los Angeles 6 months out of the year, they have an open relationship. Louis is bamboozled, he’s never dated someone who is in a relationship. He tells her that he needs a second to process what is happening. But, he decides to stay at the restaurant with her.

As Jessica and Rachel are leaving the office to go to the bar, Rachel’s father arrives. He has bad news for them, he found their witness Maria Gomez…and she is dead.

Mike meets with Gallo in prison, Gallo is furious because Mike and Harvey haven’t kept their promise and got him out of prison yet. Gallo has figured out that Mike is ratting out Kevin and Sutter and cut a deal. He threatens to tell Kevin everything if Mike doesn’t get him out of prison ASAP.

Harvey heads to Cahill’s office to meet with him about getting Jill a deal – but Cahill has bad news, the DA office pulled Mike’s deal and he isn’t getting out of prison. Harvey begs Cahill to fix it, but Cahill says there is no other way.