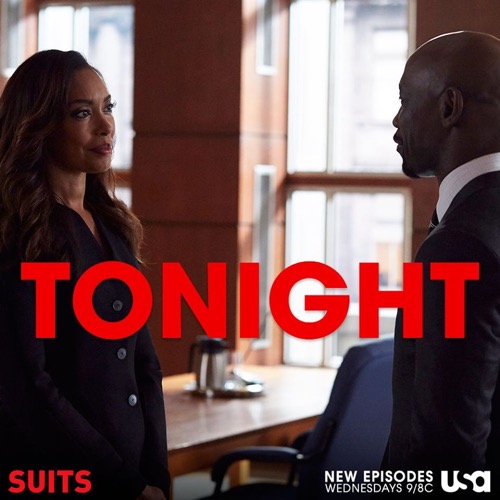 SUITS returns to the USA network tonight with an all new Wednesday, August 31, season 6 episode 8 called, “Borrowed Time” and we’ve got your Suits recap down below! On this evening’s episode, Harvey (Gabriel Macht) rebuts Cahill’s star witness; and Mike (Patrick J. Adams) tries to deliver one of his own.

On the last episode, Harvey, Louis and Donna searched for a link to Sutter’s inside trading; Mike went to extremes to get Kevin on his side. Did you watch the last episode? We’ve got your detailed Suits recap right here.

On tonight’s episode per the USA synopsis, “Harvey rebuts Cahill’s star witness; and Mike tries to deliver one of his own. In other events, Jessica and Rachel try to delay Leonard’s execution; and Louis adjusts to life as “the other man.”

Tonight’s episode of Suits picked up where we left off last week – Harvey is furious, he barges in to Jessica’s office and announces that the DA pulled Mike’s deal. Jessica tells Harvey that if there is no more deal for Mike, then he is no longer throwing Sutter’s case, and he needs to kill Cahill in court.

The next day, William Sutter’s trial kicks off. Cahill makes his opening statements in court. Harvey is not playing any more games with Cahill. He asks the judge for a three-day extension because Cahill announced that he had a new witness – Phillip Allen.

Jessica and Rachel head to prison to give Leonard Bailey more bad news. They found the witness, Maria Gomez, and she is dead. Now, they are back to square one, and they need more time to find another witness. Leonard has a sick Aunt named Harriett, Jessica and Rachel are going to try to use her illness to get an extension on his execution. The only problem is, Harriet disowned Leonard years ago, and he hasn’t spoken to her since.

In prison, Mike is having breakfast in the cafeteria. Kevin joins him and Mike apologizes again for contacting his wife. The two roomies make amends, and then Gallo interrupts their breakfast. Mike reassures Gallo that he and Harvey are working on his parole case. Gallo doesn’t want to hear it, he’s out of time, he tells Mike he has until 6:00 PM tonight.

Rachel shows up on Harriet’s doorstep and says that she is working on Leonard’s case. Harriet isn’t really interested in hearing about Leonard’s case – she says that he is “no good.” She tries to shut the door in Rachel’s face, but Rachel convinces her to sign a request for the judge to delay the execution.

Louis arrives at the office and Donna can’t wait to hear about his date the night before. He reveals that Tara dropped a bomb on him and revealed that she has a boyfriend and she is in an “open relationship.” Donna thinks that he shouldn’t give up yet, if she went out on a date with Louis, then that means she isn’t happy in her “open relationship.”

Mike calls Harvey’s office, he is panicking. Mike wants to know what is up with Gallo’s parole. Donna confesses that Harvey never did any work on Gallo’s case because he thought Mike was getting out of prison. Donna reveals that Mike’s deal is gone, and Mike freaks out on the phone. If he doesn’t get Gallo his parole hearing, then he will tell Kevin that Mike is an informant.

Meanwhile, Rachel returns to the office and she gives Jessica the paperwork that she needs to delay Leonard’s execution. Rachel is a bit shaken up though, she is beginning to wonder if she and Jessica are right about Leonard – even his own Aunt thinks that he is a cold-blooded murderer.

Jessica heads to court to see the judge to ask for an extension for Leonard, she has an awkward run-in with her ex Jeff.

Meanwhile, Harvey is still fighting Cahill ad his new witness. He meets with Cahill and his witness Phillip Allen. Allen confirms that he was giving Sutter insider trade secrets. But, Harvey points out that Phillip never actually spoke to William Sutter, he was giving the information to Sutter’s daughter Will.

After their heated meeting, Cahill and Harvey argue in the bathroom. Cahill realizes that Harvey just made his star witness useless, unless he gets Jill to testify against her father, and that means he will need Mike and his roomie Kevin too. Mike might get his deal back after all.

In prison, Mike corners Kevin in the kitchen and tries to get him to call Jill and get her to cut a deal. Kevin brushes him aside and wants to know why Mike and Harvey are so interested in his wife cutting a deal. Mike confesses to Kevin that if he gets his wife to cut a deal, then they are going to let Mike out early. Kevin freaks out and attacks Mike when he realizes that Mike has gone informant on him, they throw Kevin in solitary after the guard break up the fight.

Jessica and Rachel head back to prison and tell Leonard that they were able to buy him more time and push back his execution date. Leonard is still upset, he doesn’t care about his execution date, he’s upset because Rachel didn’t convince his Aunt that he was innocent. Leonard snaps at Jessica that she doesn’t care about him, all she cares about is her fancy office. Afterwards, Jessica is pretty upset – so she invites Jeff to go out to dinner with her so that they can talk.

Mike meets with Gallo in the bathroom. Mike tells Gallo that he and Harvey will get him his parole meeting like they discussed, but on one condition, Gallo needs to pull some strings and get Kevin out of solitary. Mike finally gets to talk to Kevin – and he tries to convince him to call his wife Jill and get her to take Cahill’s deal. Meanwhile, Donna is working on Kevin’s wife Jill, she pays her a visit at her house and tells her she needs to go back to the prison and see Kevin and Mike again.

Louis heads out on a dinner date with Tara. He has a full blown meltdown in the restaurant and shouts that he can’t share her with another man. Tara is apparently turned on by his passion and they head back to her apartment to make love. The next day, Louis takes a shower, when he comes out of the bathroom Tara has bad news – she says that her boyfriend just called and he is coming to town.

Harvey pays Sutter a visit, he records their conversation, and records Sutter saying that his daughter Jill owes him for the lavish lifestyle he gave her for her whole life, and he is going to let her go to prison for a few years, rather than him. Harvey and Mike take play the recording for Jill and Kevin. She’s so hurt by what her father said, she agrees to cut a deal with Mike and testify against her father.

The next day Mike meets with Cahill with all of the necessary paperwork – his deal is back in motion, and Mike is going to get out of prison after all.

Harvey meets with Sutter, and Sutter is furious that Harvey sold him out and got Jill to turn on him. Harvey scoffs that he will never be able to prove it. And, he leaves a deal with Sutter from the DA office. Harvey recommends he signs the deal, now that Jill is testifying against him, he doesn’t stand a chance in court.

Donna finds Rachel working late at night in the office, she invites Rachel out for drinks to celebrate. Rachel is a little confused – Donna tells her that Mike and Harvey did it, they got Sutter behind bars, and Mike is coming home. Rachel cries tears of joy.