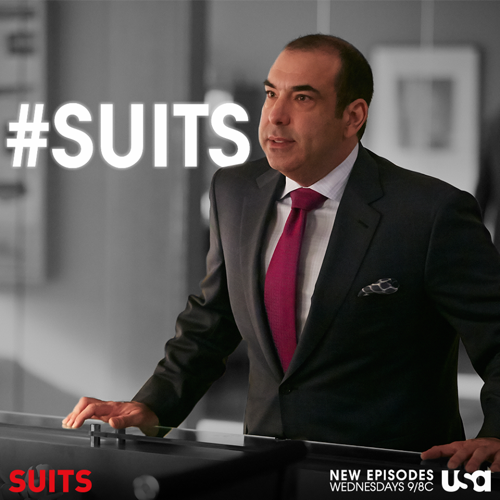 SUITS returns to the USA network tonight with an all new Wednesday, August 3, season 6 episode 4 called, “Turn,” and we’ve got your Suits recap down below! On this evening’s episode, Mike (Patrick J. Adams) may take a deal to reduce his sentence.

On the last episode, Mike tried to remain safe without breaking Danbury’s unwritten rules; Jessica and Harvey tried to land a whale; Louis searched for an office tenant and Rachel faced a fellow student.   Did you watch last week’s episode?  If you missed it we have a full & detailed Suits recap right here!

On tonight’s episode per the USA synopsis, “Mike may take a deal to reduce his sentence; Jessica and Louis have different ways of dealing with their new tenants; and Rachel represents a death-row inmate.”

Tonight’s episode of Suits kicks off with Mike in prison. Harvey pays him a visit and tells him that Cahill found a way for him to get out of prison – all he has to do is rat out his cellmate, Kevin. Mike isn’t having it, Kevin is his only friend in prison and has had his back. Mike has another plan, he thinks he found a loophole and can get Gallo paroled, that way he won’t have to worry about hiding from him anymore.

At the office, Louis is still fighting with the stock traders that they rented the offices out to. Apparently, they used his coffee mugs for their urine samples for drug tests, and Louis is not happy about it.

Rachel is working on her death row case for law school. She visited a prison inmate that has been sentenced to death for a crime he did not commit. Rachel fills Donna in on her work, she feels guilty though because since she took on the case, she hasn’t been worried about Mike as much as usual. Donna thinks it is a great thing, and she knows that Mike would want Rachel to be distracted.

Louis tracks down Donna and tells her that he wants the stock traders evicted ASAP, he’s furious that Harvey made a side deal with the traders and is letting them stay there. Donna convinces Louis that they should hire an architect and remodel the offices so that he doesn’t need to see the stock traders every day.

Mike heads back to work at the kitchen, Kevin wants to know what Harvey came to talk to him about. Mike doesn’t have the heart to tell Kevin that Harvey wanted him to rat him out. Mike tells Kevin that Harvey just stopped by to say that he couldn’t get Gallo transferred.

Harvey is running out of time, he needs to get Mike to take Cahill’s deal within the next two days or it is off the table. Meanwhile, Jessica tells Harvey that they have another situation – apparently the stock traders in the office are trying to dump the Sutter stock that they bought for Harvey. Jessica says that she will take care of it.

Mike calls Rachel later that night to check in on her. She is excited to tell him about the wrongful imprisonment case that she is working on. He agrees to help her with the case from behind the bars. Then, Mike has Rachel transfer him to Donna. Mike tells Donna that he is not taking the deal – he wants her to get Harvey to drop it.

Jessica confronts their tenant and demands to know why he dumped the stocks. He laughs that it’s how Wallstreet works. He agrees to cancel the sale if Jessica will go out to dinner with him.

Donna tells Harvey that Mike is refusing to take Cahill’s deal. Harvey doesn’t want to hear it. He wants to tell Rachel about the deal so that she can convince Mike to take it. Donna tells Harvey that is not an option and he needs to leave Rachel out of it. Harvey pays Cahill a visit, he wants Cahill to sneak in to the prison and talk to Mike himself and convince him to take the deal.

Meanwhile in prison, Mike has a meeting with Gallo. Gallo has agreed not to harm him if Mike is able to use a loophole in his case to get Gallo out of jail. The only thing is, the loophole that Mike has promised to find is a long shot.

At the office, Louis hires the architect on the spot. Pam Messer is a pretty woman, and Louis is so smitten with her, he can barely string together full sentences. Pam mentions that her office would love to sublet from Louis – it’s a shame the stock traders are already there.

Rachel pays her law professor a visit, she’s upset because she talked to Bailey and is certain that he is innocent. She found two boxes of prosecutor misconduct files at her professor’s office and she wants him to look at it ASAP.

Louis barges in to Jessica’s office and tells her that she needs to kick out the traders because he is in love with the architect. Jessica snaps at Louis that the traders are there to stay, and if he does any remodeling to the office then she is going to throw him off the roof.

Mike is in the yard at prison and playing basketball with Kevin. Suddenly he is short of breath and everything begins spinning. He drops to the ground and passes out, Kevin calls the guards for help. Of course, Harvey rushes to the prison to be by Mike’s side – he accuses Gallo of poisoning Mike in front of the entire prison. Gallo denies it, and he’s telling the truth, because Harvey and Cahill are actually the ones that orchestrate the “poisoning.”

Mike wakes up in the back of an SUV with Harvey, he’s dazed and confused. Harvey explains that he had Mike drugged, Cahill had the warden and the prison guard in on it. He got him out for a few hours to take him to see Rachel. Harvey knew that if Mike saw Rachel, then Mike would change his mind and decide to take the deal so that he could get out of prison.

Meanwhile back at the office, Jessica is still battling with the traders. She pulls some strings to get one of their capitals to tank and prove to them that she is not one to be messed with. They bury the hatchet, Jessica agrees to represent the traders as their lawyer as long as they stop harassing Louis.

Louis pays his architect Pam a visit at her office. He tells her that he has bad news, they can’t move forward with the renovations. He offers to pay her out of his own pocket for any work that she has already done. She shows him the drawings that she did of the office and the new bull pen that she was planning for him. Louis so impressed, he hires her to remodel his house so that he can still see her.

Cahill shows up at Rachel’s apartment in a huff, he wants to speak to Mike ASAP, he and Harvey get in a fight and Harvey is about to punch him in the face. Mike walks outside and interrupts, he announced that he has made a decision and he is going to take the deal and rat Kevin out so that he can get out of prison.