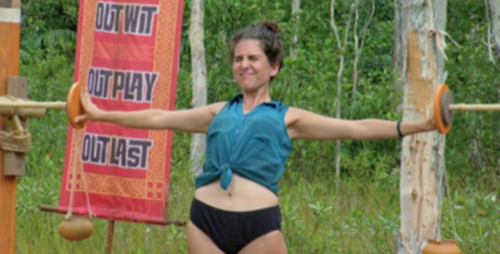 Tonight on CBS their Emmy Award-winning series Survivor Kaoh Rong airs with an all new Wednesday April 20, season 32 episode 10 called, “I’m Not Here To Make Good Friends,” and we have your weekly recap below!  Tonight, a surprising turn of events at tribal council sends shock waves through the entire tribe. Also, the castaways must choose between food, love or an advantage in the game.

On the last episode, a separation in tribes lead to the ultimate sabotage. Also, a schoolyard pick drew a line in the sand at a tough reward challenge. Did you watch the last episode? If you missed it we have a full and detailed recap, right here for you.

On tonight’s episode as per the CBS synopsis, “a surprising turn of events at tribal council sends shock waves through the entire tribe. Also, castaways must choose between food, love or an advantage in the game.”

Tonight’s season 32 episode 10 looks like they are going to be great and you won’t want to miss them, so be sure to tune in for our coverage of CBS’s Survivor: Kaoh Rong episode at 8:00 PM EST! While you wait for our recap hit the comments and let us know how excited you are about season 32.

#Survivor starts on night 24 as the survivors head back to camp. Scot, Jason and Tai talk about how they can’t believe the others ate one of their own and they didn’t have to use the idols. Tai hands Jason back his idol and they have a hug.

Jason says putting out a fire and hiding some tools caused enough chaos to break them. Tai tells Scot they should mend fences with the others and Scot says they should talk to Aubrey. Scot says he didn’t want to be the Russell Hantz of this game but then had to.

Scot talks to Aubry and says their real beef is with Cydney and they want her gone. He says if she’s on board, they can go back to normal providing food and water to the camp. Scot thinks she’s petty and small. Aubry says that’s a lot first thing in the morning.

Aubry says it was served up nicely but it was a demand. Aubry doesn’t want to work with them and is ready to make a big scary move. Now it’s time for a #RewardChallenge where they have to balance pots on a beam.

The choice is for an advantage, letters from home or food. They have to choose a reward in secret then will compete only against those who want the same reward and one will win each of the three. Tai, Cydney and Aubry chose advantage.

Scot, Jason and Michele chose the food. Julia and Joe chose love from home. They start the challenge and Joe is wobbly right away. Julia just has to beat Joe and she gets letters from home and he’s out right away so Julia is the first winner and Jeff hands her the packet of love letters.

Jason struggles and then Scot loses his balance and is out. That leaves Jason and Michele vying for food. Then a wind blows up and causes problems for Jason and Aubry. Jason loses it and Michele wins the food reward. Jeff brings the food over to her.

Now it’s Tai, Cydney and Aubry for the advantage. Cydney loses control and her pots break. Now it’s Tai and Aubry who tells Jeff she wants to prove herself. Michele pops her cold beer and enjoys it with her good 10 minutes into the competition.

Aubry and Tai both have movement. Aubry saves hers and Tai struggles. A breeze blows up and Aubry loses her balance and she’s out. Tai wins the advantage. Jeff hands Tai the advantage and says find a private spot to read it back at camp.

Scot is happy that Tai won and Cydney didn’t get food or the advantage. Back at camp, Michele is happy she beat the guys for the good. Tai goes off to read his advantage and Michele is upset since he also has an idol and says it’s scary.

The note tells Tai to go to tree mail. He opens a clue that says he won an extra vote and he can play it up until there are five people left. Tai wonders how to best use them so he doesn’t go home with that and the idol in his pocket.

Julia reads her letters from home and laughs and smiles. She says the letters from loved ones get you a boost to keep going. She cries as she reads about how they love her and are rooting for her. Julia thinks she’s ready to make big moves.

Julia, Michele and Aubry talk about Tai being a threat. Julia wants to flush an idol and says if they all vote Tai and he doesn’t play the idol, he’s gone with one in his pocket. If he does play it, they flush it and Cydney goes home.

Aubry thinks Julia is super-shady but is playing a good game. Aubry talks to Tai about the stress of the game. They talk about your heart and brain fighting. Tai likes Aubry and her energy. Aubry tells Tai that some of the girls want to flush an idol out and tells him that Julia is going for him and wants to work with him.

Aubry tells Tai that some of the girls want to flush an idol out and tells him that Julia is going for him and wants to work with him. Tai then goes to Scot and Jason and tells them about what Aubry said and that she’s a free agent. Scot says they should vote Aubry out. Tai doesn’t like this and says they are making decisions without considering what he wants.

Scot says they should vote Aubry out. Tai doesn’t like this and says they are making decisions without considering what he wants. Scot says it’s the last thing the women will expect. Tai thinks about how they make him feel like an outsider and he’s not sure what to do.

Now it’s time for the #ImmunityChallenge. Jeff takes back the necklace from Julia and explains the challenge. They have to press their hands against disks with their arms outstretched to hold by pressure.

If their arms fail, pots attached to the disk fall and break and they’re out. They are all with their arms total outstretched based on their arm span. Joe struggles right away. He loses it and is out of the immunity race.

25 minutes in and the other seven are hanging in there but are hurting. Julia slips and recovers. Scot lets go of both at once and he’s out of it. Julia struggles and is out. She says her thumbs did her in. It’s down to five.

Tai, Aubry, Cydney, Jason and Michele are in it then Tai loses it and his fall. He’s out. Michele falls out of it too. Cydney drops out and it’s Jason and Aubry. One hour and 15 minutes in and both of them are still in it but Aubry slips a little.

Jason is struggling now too but Aubry drops a moment before he does. Jason wins individual immunity. Back at camp Jason gets congratulations and the girls tell Aubry she was amazing. The vote talks and Julia tells the guys that the girls want to flush Tai’s idol.

Then Julia says they can flush that out. Scot says they’re going after Aubry and can play the super idol to save Tai. Scot tells Julia they get her playing both sides and tell her they want to do final thee with her and Julia is excited since most others hate them on the jury.

Aubry and Cydney talk about splitting Jason and Scot up. Cydney says if they can blindside Scot, that would be great. Cydney wonders if they can get Tai and Aubry says she and Tai have a connection. Aubry tells Cydney she’ll talk to him.

Later, Aubry talks to Tai and tells him about the vote against him and that she wants to take Scot out instead. She says she, Cydney, and Joe can vote against him. Tai says he’s afraid of the Scot-Jason duo. Tai wants to work with Aubry but he’s worried about not staying with the boys.

He also thinks a final three with Jason and Scot would work for him. Aubry says she knows he’s making a big move but he has three people supporting him. Tai says he’ll let her know. Aubrey tells Joe to vote for Scot and he agrees.

Scot and Jason tell Tai they can play the super idol and Jason hands his idol to Scot. Tai wonders what to do and thinks there’s no turning back after this. The jury comes in next and then Jen talks about the idol play last #TribalCouncil.

Jason talks big about the women alliance having to cut one of their own since they have it covered. Aubry says it’s hard and Scot says they asked her for a deal and she never came back to them. Jason says it’s clear what they’re doing since they told everyone what’s up.

Tai says he’s uncomfortable with boasting in his personal life but this is a game. Jason says Tai keeps stepping up for the alliance. Jeff calls for the vote. Julia votes Tai and Jason vote Aubry. Aubry votes Scot and no other votes are shown.

Tai shakes his head no and says sorry. Scot says #wow and is floored. It’s an epic blindside that breaks up the Jason and Scot power pairing. Another #blindside that takes the #superidol out of the game. Jeff says once again, you think you’re safe and it’s another blindside.