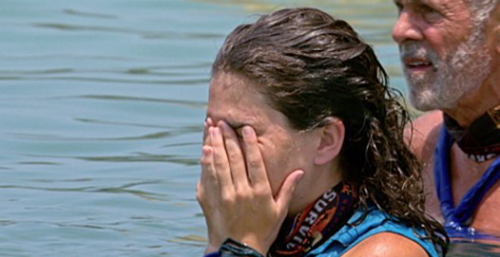 Tonight on CBS their Emmy Award-winning series Survivor Kaoh Rong airs with an all new Wednesday April 13, season 32 episode 9 called, “It’s Psychological Warfare,” and we have your weekly recap below!  Tonight, a separation in tribes leads to the ultimate sabotage; and a schoolyard pick draws a line in the sand at a tough reward challenge.

On the last episode, the merge created a power struggle between the remaining members of the brawn and beauty tribes. Also, rumors of an all-girl alliance caused problems for one castaway. Did you watch the last episode? If you missed it we have a full and detailed recap, right here for you.

On tonight’s episode as per the CBS synopsis, “a separation in tribes leads to the ultimate sabotage. Also, a schoolyard pick draws a line in the sand at a tough reward challenge.”

Tonight’s season 32 episode 9 looks like they are going to be great and you won’t want to miss them, so be sure to tune in for our live coverage of CBS’s Survivor: Kaoh Rong episodes at 8:00 PM EST! While you wait for our recap hit the comments and let us know how excited you are about season 32.

#Survivor starts with plans to make trouble. On day 23, some of the Survivors wake early before the sun. Scot is ready to engage in #sabotage and make life miserable for people. He takes the ax and machete with Jason and hide them. He’s ready to fight.

Debbie asks Jason for help with the water. She thinks Tribal was beautiful because it threw the guys for a loop and now they’re pissed off. Jason hands Scott the water instead of handing it to Debbie after she poured it. Debbie starts looking for the machete and ax.

Scot smiles. Joe wonders where they want. Joe says Michele is looking for it and it’s gone. He wonders if it’s sabotage and the women agree. Joe says it’s ridiculous Brawn would do this. Michele tells Aubry they can find a way to eat without the ax and machete.

Cydney finds the saw so that’s good. They roast a coconut and Cydney gets it open with a saw. Scot glares at them as they try to play happy. He says that makes him even madder since they’re bragging so he’s going to do something stupid.

Tai says they can’t go to extremes and says it’s hard for him to watch this but he needs the bigger picture. Scot says let’s think of other fun stuff to do. At the reward challenge, Jeff greets the tribe and brings up the blindside. He asks if it had impact at camp.

Aubry says there are missiles going and Debbie says there’s sabotage and the tools are missing and Scot poured water on the fire. Jeff asks why and Scot says he’s the one who goes to get the water and he boosts Tai into the trees to get mangoes.

They will be divided into teams of four and attached to a rope. They have to unbraid the rope, then race to use sandbags to knock blocks off a ledge. The reward is Chinese takeout delivered to camp. Jeff says they can do schoolyard or agree on teams.

One will be left out and they get to decide which team will win. If the team they pick wins, they get the reward. Tai, Jason and Scot need a girl with them. Julia says she will and Cydney is annoyed at her. Julia says she needs to pull in the guys to help her game.

Michele, Cydney, Aubrey and Debbie playing together. Joe says he bets on the girls. They start and the unbraiding begins. The women take a lead and the guys struggle a bit. Then the guys pick up the pace as Tai manages and the women slow up and get tangled.

Debbie is close to catching up then Jason steps in for the guys. Debbie keeps firing. Jason has one left and knocks it off. The men and Julia win it but it was close. Scot picks all of them up. The women aren’t happy to be left out and that Julia gets reward.

Aubry says Julia is playing both sides and she sees through her. They all head back to the camp and Jason is thrilled they won. Tai is happy to get noodles. They open their boxes of takeout and dig in. Mark the chicken is eating with them and they also got beer.

Scot is happy to talk to Julia and ask her what she wants to do. She says getting rid of them is dumb because she’s at the bottom of the girl group. Jason says think about what works best for you and Scot asks her to communicate with them.

Debbie and the others talk and then the winning group comes over. Joe says Julia is lost to the dark side but Debbie says Julia is smart and thinks she’s playing them. She thinks Julia won’t flip. Julia tells her no way would she go with them.

Cydney doesn’t believe her at all as Julia asks who they will vote for her. Cydney tells Aubrey she wants to take out Julia and Aubry agrees since Julia wants to play both sides. That night, the Joe is burning palm fronds and Tai says he woke up thinking about the guys.

He doesn’t like what Scot did to the fire but says it’s necessary. He goes and puts out the fire that Joe restarted. When the others wake they wonder who put it out and Tai plays dumb. Aubry thinks that Scot and Jason are trying to get votes because they have idols. Debbie doesn’t want to vote for Julia.

Jeff takes the immunity necklace back from Tai. This challenge is stacking blocks on a beam while stepping through trip obstacles that will knock them over. You have to align them like dominoes then send them tipping to bang a gong.

The challenge starts with the stacking and Jeff says it’s speed versus precision. They have to space them correctly plus step. Tai has to restart. Michele takes a lead with Jason and Aubry close behind. Joe and Cydney fall behind and Julia is moving slow and steady.

Jason knocks his over and then Scot does too. He’s just too big for this. Michele takes a bigger lead but Tai is catching up. Tai knocks his all over and is out of it. Michele, Debbie and Aubry are close and Julia is close as well.

Aubry knocks hers over and is out of it and then Cydney loses all of hers. Michele has what could be her last and places it. If she ha the space right, she wins. She tips hers and they fall but it fails at the end and she has to start completely over.

Debbie and Julia are close but Julia drops a couple. Jason is pressing on. Debbie is ready to tip hers. She does her first and they tumble but then hers falls short too and she has to try again. Julia is almost ready to try and Scot and Jason are back in it.

Debbie tries and they fall short. Julie’s fall perfectly and she wins individual immunity. Debbie is happy to get her necklace and Jeff says she’s the youngest and still going strong. Everyone claps but the other women are not happy clearly.

Aubry says this is the worst possible thing. Back at camp, Debbie tells her good job and says she was smart to lose them all. Debbie says they need to split between Tai and Scot and Jason will expect it to be him. She thinks none of them have an idol.

Aubry doesn’t like her telling them in front of Julia. Debbie tells them how to split it. It would be thee for Tai, three for Scot and three that the guys vote. Then Debbie says on a revote, they go for Scot. Julia goes to the guys and tells them it’s Scot and Tai.

Scot tells Julia to vote Cydney and that’s it. She agrees. Scot says if she goes with the others, they will pull out their idols. Cydney tells Aubry she doesn’t like Debbie telling Julia what’s going on. Aubry talks to Cydney about cutting Debbie loose since she’s waffling.

Aubry says she thinks Joe will go with them and Cydney says she’ll talk to Michele since Debbie will take them all down. Cydney goes to Michele who says she didn’t think she would see them go against Debbie but agrees. Aubry then goes to Joe about Debbie being too emotional.

Cydney is there too and Joe says absolutely no way will he vote for Debbie. He says there is no need since they have viable options. The girls talk and then they decide to go to Julia about voting out Debbie. Cydney goes to Julia and Aubry is worried.

Aubry doesn’t like it since she wanted Julia out. They ask Julia if she’s with them and she tells Cydney and Michele yes. They agree to target Debbie. Julia says Cydney is a huge threat and she really wants Debbie gone so she has to think about this hard.

They come into #TribalCouncil and the jury made of Neal and Nick come into the meeting. Jeff asks Debbie about the division in the tribe and she says it’s two distinct camps. She says they can’t eat because they don’t have tools. She says their lives are literally on the line. Aubry says the water on the fire was an epic moment like fajitas at a Mexican place.

Julia says at camp, the alliance was okay with her going since someone had to do it. Debbie says they’re fine and she’s glad Julia got a good meal and was brave to step up. Michele says Julia is safe and it’s a good opportunity for Julia to show where her allegiance lies.

Michele says she thinks she knows how Julia will vote. Jeff asks Tai about idols. He says based on this conversation idols may come into play. Scot says they can tell people what will happen and Jason agrees. Scot says Tai has an idol so he’s staying safe.

Tai shows it to them. Then Jason stands and says he’s got an idol too and calls it the idol’s brother. Neal and Nick are whispering as Scot and Jason high five. Jeff says it’s 100% that the idol is being played. Jason says when they come back they’re going to play idols.

Jason says they’re going to rock paper scissors who get the two idols between him, Jason and Tai after the votes are made. Michele says they have to pick their votes carefully. Scot whispers to Tai. Jeff says this one of the craziest idols ever and calls for the vote.

Jeff goes to get the votes. He calls for an idol. The guys don’t move. The women are stunned. Then Jason and Scot play rock paper scissors and then they hand the idol over to Tai instead. Everyone is stunned and then Tai sits down without playing it.

Debbie says she’s surprised the women turned on her and says this will make it harder on them to beat the men and says those three wankers made it further than her because they played a better game.