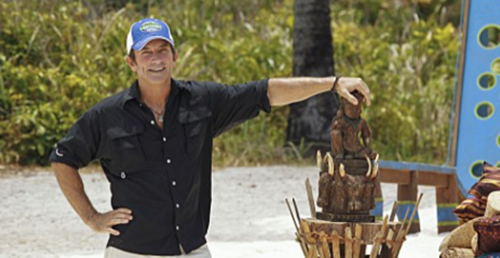 Tonight on CBS their Emmy Award-winning series Survivor Kaoh Rong airs with all new episode Wednesday April 6, season 32 episode 8 called, “The Jocks vs. The Pretty People,” and we have your weekly recap below!  Tonight, there is a power struggle and another castaway is voted out of the game.

On the last episode, a Tribe merge reshuffled the game and its alliances. Also, a brutal individual immunity challenge kept castaways on their toes. Did you watch the last episode? If you missed it we have a full and detailed recap, right here for you.

On tonight’s episode as per the CBS synopsis, “the merge creates a power struggle between the remaining members of the brawn and beauty tribes. Also, rumors of an all-girl alliance cause problems for one castaway.”

Tonight’s season 32 episode 8 looks like they are going to be great and you won’t want to miss them, so be sure to tune in for our live coverage of CBS’s Survivor: Kaoh Rong episodes at 8:00 PM EST! While you wait for our recap hit the comments and let us know how excited you are about season 32.

At the Dara tribe, Joe doesn’t feel powerful at all and wants to see what other options he has. Jason is fine, he thinks brains has to go, that is the solution. It looks like Aubry is going to be the next person to get voted out. Meanwhile, Aubry feels like she is in high school because the guys are sticking with the pretty women and she thinks it is time or the misfits to take revenge.

It is day 20, Jason decides to use his daughter’s autism to get a head in the game; he tells everyone that every red cent he has goes to their care and they live in poverty. Cydney knows that Jason opening up is going to get him ahead in the game, she needs to decide what to do to secure her own game.

Time to get to the reward challenge, they have to divide into two teams of five. On Jeff’s go, they will race out and use stepping poles on the water, to transfer one tribe member from one large platform to another. Then they will all swim out to a very large tower, first team to get all five tribe members on that tower will win reward. They are playing for ice cream.

Jeff does a school yard pick and they draw for captains. There two very different teams; Julia is one of the captains, Nick, Debbie, Scott and Tai. Aubry is also a captain with Cydney, Michelle, Joe and Jason. Julia’s team is doing well, the guys have a lot of strength. Aubry is not doing well, she is too shaky on the poles. Julia almost fell but she had a nice recovery.

Aubry’s team is still not doing well, even Michelle and Cydney gave it a try and they couldn’t do it. Julia has arrived on the platform, the first part of this challenge is done for them. Julia’s team has won, she clearly made the right choice when she choose her tribe mates to be on her team. Meanwhile, Aubry is devastated  and thinks she just keeps making bad decision after bad decision.

Time for the ice cream, there are all different flavors with cones, sprinkles, cherries, whipped cream and so much more. Jason acts like a jerk and tells the winners they can be loud if they want to, they don’t have to be quiet just because they won. Scott reveals another sob story about how his family struggled for money and that is the reason why he is on Survivor.

The guys are alone, they think Joe is asleep and start talking game because they think there is going to be an all girl alliance, but Nick doesn’t think so. Nick walks off with Julia, asks her if the women talked game today, she says no. Cydney tells the guys that Nick is talking game with Julia and they should be careful.

Jason tells Cydney that Nick was saying that there is an all girls alliance; she is so irritated. The plan is to let Aubry go, but if a guy has to go, Cydney is prepared to vote one out.

It is time for the immunity challenge. First, Nick has to give up the idol. Once again, immunity is back up for grabs. Tribe mates have to balance on a very narrow perch while holding a handle behind their head. If at any time they let go of the handle or take off a foot, they are out.

Jeff gets comfortable, it’s going to be a long challenge. Jeff tempts them with food, it will be their one and only test at temptation. Is anyone willing to step off for food? This could be a million dollar mistake. Julia drops off before the food arrives, just seconds too soon, she can’t participate. Jeff brings pizzas, brownies, drumsticks and six hot dogs with cold drinks. They have 10 seconds to decide. Jason, Scott, Joe and Michelle get off and take the food temptation.

Debbie falls down, she joins Julia and does not participate in the temptation. Aubry is down next, with Nick after her. Nick tells Jeff at tribal council it is going to be between Aubry and Debbie. It is between Tai and Cydney, Tai says he is like a bamboo – he will keep going.

Forty minutes have passed, Tai appears to be in pain and tells Jeff he is just doing one second at a time. Cydney drops, unbelievable turn of events! Jeff says he has never seen anything like this happen before. Tai has won individual immunity.

Back at the Dara camp, everyone congratulates Tai who is talking to his chicken. Nick things the vote is going to be split between Aubry and Debbie. Meanwhile, the women want to take Nick out and Debbie is in, so is Aubry and Cydney. Michelle is not on board with letting Nick go, she thinks she can still use him for a while longer.

Time for tribal council. It is Nick and Michelle’s first time at tribal council, they light a torch. Neal is called in, the first member of the jury; he was pulled from the game, but deemed well enough to join them this evening. Debbie says that Braun and Beauty have merged; Brains are on the outs. Tai reveals that there may be a super idol and some of the tribe mates are surprised, they didn’t know about it.

Time to vote. Nobody plays an immunity idol. First vote is Aubry, then Debbie, Nick, Aubry, Jason, Nick, Nick, Nick, Nick. The person voted out is Nick, he is the second person on the jury. The women have turned the game!