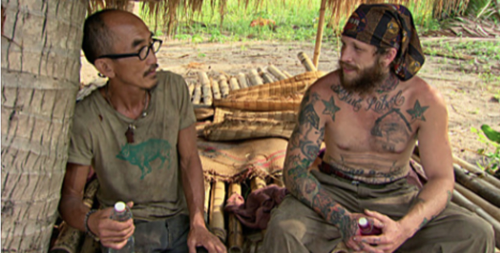 Tonight on CBS their Emmy Award-winning series Survivor Kaoh Rong airs with an all new Wednesday April 27, season 32 episode 11 called, “It’s ‘Me’ Game, Not a ‘We’ Game,” and we have your weekly recap below!  Tonight, one castaway holds the key to individual immunity and guarantees themselves a shot at the final six.

On the last episode, a surprising turn of events at tribal council sent shock waves through the entire tribe. Did you watch the last episode? If you missed it we have a full and detailed recap, right here for you.

On tonight’s episode as per the CBS synopsis, “one castaway holds the key to individual immunity and guarantees themselves a shot at the final six. Also, after a shocking tribal council, a fractured alliance may not be able to.”

Tonight’s season 32 episode 11 looks like they are going to be great and you won’t want to miss them, so be sure to tune in for our coverage of CBS’s Survivor: Kaoh Rong episode at 8:00 PM EST! While you wait for our recap hit the comments and let us know how excited you are about season 32.

#Survivor starts with the tribe heading back after Scot’s ousting on night 27. Tai tells them it’s a game and Joe says that was excellent. Aubry says she’s so happy and they hug. Tai says Scot and Jason always talked over him and he had to get control over his own game.

Jason tells the others they will never get rid of Tai now and tells Cydney good job and says it was good game play but he hates it. Jason says that was the one thing that could go wrong and it went wrong. Jason is upset that he lost his partner and an idol.

Jason says he’s an island now and tells Cydney if she wants to do something let me know. Julia is upset but Tai reminds her she wrote his name down. Julia is upset that Aubry, Joe, Tai and Cydney formed a secret alliance. Tai offers to explain to Julia why he voted Scot.

She says she doesn’t want to hear it. Julia, Michele and Jason talk about how they’re on the bottom. Aubry is thrilled that Scot is gone and says this changed the dynamic of the game. Tai tells Cydney and Aubry no more blindsides.

Next morning, Jason glares at Tai who reminds himself that Survivor is a game and he hates that he had to do this betrayal and talks to Jason. Tai asks him to hear him out and says that was the hardest thing he ever did. He says he and Scot were tight and they might cut him loose.

Tai says he had to make the first move. He says it was a game move. Jason says he understands why he did it. Tai says he was worried that Jason would be so made he would come back and wring the neck of #MarkTheChicken.

Jason says he can’t let Tai and the others see how angry he is and he wants revenge. He’s upset that Tai has an idol and he doesn’t. Jason is determined to now screw Tai over. The tribe arrives for the #RewardChallenge and Jeff greets them.

They have to race through obstacles and collect three rings then throw them onto a swinging hook. The winner will get a helicopter ride around the island and then get a fried chicken picnic. Jeff says they will run this in pairs based on a random draw.

One person won’t get to play. They draw and it’s Joe and Tai, Julia with Aubry, Michele with Cydney, and Jason sits out. Cydney and Michele get their first ring then Tai and Joe and Julia and Aubry are last. Tai and Joe fall to last.

The last ring is up really high and the other teams catch up. Aubry and Julia take the lead. Tai gets theirs and Cydney gets their ring. All three teams have the rings now and they have to throw. Now they’re throwing. Cydney gets one ring.

Joe lands a ring. Cydney gets a second and so does Joe and ties it up. Joe misses and Cydney throws and lands it and she and Michele win it. Jeff then says they have a decision. They get to pick one person to join them and it can be anyone even Jason.

Michele and Cydney whisper for just a moment and they bring Aubry along since she hasn’t gotten to eat at a challenge yet. Jason isn’t pleased but can’t be surprised. The chopper shows up to pick up the three girls. Michele is happy they can strategize.

Cydney says they have a beauty, brawn and brain together. Aubry is excited to be along. They get dropped off at the beach and pour wine and dig into their food. Michele says she wants this to work and Aubry says she trusts her.

They also get some rest time in hammocks after they eat. Cydney whispers to Aubry what she thinks and they agree she’s a good option and they talk about how they can’t go to final three with Tai and Joe or Michele is better.

The three girls come back from reward and Jason asks Cyd if she’s thinking of something crazy and they ask her about getting Tai out. Jason says if Tai goes, all of the idols are out of the game. Cydney says it makes sense for her.

Julia says a true fan of this game knows you have to make big moves and blindsiding him could change the game and she says as soon as Tai is gone, they’re going to eat Mark. Next up is the #ImmunityChallege. They have to swim to a raft, memorize numbers to get a combination.

Cydney heads back first followed by Jason. Michele and Julia leave next then Aubry. Tai and Joe head back last. They have to go back over the obstacle again and they‘re already tiring. Tai and Michele write numbers in the sand. They need five numbers to solve it.

Aubrey and Cydney head back out with Tai. Joe finally comes back in. Julia and Jason untie a key but it could be the wrong one. Jason tries his lock and so does Julia. Jason has to head back. Julia got it and has her puzzle pieces.

Joe decides to sit it out since he’s worn out. Michele gets her box open and they are both working the puzzle. Aubry and Jason swim back. Michele knows what it is and moves her tiles and spells out blindsided to win individual immunity. Julia and Joe hug her.

Jeff gives Michele her necklace and congratulates her. He asks how many numbers she memorized and she says all of them. Jeff is impressed. Jason is upset that he wasn’t even close and hopes the others will vote with him to take out Tai.

Aubry says Jason is polarizing for the jury and doesn’t think he can win it. She says Julia is well-rounded and has no blood on her hands. They decide on Julia. Michele isn’t happy about that and doesn’t say anything. She says she trusts Julia.

Cydney tells Michele if Jason and Julia ask, tell them the Tai thing. That gets Tai’s attention and now he’s worried. Tai plans to bring his idol and says he doesn’t want to go home with one in his pocket. Julia talks to Michele and says Tai can win this.

Michele now thinks she might vote with them against Tai if they also have Cydney. Julia says they need to get rid of Tai and Michele says she hopes Cydney is with them. Cydney and Jason talk and she says they’re going with the Tai thing.

Julia tells Jason that they may be able to send Tai home with an idol in his pocket. Jason is still upset about Scot walking out with his idol and kvetches about it. Michele hopes it works out with Tai and says she’ll decide at Tribal what to do.

They head out to #TribalCouncil. The jury comes in – it’s Neal, Nick, Debbie, and Scot last time. Jeff talks to Julia first and she says this is a crucial point in the game. She says Michele is the only person who can feel 100% safe tonight. Jason agrees.

He says everything that comes out of your mouth is remembered. Julia says she thinks Michele and Cydney are on the bottom of the five and Aubry is holding Joe’s hand to the end and Tai has the potential to win this.

Tai says because he has an idol and secret advantage, it’s nerve wracking and he wants to remind his alliance why shake the boat. Aubry says it’s scary but you have to rely on your relationships and trust that. Jason says he trusted his alliance and Scot is out.

He says Tai flipped like a flapjack twice on his alliance and it will happen a third time. Tai says Jason and Scot were in control and tight. Jason says Aubry and Joe are even closer and Tai is with them now. Michele says you have to think ahead in this game and make moves so your game is respected.

She says at the end, you have to have something to say. Cydney says you want the jury to respect you and want them to not see you throwing everyone under the bus. Jason says everyone here has to justify why them to everyone on the jury how they outwit, outplay and outlast.

Jason goes to vote first and writes down Tai’s name. Aubry writes down Julia’s name and says she won’t cross it out this time. Jeff goes to count the votes and comes back and does the idol call. Tai whispers to Aubry and asks if he should play his idol.

She says she thinks he’s safe but it’s up to him. Tai doesn’t play his idol. The votes are: Tai, Julia, Tai, Julia, Julia, Julia. Michele hugs her as she stands to go take her torch to Jeff. Scot looks angry and Jason frustrated. Jeff snuffs it and Julia is sent out.

Michele is crying and Jeff says no one came into Tribal confident and fear entered the game. He says when fear is in control, anything can happen. Julia says she’s bummed but is proud of the way she played as one of the youngest players ever.