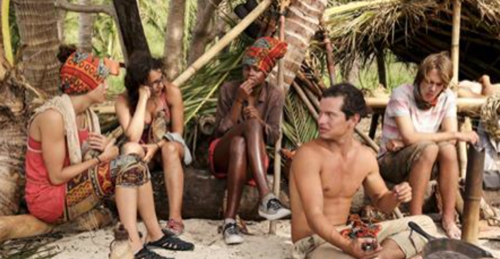 On tonight’s Survivor season 33 premiere episode as per the CBS synopsis, “Castaways get a chance to mingle with the “enemy,” and balance and precision are tested at a tough immunity challenge,

#Survivors starts after the last Tribal Council when Mari was sent home. Zeke is annoyed with Hannah and tells her he doesn’t want to talk and just give him some space. Hannah presses and Zeke says just go and let me breathe.

Hannah won’t shut up and go away and keeps on. She gets snarky and bickers with Adam who is also telling her to leave them alone. Zeke snaps and says don’t play the victim. Zeke and Adam talk about how they need to chill but they were both fooled.

Adam says he’s on dumba** island. He’s not happy they were blindsided and are on the bottom. Over at Gen-X, David talks to CeCe and Ken because they know they’re on the bottom. He’s happy about his idol find and they talk about how nice the weather is.

Paul feels good after his health scare and decides to go fishing. Paul catches nothing and says he got close but the waves pulled him back. Ken listens to him talking about the yellowtail. Ken thinks that Paul says stuff and never follows through.

Ken says David is scared of everything but Paul offers nothing at all to the tribe. Ken wonders how he ended up on the bottom and Paul at the top. Over at the Millennial camp, Adam comes back with tree mail and says they have to draw rocks to send four people to get info.

Will says it’s the orange rocks – this will send them to mingle with the other tribe. They reveal the rocks. Will, Jay, Taylor and Figgy are all going. Taylor is thrilled most of his alliance is going along. A boat comes to get them and Jay is happy to head out, too.

Meeting of the tribal reps

Jay hopes that Taylor and Figgy don’t embarrass them by revealing they’re a couple. David, Chris, Paul, and CeCe are chosen for the Gen-xers. It’s the #SurvivorSummit. They are treated to a lunch of PB&J sandwiches and the Millennials tell them about Mari’s blindside.

Paul asks if they have any showmances and the Millennials lie and say no. Paul tells them he’s in a band and tries to impress them. He thinks they appreciate the chance getting to talk to him. Paul then tells them about David being a chicken and screaming about everything.

David thinks later that Paul just wants an audience and is so annoying. David decides to make friends in case of the merge so he can ditch Paul. Figgy asks CeCe and David about Ken and they talk him up and tell Taylor and Figgy that he’s great.

They tell them that Paul is at the top. They talk about idols and who’s in charge. CeCe says Paul tries to be in charge. CeCe thinks how dumb they were to leave them alone to talk to them. David makes a pitch for an alliance later with Taylor. They all go to swim and chat.

The groups head back to their camps. They are grilled about what went down and who they met. David is pleased to get to talk to them and CeCe tells Ken that the girls were asking about #KenDoll. Ken says it’s not fun to be called a plastic doll with no penis.

Ken says he’s hungry and goes to fish. He snags a fish and thinks that Paul came back empty handed after bragging. He thinks Paul is an incompetent leader and they need someone who does what they say. Ken talks to Jessica about how Paul is out for himself.

Ken says Paul is rubbing people the wrong way but Jessica is in an alliance of six with Paul so she won’t do it no matter what she says to him. She’s just intent on getting to say 36 to reveal her legacy advantage. Over with the Millennials, the tribe talks.

Taylor says it’s great since he has Figgy, Adam and Michelle. They plan to target Zeke next. Adam looks at them talking and is stunned that Figgy is still there since she sucks at the game. Adam hopes to send her home to shift the tribe in his favor.

Adam goes to talk to Michaela and Hannah about how that alliance of four is too strong and they need to vote out Taylor or Figgy. Michaela thinks about what he says since she doesn’t like Figgy either and decides to watch, think and see what she wants to do.

The tribes show up for the #ImmunityChallenge and Jeff takes the idol back from the Gen-xers. They must carry heavy backs through obstacles and then pull out sandbags to use to knock down puzzle pieces and then reassemble the puzzle.

There’s also a reward – it’s comfort in the form of two chairs, a hammock, pillows, blankets, and candles. Losers face tribal as usual. They are off and running with the heavy bags of more than 40#. Gen-x falls behind. Millennials are first to the balance beam.

Will drops and has to go back and Gen-x takes the lead. Figgy makes it across and Taylor is behind her. CeCe is going slow for Gen-x. The Millennials take the lead while CeCe moves slowly. Michaela is up next and makes it. CeCe is finally across.

Taylor does another run to give the Millennials a lead but Lucy falls and has to restart but throws her bag. Will makes it and Adam is last for the Millennials. They are through and start opening their bags to retrieve their sandbags.

Paul is on the balance beam for Gen-x and falls off. Chris goes again and makes it. Paul goes across with no bag and Chris takes another bag. Millennials start throwing bags. Jay is throwing for the Millennials. Gen-x finally starts throwing with Ken.

The Millennials are down to the base level. Ken is smoking this. Jay has two left. He gets them and Zeke and Michelle run to work on the puzzle. Gen-x is catching up thanks to Ken. Ken gets the last and Sunday and David attack the puzzle for Gen-x.

Now it’s a puzzle race. Millennials are getting help from the onlookers and are doing well. Gen0x stays quiet and lets their people work. Millennials slide the last piece in and take the immunity win. Gen-x will head back to Tribal tonight.

They are happy to get their comfort but ask Jeff if they can swap fishing equipment for comfort. Jeff says they need to convince Gen-x. Ken says the group decided no, they have to keep the comfort. Michaela says it makes sense, but if they were their parents, they would have said yes.

Paul has decided that CeCe should go home since she cost them the challenge. He thinks everyone is on board. The alliance of six talk about how terrible CeCe is in challenges. Sunday talks to Chris and Brad about this and they all seem to agree CeCe needs to go.

Sunday says keeping the tribe strong makes sense and she can’t argue the logic of it. CeCe asks some of the girls about the vote and Jessica and Sunday says the guys are working out the details. CeCe knows she’s in trouble since none of them talk to her.

David talks to Ken and wonders if they can put a target on Paul instead. David talks to CeCe and says they have nothing to lose. There are three that will vote for Paul. David has his immunity idol just in case. He wishes others would see that Paul is useless.

Paul talks to Jessica and Sunday to confirm that they are targeting CeCe. Jessica asks if they’re doing a boys thing and he says he would tell her that they were on their own. Jessica goes back to Lucy and tells her that the girls are on the bottom of the group of six.

They head to Tribal Council. Jeff asks David about the summit. David says he saw the Millennials as peers and there was mutual respect. Jeff asks why he’s less nervous and David says being there is making him cope with his anxiety and it’s tearing down walls.

Jeff digs into the alliance

Jeff talks to CeCe who says no one would talk to her and she still feels unsafe. She says she and David and maybe Ken are at the bottom. Jeff asks Chris about a large six alliance. Chris says it’s too early to think about splitting an alliance.

Sunday says Millennials are more open to trying other thinks. Jeff asks which of them text. He asks if they spell out “you” or use “u.” They all use you. Jeff says Millennials would tell you things change and it’s more efficient.

Will the blindside happen?

Ken says that language is beautiful and it’s nice to appreciate it. Jeff teases him and asks if he likes vinyl. He does. Paul seems smug and says that the people in the six aren’t paranoid. Chris glares over at him as Paul says we’re here to play, not camp.

Ken says there has bene chatter but he has good work ethic and he’s an asset to the tribe but he could be wrong. CeCe says she has 10% of surviving this. Jessica says they need to focus on winning the next challenge and that takes more than just the six in the alliance.

Paul is the next #Blindside! He’s out of there!

Chris is absolutely stunned. Paul started to sweat after it hit vote four. He wishes them luck and then leaves. Bret is also stunned since he and Chris and Paul are the only ones that didn’t know.

Paul says he was totally blindsided and is trying to figure out who sent him out. He says it’s a great experience and is one of the best times he’s had in his life.