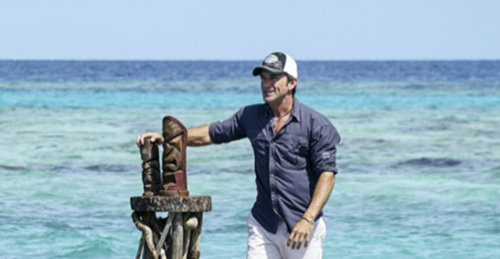 Tonight on CBS their Emmy Award-winning series Survivor: Millennials vs. Gen X airs with an all-new Wednesday, November 2, 2016, episode and we have your Survivor: Millennials vs. Gen X recap below.  On tonight’s Survivor Season 33 episode 7 called, “I Will Destroy You,” a castaway feels the heat when they’re interrogated about their true profession.

On tonight’s Survivor season 33 episode 6 episode as per the CBS synopsis, “Two millennials attempt to mend their relationship and work together; another castaway feels the heat when they are interrogated about their true profession.”

#Survivor starts on night 18 back at Takali after Figgy’s blindside. Taylor is upset and thinks they betrayed him. Adam asks to explain things to him and they go sit and talk. Taylor says camp is gray without her. Adam tells him he was in a lose-lose situation and he chose the least bad option.

Over at Vanua, David chats with Zeke and Michelle. David worries that Chris might come after him and he’s happy that he and Zeke are in sync. David decides to show Zeke his idol to build some trust. David says please don’t tell anyone else and admits he found it the next day.

Zeke says he won’t tell anyone and it won’t benefit him to do it. David wants to make a final deal to go to the end with Zeke. He assures David he’s trustworthy. At the beach, there’s a new #RewardChallenge ready for the survivors. The three tribes troop in.

The other tribes are stunned that Figgy went home. Michaela smiles – she’s happy about it. She says she said it’s been time for a while for Figgy to go home and says Bye Felicia. For the challenge, they have to lift and hold someone to untie balls then do three tasks with the balls.

The first tribe gets a chef to come to camp and cook protein for them, salads and cheesecake. The second-place tribe gets kabobs they cook themselves. Ikabula sits out Brett and Sunday. The challenge starts and it’s part water, part sand based.

Race for reward is on

The tribes hoist Zeke, Jay and Adam. Zeke falls and then they try David up top. Jay gets all the balls loose and then Adam does too. David struggles and falls behind because he’s uncoordinated. David finally gets it. Ikabula is in the lead and they untie their balls first.

Ken lands his next one too. Chris misses and Jay finally gets his second. Ken misses and Chris scores again. Vanua has three. They move on. Takali lands its last one too. Ikabula falls behind. Chris balances the first ball on the ledge they need.

A race for second

Chris lands a second and has one left. Jay hits with the second but they are way behind. Ken balances the first for them. Chris lands the third and wins the chef reward for Vanua. Michaela shoots for Ikabula and lands one while Ken works on the second.

Michaela ties it up. Michaela pulls it out and beats Ken by one ball. They came from way behind. Vanua heads back to await their chef and Ikabula takes home their kabobs to camp. Takali heads home empty handed despite a strong start.

Michaela is happy they have food but worries the tribe might come after her because she’s showed how strong she is. Vanua comes back and finds the chef already there. They are all so happy. David says this is restaurant quality food that he’d get in LA.

A feast at Vanua

Zeke says he’s always been on a diet but out here he can eat and eat. Zeke says his inner fat kid is bingeing. Chris says the guys are eating like animals with their fingers while Michelle is eating with silverware. Then the guys all start belching and farting – Michelle is grossed out.

Michelle says her mom raised her better. Over at Takali, Ken talks about life back home being run by policy. Taylor says lots of Gen Xers don’t care but he says later he hates talking politics. He says that’s not where he puts his hope.

Taylor says his generation will change things drastically and says the electoral votes are useless. Jessica says Taylor might not be the brightest but he’s honest. Jessica asks Taylor if Adam betrayed him and he says Adam did make promises to Taylor and Figgy.

Deals made – revenge in mind

Taylor tells Ken and Jessica he will never write down their names and shakes their hands. Jessica thinks Taylor has no sense of strategy so he might be more trustworthy than Adam who can think strategically. Over at Ikabula, they eat and talk.

Michaela says to the camera she’s the strongest girl on the tribe and knows she’s an intense person. They eat and talk about the day. Hannah says they’re trying to stay united so they can keep winning. Hannah isn’t sure about Bret and thinks he’s lying about being a funeral director.

Bret is a cop in real life – Hannah is right that he’s fibbing. He says cops don’t do well on Survivor. Later, Hannah tells Jay she thinks he’s a cop and says she grew up in Boston and says he talks and walks like a cop. Hannah tells Michaela that too.

Will advises Hannah not to force Bret’s hand and to let him admit it on his own. Jay agrees that he’s a cop too and says he sounds like cops back home in Florida without the accent. Jay says he doesn’t have a funeral director personality and the lies matter.

It’s time for the #ImmunityChallenge and Jeff greets the three tribes for the challenge. Jeff takes back the idols from Vanua and Ikabula. They must throw coconuts into a net that drops a flag with a combination that unlocks a slingshot.

Then you fire sandbags at targets with the slingshot. Ikabula sits out Hannah and Will. Chris is the first to land one and Michaela does too. Taylor lands one. Zeke misses but Sunday gets one. David misses of course. Vanua is struggling.

Takali and Ikabula are doing well and Vanua lags a bit. David masters the granny shot and does better. Adam is on fire. Ken lands another. Taylor lands the last one and Adam starts working the combination. Adam gets the lock to release their slingshot.

Ikabula’s numbers drop and Michaela goes to try the combination. Taylor fires the slingshot and misses. Michaela has the lock and Ikabula runs for their slingshot. Vanua is lagging badly but they finally get theirs too. Michelle works on their lock and struggles.

Bret misses. Ken starts firing for his tribe. Michelle keeps trying. Ken scores for Takali. Michaeal won’t switch out and keeps missing. She finally stops and Jay steps up Ken lands another. Michelle finally gets the lock for Vanua’s slingshot.

Race for second after Takali takes it

Taylor gets the third for Takali and Ikabula still hasn’t scored. Chris lands one for Vanua. Jay scores for Ikabula as Ken scores again to make four Takali has one left and Ken fires again and wins it. Takali wins immunity.

Zeke scores for Vanua. Bret scores for Ikabula. They each have three left. Chris lands another for Vanua. Michaela swaps back in and Chris scores another and Vanua has one left. Michaela misses again. Chris shoots for the win and nails it. Vanua also wins immunity.

Ikabula will go to Tribal for the first time tonight. Jeff hands out the immunity statues to Vanua and Takali. He tells Ikabula they will face him tonight at Tribal and sends the other two tribes back to camp.

Target is on Bret

Back at Ikabula, they all sit brooding. Jay wants to send Bret home since he’s a liar. Bret and Sunday know one of them will be sent home since they are outnumbered. Bret tells her they have to write down each other’s names based on this unless something else turns up.

Michaela shows the other three the split of Gen X among the other tribes. She says it doesn’t matter who they keep. They talk about targeting Bret then splitting the votes in case there’s an idol. They agree that if there’s a tie, they will all vote Bret.

Jay camera talks later and says the problem is that Michaela is smart. Jay says she’s a huge threat since she’s a comp beast and really smart. He thinks they should send her home. Jay proposes this to Will and says she’s too smart to keep.

Michaela on the bubble

Jay says the good thing is Michaela is their only alliance and they discuss that they can’t tell Hannah because she’ll freak out. They head over to #TribalCouncil and Jeff greets them. Michaela tells Jeff that sketchy people can’t be relied on but most people here can be.

Jay says he’s surprised the majority took out one of their own and it makes them wonder why Millennials and Gen X are starting their own. Sunday says they all just say lined up not talking for quite a while. Jeff asks what Michaela was thinking.

Will the Gen X alliance splinter?

She says they all like each other and are tight and could have taken over the game if Jeff let them go to the merge together. Jeff laughs and says everyone blames him. Sunday says the other four have tried to be very inclusive.

Bret says the other four know him and know he’s being genuine with them. Jay rolls his eyes. Will says playing crazy is dangerous and says trust is a rare commodity you should latch onto. Jay says you have to follow your gut since it’s all you’ve got.

Michaela says the merge is coming soon and who can make it to five with us. Will says they will have five strong trustworthy people after this vote. Jay agrees and says bonds will grow from that. Michaela says the tribe will be stronger.

Michaela says she hopes the one that stays doesn’t feel like they’re at the bottom. Jay looks stressed. Jeff calls for the vote. Hannah votes Bret. No other votes are shown. Jeff goes to count the votes and comes back and calls for idols.

Hannah says what? Bret smiles. Michaela is very upset and she tells Jay he’s going to feel like an a**shole. She curses him and says he f-d up something good. She storms out while Hannah’s jaw hangs open. She puts her head in her hands.

Jeff says they one that preached trust the most got blindsided. Michaela says in her confessional that she’s pissed off and it was dumb. She says they could have ran this thing together. Turns out, both Sunday and Bret voted against Michaela so they were pulled into the plot.

Next episode, it’s the merge and Gen X is outnumbered. Stay tuned to CDL for a LIVE recap of every episode of Survivor all season long!