Survivor: Millennials vs. Gen X Recap – Zeke Evicted With an Idol: Season 33 Episode 12 “About to Have a Rumble” 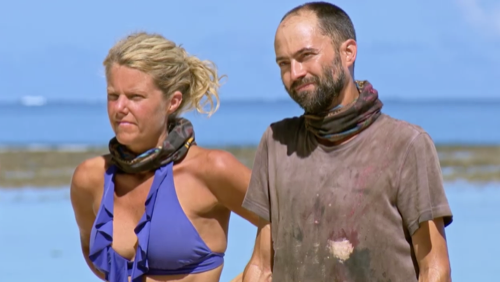 On tonight’s Survivor season 33 episode 12 episode as per the CBS synopsis, “Castaways receive a much-needed reward in the form of love, and one castaway works hard to build their resumé in the game.  At the end of the evening another castaway is sent to the jury.”

#Survivor starts after Tribal Council and the rock draw that sent Jessica out of the game. David tells Hannah they all made a choice. David is mad that he burned his idol for no reason and is with Hannah, Ken and Adam and they are against five.

Zeke is happy about Tribal and says he loved it. Bret says David misplayed. Zeke feels like he’s got a shot at final five. Ken finds out that he has the Legacy Advantage. He says he’s happy that Jessica did what she said and left it to him. Day 36, he’ll find out what it is.

Now they head to the beach for what they think is a standard reward challenge. Jeff says Day 31 is a perfect time for love and everyone is thrilled. Sunday’s husband comes out and she hugs him tight. She cries and says this makes her feel like she’s not alone.

Bret’s dad is there and his dad tells him he’s a hunk. Bret’s crying too. Jay’s sister is there and he’s full bawling. He says she’s half of his heart and his mom is the other half. Everyone is crying now. Hannah’s mom is there.

Hannah’s mom bawls and she hugs her. Hannah says her mom is a hero and beat cancer and that sets Adam to crying hard. His brother Evan is there and they’re both crying. Adam doesn’t know what’s going on with his mom’s cancer and his brother whispers “she’s okay.”

David says his dad is fearless and he wants to be like that. Ken’s brother is there. Hannah and Zeke agree that both brothers are so handsome Ken says he wanted to be his brother when he grew up. Zeke’s dad comes out next. His dad says Zeke is his hero.

Will’s mom is there and she’s crying and says he’s so amazing. She says she would go anywhere for his smile. Jeff tells them they now face the challenge. They must race through obstacles tethered on a rope. The winner gets a barbecue at camp with their loved one.

The rope tangles start immediately and Ken and Jay take an early lead. Zeke is third and then Hannah. Sunday falls far behind and so does Will. David is back in it. Ken gets stuck under a beam. Adam is stuck too. Jay takes the lead.

Zeke is right behind Jay. Ken finally gets loose. Hannah gets loose too. Adam is still stuck but David gets through. Jay wins it. They are all tired, dirty, and exhausted. Jay and his mom get the barbecue. He tells Jay to pick another survivor.

Jay tells them he respects them all but made a promise to Will long ago so he chooses him. Jeff tells him to pick one more. Jay also picks Sunday. He tells the others that he’s really sorry. Jeff then says one more and Jay is torn.

Jay says he and Adam have been brawling this whole time but he didn’t use his advantage against them so he’s going to choose him. Both Adam and his brother hug Jay and thank him. They all head back to camp except the loved ones that had to leave.

Adam gets an update

Jay says when Adam declared he wouldn’t steal the family visit, he truly respected it and that’s why he chose him. Later, Adam and his brother talk and he tells him that their mom was having side effects to some of the meds and had to stop them.

He says it’s worse and they took her on a break from the treatment to let her regain her strength. He says she’s been better in the two weeks since they stopped treatment, but she’s not getting treatment. Evan says the whole family loves Survivor so they’re happy he’s living his dream there.

Evan says their mom told him to tell him she’s getting a lot of strength from her. Adam says he wants to use this as inspiration to keep fighting. Evan and Adam thank Jay and Adam says it meant a lot and he will never forget it. He gives Jay his advantage.

An offer from Will

Adam says no strings attached and hands it to him. Adam says the stakes for him are higher for anyone who has played this game and it’s about more than the money. It’s day 33 and David notices a meeting on the beach. He points it out to Will.

Will says it’s risky but he’s not going to be a goat. Adam gives thumbs up to it too. David is excited and hopes they can send Zeke home tonight.

Jeff takes back the necklace from Jay. This is the one where you hold two handles with a heavy bar and if you drop, it breaks a tile. David, Hannah, Will and Bret fall out fast. Sunday falls out too. Zeke’s falls. There are three – Adam, Jay, and Ken.

It’s been just four minutes and the three are still there. Ken’s bar slips and so does Jay’s. Ken drops and he’s out. Now it’s Jay and Adam. Jay drops and Adam wins individual immunity. Jeff gives him the necklace and tells the others he’ll see them tonight at #Tribal.

Back at camp, everyone congratulates Adam. He also has the hidden immunity idol. David talks to Hannah and Adam and says let’s all vote Zeke no matter what anyone else says. Jay asks why David is so calm and wonders what’s up.

Zeke says they are too calm and assumes that David has another idol. He plans to throw someone else under the bus. Zeke suggests they go for Ken and the others agree. They tell Will too and he agrees Ken talks to Will later and he asks how he feels.

Will says the other group doesn’t respect him. Ken says he needs to know if Will has integrity. Ken says he wants to win for his little girl. Will says he’ll vote Zeke because he can beat any of them. Ken says he has one chance to believe him.

Will thinks this conversation is excruciating but says he has to deal with this crap to make a big move. Will tells Ken that they’re going for him tonight. Ken says he doesn’t understand that. He’s pissed. Ken asks Jay to help him get some driftwood.

Will panics and says there’s about to be a rumble. Ken says Will told him they were voting for him. Will says you’re blowing up my game. Will says he makes moves and others take credit. The others are upset that he revealed the plan to “test” Will.

Will says he’s done with this and wants Ken done tonight. He says this guy preached nobility and integrity and then pulled this. Hannah and Adam tell him he screwed up and now Will won’t vote with them. The other group decides to target Hannah since they’re expecting Ken.

It’s time for Tribal and the jury comes in and takes their seats. Jeff asks if they’re still locked in two sides against each other. David says there are and one swing vote. Sunday says Bret, Jay, Zeke and herself are on one side and Will is in between.

Will says he wanted to flip on Zeke but Ken told the whole tribe the plan so everyone knows what’s going on. Jeff says the youngest kid gets to make the big decision. Sunday says Will wants to play hard and doesn’t want to feel like he’s with the big kids.

That makes Will snap and he says everyone treats him like a kid and that’s the problem. He says he is a serious contended and this is insane. Zeke says he wanted to play with Will and they aligned and he protected him before.

Adam says Zeke is saying he protected him and Zeke says Will has saved him too. Jay says he never looked down on Will and talked to him like an equal and didn’t try to take credit when they took out Michaela together.

David says Will wants something on his resume and Jay is trying to hand that to him. David says this vote will have Will’s name on it. Bret says they will build you up and vote you out. Adam says our side has an equal partnership in how moves are made.

He saw Will can have an equal say. Will says when there are five people, they will fight. Hannah says there has been a lot of fluffing Will up by the other side. Jay says go with your gut, I won’t fluff you. Will says Jay is the one who has showed him respect.

That’s enough to send Zeke out of the game. Zeke tells them it’s been an honor to play with them. Jeff says big moves are great until you’re the one that gets punished. He says everyone needs to have their gloves up.

Zeke says he went after David too early. The votes show that Will stuck with them and voted Zeke. He says he came to throw punches and says they were playing at a high level.