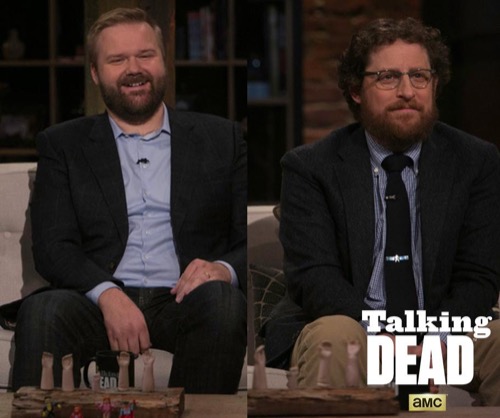 Tonight on AMC Talking Dead returns with an all new Sunday April 3, season 6 finale and we have your weekly recap below. On tonight’s episode, guests talk about the “Last Day on Earth” episode of “The Walking Dead.”

On the last episode of the Talking Dead, host Chris Hardwick sat down with Sonequa Martin-Green (Sasha), Co-Executive Producer Denise Huth and Yvette Nicole Brown discussed the episode “East” from The Walking Dead. Did you watch the last episode? If you missed it, we have a full and detailed recap right here for you.

#TalkingDead tonight has Robert Kirkman, Scott Gimple, Norman Reedus and #Negan himself Jeffrey Dean Morgan. Chris Hardwick is holding Lucille as it starts! Jeffrey says waiting for tonight has been like a long audition waiting for 20 million people to judge him.

Chris says when he heard Jeffrey was being cast as Negan, he loved it and says he was so great as the Comedian in Watchmen. Chris asks how it felt to swing Lucille and Jeffrey says holding her made him Negan.

Chris reads reactions about how fine Negan is and one says he’s not likable. One says he’s amazing and he’s badass. Chris says this is a beloved character and people are thrilled. Norman says he thinks Daryl is being taken to his death and doesn’t realize they’re all there.

Chris asks how this compares with the other bad guys. Norman says he’s known Jeffrey together and is such a nice guy but plays such a dick and Jeffrey hugs on him. Norman says Scott said it best – Negan is the star of his own movie – he kills without any feelings.

Norman says Negan does it with a smile on his face. Chris tells Scott Gimple this has been a phenomenal B season. Chris says he’s been stressed then asks why they didn’t reveal who was attacked. Scott says that was the end of the story. He says who died will start the new season.

Chris says someone definitely dies and Scott agrees. Chris says he watched several times trying to figure out the angle and who it is but Scott says they jumped around but he knew people would Zabruder it. Then he says it happens in issue 100 of the comics and it’s a big moment.

We see an interview with Lauren Coahn about Jeffrey joining the cast and says she would like it all to be okay when they come back next year and says none of them know what happens. Back to the set and we hear whistling.

Norman says that scene was rough and says sometimes the caliber of an actor fits really well. He says he looked at Andy who was full snot and Steven’s leg was ripped up and says Jeffrey brought it on day one. Scott says it was even better than he wrote it with the energy on set.

He says the cast was crying and shaking for about 15 hours when they shot this and Scott says he felt bad about it. He says Jeffrey was doing a performance in front of people who were terrified of him. Jeffrey says it was cold as hell and an all-night shoot.

He says they spent 15 hours on set and they were acting even when the camera wasn’t on them. Scott says on most shoots, they would use stand ins but they used the whole cast. Jeffrey says he knew Norman and a couple others.

He says a couple of others wouldn’t even make eye contact but then after the scene, Norman and Andy were texting him to welcome him. Robert says this is oddly great and he’s excited about his. He says it’s sad and distressing what’s happening but is good going into season 7.

#1 Which is not an option Negan gives our survivors? You can blink, scream or cry? Answer is scream.

#2 Eugene says to Rick I’ll be your blank yes I damn well. Huckleberry, hero baby or anchorman? Anchorman is the answer.

#3 How many times does Morgan shoot the Savior? Four, five or six. Six is the answer.

We see behind the scenes of the Red Rover walker scene and Ross Marquand says that’s terrifying. Sonequa Martin-Green talks about the one with the chain through it and says she can’t even look at it. They have fake chains so they’re light.

Michael Cudlitz says it’s their most intense episode and Josh McDermitt says it’s scary and fun and he loves this job. Michael agrees. Chris says Greg Nicotero directed it and he’s there in the audience. They cheer for him.

Chris asks Norman about Daryl’s journey. Norman says Rick and Daryl had a back and forth about trusting people and bringing them into the group. He says that was Daryl’s first time to go recruit and says if you make a mistake in that world, it bites your ass.

Chris asks Robert why they called this group the Saviors. He says if you just came into the show at Season 5, you would think Rick was a bad dude and a lunatic and that’s how Negan sees him. Robert says Negan killed someone who is “very beloved to everyone.”

Jeffrey says like Rick, Negan is just kind of a charismatic leader and people are a little scared of him but in that world, people will follow a guy like that. He says Rick is a little psychotic and has done crazy stuff over the years and they’re two sides of the same coin and are very similar.

Jeffrey says Negan is letting him off kind of easy since Rick and Daryl have killed 20 or more of his guys. Jeffrey says he only kills one out of 10 and you get nine good followers. Now a poll question. How do you feel about Negan – love to hate him or hate to love him. Most everyone says love to hate.

Chris asks if Jeffrey is prepared to be this guy forever. He says sure but he knows the fan base is passionate and some are a little bit crazy. He says that will come with some love and some hate. Jeffrey says he’ll change those poll numbers.

Chris asks about Norman’s new motorcycle show he filmed on the break of the show and embarrasses Norman by asking if AMC is just handing out vibrators to viewers. Chris teases Norman who actually blushes at Chris hassling him.

Now some behind the scenes info. The RV was too tight to allow in crew or cameras so they filmed from outside for many shots. Lennie James checked off his bucket list learning to ride a horse since he’s from south London where there are none.

We see the fire roadblock was built so it could be lit and extinguished multiple times. Scott says Morgan didn’t want to kill someone but had to so he could save Carol and now that changes things for him. He says Morgan had to face something where his philosophy didn’t work.

Chris asks Scott if Carol is ready to die and he says yeah she was. Jeffrey says as a fan of the show, it’s a bummer that someone is leaving but as the guy playing Negan, it’s got to happen. We see a clip from Season 2 of #FeartheWalkingDead.

Robert says there’s a lot of boat action in tight quarters so it will be deep. A fan asks Norman if Daryl would have gone after Carol if he had known and he says hell yes. He says she’s badass and he might give her space but would go after her.

A caller asks Norman if it was harder losing Denise or being captured by Dwight. Norman says Denise for sure and says he was just getting to know her and liked her. Jeffrey says it was a great moment for Eugene when he drove off alone in the RV.

Jeffrey says he likes that Eugene grew some cajones and had that moment. Chris says he likes the bro moment between Eugene and Abraham. Norman and Jeffrey argue if Negan’s jacket or Daryl’s vest is better. Then we see fan tweets about their stress watching the episode.

Now we see Skype questions. One asks if Judith will grow up to be a leader, brave, or a sword wielding fighter. Norman says she will be like Daryl with a tiny bike and a redneck badass. Chris says he thinks she might grow up to be like Shane.

Then Robert says who said she gets to grow up. A grandma Skypes a question for Norman about his hobbies and if he uses his crossbow outside of work and if he’ll marry him. He says he rides motorcycles, has a cat, and sometimes shoots his crossbow.

Then there’s a dog who asks Robert about monocular characters since he’s a one-eyed dog and if that can continue. Robert says eyes are the windows to the soul and when you lose one, maybe they’ve lost a piece of their soul or maybe he thinks it’s cool when people lose eyes.

Then a Skype question for Robert about how he comes up with evil Negan and the weapon Lucille. Scott asks how the Wolf got onto Skype. Robert says Charlie Adlard sketched out people with weapons and he liked the one with the bat. He says the art decided it.

Then a woman asks if we get to see Daryl in a shower scene and Jeffrey says he’d like to see that. Norman says maybe if we get warrior grandma. The audience cheers. Norman gives a stop sign and looks blushy again.

Josh McDermitt and Michael Cudlitz talk about how they pick out Abraham’s swear words with two dice with dirty words so you get mother dick and bitch nuts. Chris says people are tweeting and are very upset that they don’t know and feel like it’s a stunt.

Chris says there are usually cliffhangers on shows but they want the tension released. Robert says as a fan, he loves cliffhangers. He says every comic ended with a cliffhanger. He says the story of this episode is Rick’s confidence being shattered because there were so capable.

He says this was about tearing Rick Grimes down and says that’s the conclusion and the story of who died and what comes next and who Negan killed is Season 7’s story. Scott says when they opened the hatch, they had to wait to see who was in the hatch and they liked it.

He then mentions a Start Trek cliffhanger. He says when McDreamy was left at the altar… then he says he made that up but something like that happened. Chandler Riggs tweeted that he doesn’t know who died either and it’s been six months.

Scott says we have to do an episode that justifies it to them and that’s the challenge they will deliver in Season 7.