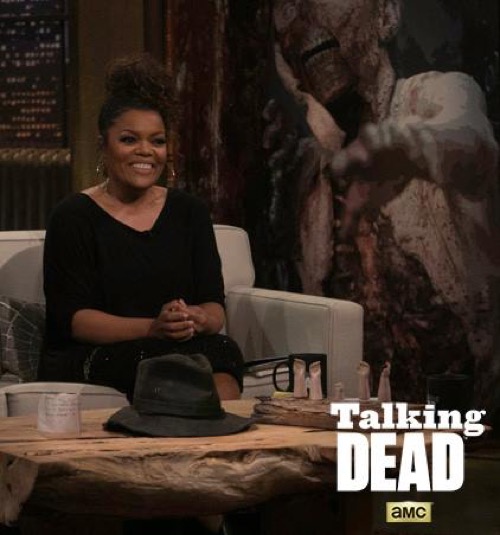 Tonight on AMC Talking Dead returns with an all new Sunday March 27, season 6 episode 15 and we have your weekly recap below. On tonight’s episode, guests talk about the “East” episode of “The Walking Dead.”

#TalkingDead tonight has Yvette Nicole Brown, Denise Huth, and Sonequa Martin-Green. Chris asks if Daryl will survive and Maggie’s baby will be okay. Chris says if Daryl dies, he’s not coming back to work next week.

Chris says were calling Yvette the Grim Reaper because she comes on and bad things happen. Yvette says they love the show and made the choice to love it. She says if you love a soap you can’t be mad when people kiss and can’t get mad in the apocalypse when people die.

Yvette has her notebook and says she has several and will auction one off. She says she wrote about Daryl being shot – not like this, Lord. She says Dwight is not worthy to take out Daryl. She says it’s a Governor or the guy with a bat – a big bad.

The poll asks if Daryl will be okay. Yvette says she thinks it was a shoulder hit. 92% agree. 8% say Daryl dies. Denise says he definitely got shot and there was a lot of blood but he’s tough but says Dwight can’t be trusted but has no reason to lie.

She says they’ll find out next week. Yvette says Carl has been shot twice and Eugene too. Denise Huth says Daryl is angry about Denise being shot with his crossbow. She says Daryl was trying to bring Dwight in and tried to help him and is really angry.

Denise says when you are angry, you don’t make good decisions. Chris says a lot of Alexandria’s best fighters are gone right now. Sasha says it’s a testament to how tough Alexandria is now that they can take care of themselves and Rick trusts them all.

Chris asks about Carol leaving. Sonequa says Sasha is embarrassed she left on her watch but Carol is #boss and is legit so she’s capable of getting away from her. She says Sasha is the community sniper, so that’s worried. She says no one is getting in on her watch.

A fan asks if Rick thinks he got Negan when he shot Primo. Denise says Rick knows more are coming either way. Yvette is asked if Dwight can redeem herself. Yvette says Morgan might, but she won’t. Now it’s the In Memoriam – barn walkers, truck dicks, truck dick walker, truck dick on a stick.

The end quote says don’t be a dick to Carol because you never know what she might have up her sleeve. We see Melissa McBride being interviewed. She says Carol is motivated to leave by internal conflict and whether she can keep killing.
She say Carol knows she has to kill to save those she loves and if she can’t, she has to leave. Chris then reads some Carol reactions – one says Carol is badass and pimped her ride with sticks. One says they like her no hugs car and is like Sarah Connor.

Chris says Carol is trying not to kill people but it’s pretty satisfying when they push her after she warns them. Yvette says the director did a great shot where you can see rosary up one sleeve and says she sewed the gun into her sleeve before she left to prepare for the inevitable.

She says she thinks Carol was playing when she was hyperventilating but thinks she’s fighting herself and the person the world has made her into. Sonequa says trouble is upon Alexandria and coming. She says when you try to start a new life, like Carol is, she’s still the same person and it’s a harsh reality.

Chris says the Savior body count is getting high so they will take horrible revenge. The Alexandrians are bad to them for continuing to kill them. Denise says the gun sleeve was really fun and says props worked with wardrobe to get the look right.

She says this was late October so they had less light to work with and they have to work faster since the days are shorter and they can film less. Denise says any day filming with Melissa is a great guy. She says when you saw that, you got excited when you knew Carol was going to kill them all.

Yvette says Carol has been fighting longer than anyone else because of her combat with Ed in their marriage. She says she told Daryl to let this out after Beth died but Carol doesn’t let it out – and now she’s finally crying. She says Carol is the aggressor when she used to be a victim and that’s messing with her.

A caller asks Denise why she thinks Tobin didn’t go after Carol. Denise says it just happened fast and Morgan was out the door so fast and Rick hopped in. Tobin knows Morgan and Rick are on the case and he’s more of an inside the walls guy.

#1 The man who Rick and Morgan encounter is looking for what? His wife, horse or gun. Horse is right.

#3 Who picks up Carol’s rosary? Rick, Morgan or a Savior? A Savior is right.

She says Abraham and Sasha have similar experiences because she was a firefighter and he was a soldier and they both had PTSD. She says there are parallels and he is where she was before and Bob pulled her out so she’s doing that for him now.

Chris says you break up with someone and it’s bad but when there are eight houses in Alexandria, Rosita sees them. Sonequa says Rosita is family so that kept Sasha back from him until Abraham settled things with her.

Yvette says she likes Sasha-Ham. She says they are all great actors and there are these little things that hinted at it. Sonequa says when Abraham told Sasha that 30 years was not enough, that’s a proposal. She says Sasha was wary of close relationships and is ready now.

Chris asks Abraham about Rick being ready to let someone get close and if he’s scared. Denise says she likes that and says when Deanna asks Michonne what she wants in life, that was a big question. Denise says Abraham and Rosita were together out of circumstance but there was real feeling there.

But she says in Alexandria, it’s about taking a breath and making a choice. She says it’s one of the most hopeful things they’ve done. Chris says when a show starts with them doing it, bad things will happen. He says when he saw Glenn and Maggie in the shower, he knew things would get bad.

Now some behind the scenes stuff from tonight’s episode. All the spikes on the car were real except the one that killed the Savior which was digital. They called it the porcupine car. The scene with Daryl and crew was shot in a Georgia river flood plain.

Because the trees were so dense, they had to carry in all the equipment for the shoot by hand piece by piece. They picked the one woman walker because she looks like Carol and is Melissa McBride’s stunt double.

Lauren Cohan talks about Maggie’s hair cut. She says Maggie is trying to suit up to be a mother warrior to make things happen. She says it’s part of her bond with Enid to have her cut her hair then mentions dark horrible twists coming.

Chris asks if Maggie is cutting her hair like when Shane shaved his head. Denise says Shane got his hair pulled by Otis then Maggie had to fight the female Saviors so it was a combat reason. Denise says it broke the internet when people saw Lauren with short hair and they thought she died.

Yvette says she was worried about those old pickles that Maggie ate and says maybe she got a bad taco and doesn’t want to think something bad happened to the baby. Now a poll. If Yvette was on the Walking Dead, who would you ship her with – Daryl, Morgan or Tobin. Sonequa says she likes Morvette.

66% voted Daryl and their name would be Darvette. Denise says all the group is evolving and she loves everything with Morgan and Rick this episode and how far they both came. She says they mimicked an episode from Season 2 with Shane and Rick. Denise says Rick is now more “Shane-ish.”

She says the world is changing them in massive ways. Chris says Rick kills with the coldness of an exterminator now. Yvette says she liked what Morgan said about the circle thing. She says with Eastman, there were a lot of circles there.

She says Morgan is still holding onto Eastman. She says she agrees it’s not as cut and dried as Rick thinks it is and sometimes you need to stop and think. Next week for the finale, Scott Gimple, Norman Reedus and Robert Kirkman are on the couch.

A fan from the audience comes up and asks Yvette what she wrote in her notebook about Michonne and Rick in bed. She says she wrote the line from the Titanic – draw me like Jack did Rose. Chris gives her a spike and an apple which he bites first.

Chris asks if finding love on this show means you’re doomed. Sonequa says no. She says Maggie and Glenn have been in love a long time. She says when you open up and take the risk, it strengthens you and may be the secret weapon.

Another poll asks what people want to see most on the finale  – Negan’s arrival, Carol’s destiny or Daryl’s fate. 67% chose Daryl. Now we see a sneak at the next episode. Gabriel tells Rick about the watch tower planned, evacuation and rendezvous plan.

He tells him that Judith is his top priority and won’t fail Rick. He asks if Rick is comfortable leaving him in charge. He says yes. Spencer tells Rick if the Saviors show up, should they try and make a deal. Rick says tell them to wait for him because he’s got a deal for them.

Yvette says she’s liking Gabriel more now and has stepped up. She says he can be trusted with Judith. Chris asks Denise to describe the finale in one word. She says Negan. Chris says the B season has been incredible and he’s stressed about next week.

Sonequa says trouble is here and they have consequences to deal with from their choices. Chris thanks them all and that’s it. Talking Dead is on 10:30 next week due to the 90 minute Walking Dead finale.