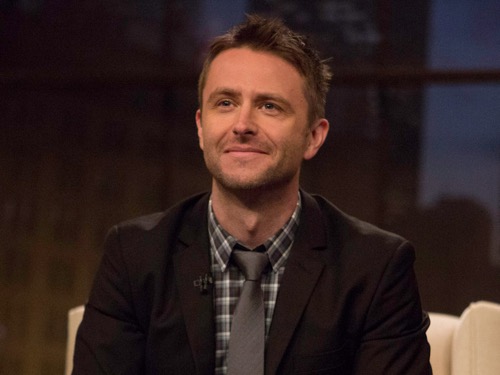 Tonight on AMC Talking Dead returns with an all new Sunday March 20, season 6 episode 14 and we have your weekly recap below. On tonight’s episode, guests talk about “Twice As Far” episode of “The Walking Dead.”

On the last episode Talking Dead host Chris Hardwick sat down with Alanna Masterson (Tara), Ross Marquand (Aaron) and actor J.B. Smoove who discussed the episode “Not Tomorrow Yet” from The Walking Dead. Did you watch the last episode? If you missed it, we have a full and detailed recap right here for you.

Tonight on Talking Dead as per the AMC synopsis, “Josh McDermitt (Eugene) and Christian Serratos (Rosita) discuss the episode “Twice As Far” from The Walking Dead. Hosted by Chris Hardwick. Tonight, Alexandrians continue their lives and go out on routine scavenger runs.”

#TalkingDead starts with Chris Hardwick talking about where Carol went and how Eugene and Abraham broke up over dibs on a walker. On the couch tonight is Walking Dead fan teacher Greg Raiewski, also Josh McDermitt (Eugene) and Christian Serratos (Rosita).

Greg talks about how happy he is to be there and Josh rubs his leg and says he’s going to make him uncomfortable then asks for extra credit. Chris says dudes usually prefer a little less teeth. Josh says the bullet thing is a chance for Eugene to take Alexandria to the next level.

He says Eugene is thinking big picture while the community is living paycheck to paycheck. He defends Eugene and says he called dibs and dibs is dibs. Josh says he loves that Eugene lives by rules that no one else knows and doesn’t want to be protected anymore.

Chris says it was like – you shut up dad. Josh agrees it’s like teen angst. Rosita says the bullet scene was emotional.  Christian says as a fan, it felt like Abraham’s army is going in a different direction. She says she protect Eugene for so long.

Greg says he integrated Talking Dead and Walking Dead into the class to extend their literary analysis. Chris says Greg is super tatted up and they’re all literary. Chris asks what he would point out about the episode. Greg says the baby imagery, Rosita mentioning babysitting Denise, the kid photos.

Now the In Memoriam. Tree fallen walker, metal head walker, don’t take my cooler walker, Denise’s breakfast, caught in the crossfire walkers, train track ambush gang, Denise. The ending says she tamed the wolf, loved Tara, and save Carl and did NOT deserve this.

Gale Anne Hurd talks about how much Denise affected all the other characters. Daryl says hated losing her and says Merritt is awesome. Michael says it will take the audience by surprise. We see a pic of Merritt with an arrow through her eye and smiling.

Chris says they tried to get Merritt Weaver on the show but she had scheduling conflicts. Chris says she was amazing on Nurse Jackie and Josh says they were all so excited when she joined the show and says they lose people and it’s sad because they’re just getting started with her.

Josh calls Merritt and amazing actor and person. Christian says it was so hard to shoot her death scene and says it comes for everyone and will come for all of them on the show. She says she did an amazing job up til the bitter end and says she got lost in what she was doing.

Chris says you never want to be the moral compass on this show. He says they killed a bunch of Negan’s people and now they’re killing back. Greg says he was yelling and says Walking Dead got him again. He says she was evolving and Alexandria needed her.

He says it was a consequence of her evolution. He says it was a perfect moment when she got her soda and she saved people in the end with all the medicine. Josh says there are definite parallels between Eugene and Denise and says others protected them.

He says of course the writers mixed it up since that was supposed to be Abraham’s death in the books. Chris reads a question for Josh – how do you feel about mullet to brony tail? Josh says it’s the biggest moment in the comics and says everyone can ride the pony.

He says Daryl has hair in his face all the time and looks sexy but says Eugene can’t aim through the hair. Christian says she wants to see Eugene with Rosita pigtails and Josh agrees and says come on Gimple. Now the quiz.

#1 How much older was Denise’s brother? 6 minutes, 16 months, 6 years? Six minutes is correct.

#3 What are Dwight’s first words to Daryl and Rosita? Remember me, look who it is, or well hell? Answer: Well hell is correct.

Chris asks should the group go after Carol? Greg says he loves her but no, they can’t spare the resources. He says he thinks the group is getting ready for war. Josh says they need Carol. 79% of viewers say they should go after Carol.

Christian says the apothecary set was so amazing they even got creeped out about it. She says the set dressing is always remarkable but that room was epic. The mold, the fog, the floors were kind of squishy and felt wet and rotted.

She says it smelled strange and gave them a bit of a headache. She says one of the Pas sprayed with perfume so it smelled like mold and perfume. Josh says the metal head walker was great and says it’s a difficult kill no matter who you are.

He says they filmed that in a machine shop on the campus of Georgia Tech. He says the guy who did that has been a walker that they’ve killed 30 times – he says his name is Coleman. He says it was fun to have a walker like that.

He says Coleman is great and doesn’t let you off easy and really comes after you and says he was really trying to bit me. Josh insists Eugene could have dealt with it. He says he’s still upset that Abraham stepped in and says it was dibs.

Chris says he likes how he’s angry like it’s a documentary. Josh says this was his and Michael Cudlitz’s favorite scene.

Now we see some inside info on tonight’s episode. Dwight (Austin Amelie) sat for an hour to get the burned flesh effect. The actors can only hear quit clicks of triggers in gunfight scenes. Scott Gimple wanted to make it clear that Denise was vomiting oatmeal.

Norman talks about how gross you get on the show and says he’s always got blood on him and says the airport security in Atlanta is really nice because they’ve seen him bloody so many times before when he has to work late.

Chris says people are so happy to see Daryl get his crossbow back and call it the sweetest reunion on the show. Now a fan from the audience comes up. She asks Christian what it means now that Rosita saved Abraham in the shoot-out.

She says it was reassurance that they are still family and proves she’ll always have his back even if they’re not in a relationship. She says they have a bond that’s deep. Chris gives her an arrow with a metal arc that will fit over her head and makes her look dead.

Chris asks Christian why Rosita is so put off by Spencer’s dinner invite. Chris says he’s obviously into her. Christian says she wasn’t looking to be in a relationship with him and just wanted to hit it and quit it. Josh says that’s how Christian answers him when he asks her to dinner after work.

Now a poll – should Rosita and Eugene consider a romance? Greg says Alexandria is for lovers. 58% say yes. Josh says it’s a little low and is not overwhelming. Josh holds out his cheek and Christian kisses it. Chris shows off the next series of action figures including dale with his guts ripped out.

It also has T-Dog and Beth. Josh asks if T-Dog has a removable shoulder. Chris cracks a joke about Eugene not having a nut allergy. Josh says the crotch biting stunt was a lot of fun. He says Austin Amelie was like – welcome to set, we’re going to bite off your dick.

He says they had a rig on him to protect him then a rope that came out of his fly that he bit down on and says he could actually control where Austin moved. He says the stunt coordinator went to a lot of trouble to make sure they were safe.

He says Austin thought he had bit down and he thrust forward and he almost knocked out a couple of his teeth. He says it was great. He says Rosita went to Norman and says they should get a hot dog truck on set that day so they can all bite some weenies today.

She says they had Dwight’s dog and the Eugenie Weenie. He asks Greg to compare Eugene and Abraham to literary figures. He says King Lear and the fool who is wise. A caller asks Christian who is the biggest prankster on set?

She says she’s sitting with him and says it’s Josh. She says he pranked Michael on this episode as well as her and Norman. She says they had to pick him up and carry him and he’s already a big guy. She says he filled up every pocket with rocks to make himself so heavy.

Josh says he’s already heavy so it was funny to make himself as heavy as possible. Another poll, what is scarier, fighting walkers or teaching teens. 85% says teaching. Now a scene from next week. We see Carol’s rosary lying on the ground, a bloody spike, and blood dripping.

Chris gives Greg a giant basket of every prize they’ve given away this season. There’s also signed cast memorabilia. Chris says he hopes the kids appreciate their devoted teacher. Yvette Nicole Brown and Denise Huth are there next week.