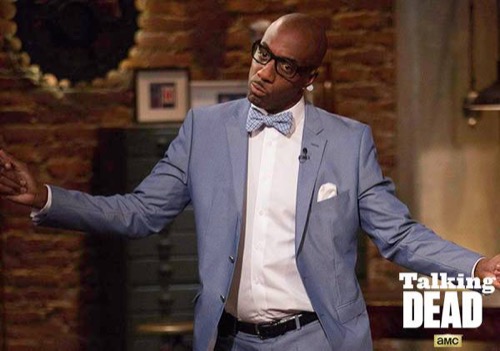 Tonight on AMC Talking Dead returns with an all new Sunday March 6, season 6 episode 12 and we have your weekly recap below. On tonight’s episode, guest talk about “Not Tomorrow Yet” episode of “The Walking Dead” is discussed.

On the last episode Talking Dead host Chris Hardwick were sat down with Lauren Cohan (Maggie), a surprise cast member and musical artist Kid Cudi discussed the episode “Knots Untie” from The Walking Dead. Hosted by Chris Hardwick. Did you watch the last episode? If you missed it, we have a full and detailed recap right here for you.

Tonight on Talking Dead as per the AMC synopsis, “Alanna Masterson (Tara), Ross Marquand (Aaron) and actor J.B. Smoove discuss the episode “Not Tomorrow Yet” from The Walking Dead. Hosted by Chris Hardwick.”

#TalkingDead tonight has JB Smoove, Ross Marquand (Aaron) and Alanna Masterson (Tara). Ross says he loved the script and loves the increasingly darker episodes in the last half of this season. Ross says Aaron sees that after the Wolves, Morgan is clearly wrong.

He says Aaron is more pragmatic than Morgan. Alanna says it’s a lot like when the Governor attacked the prison and gave that speech. She says Tara trust Glenn, Rick and Maggie more and says she didn’t believe in the Governor like that.

Chris mentions that Alanna had a baby a couple of months ago. She says they did big sweatshirts and stuff placed in front of her. She says it was 110 degrees in Georgia and it was hot. She says in tonight’s episode she was almost nine months pregnant.

She says she waddled onto set and now her daughter can see that she was in there. Chris says they’re stupid to go murdering them but JB says you do what you got to do to survive. He says they’re still the good guys.

He says what threw him off was when you kill people the same way you kill zombies and that has to be weird but you’ve got to do it. Chris says they should have investigated some more. JB says it’s two new people – the Saviors and the Hilltop.

There’s a question of how Shane would have handled the Saviors and Ross says the same way and says he wishes Shane would be alive now so they could rule together. Then they talk about Rick and Shane being my two dads since they don’t know who’s baby Judith is.

Now it’s time for the In Memoriam. Google Eye walker, pick a head any head walker, this savior guard, that savior guard, Glenn’s sleeping saviors, alarming savior, firefight saviors… Then they ask if there is still a line, did the group cross it and will Maggie and Carol pay the price?

Denise Huth talks about them attacking sleeping people and says the characters had to feel that weight. She says it was heartbreaking when Glenn had to take a human life. Chris says most people think Negan’s group is worse than Rick’s group.

Lots of tweets are about Glenn. JB says Glenn got on top of Maggie and made life and now he’s taking life away too. JB says Glenn has been through so much and almost died three times. There was the prison, this and then the dumpster, the damned dumpster.

JB says I’ve slid below dumpsters plenty of times. JB talks about Heath messing with his glasses and says you know there’s a problem. Tara also did her first human kill since she hid when they attacked the jail so she wouldn’t have to.

Alanna says Tara will do anything to protect Denise. She says Tara also wanted to protect Hilltop and Alexandria. Ross says there was going to be a battle at some point and after the Wolf attack, no one wanted to wait.

Chris mentions Carol’s death diary. JB says he loved it and says you should keep a running tally of pets, sexual partners, kills, and more so you can pay your taxes at the end of the year. Now the quiz:

#1 What is Eugene eating when Rosalie sees him? Carol’s cookie, Morgan’s power bar, Goo-Goo Cluster. Carol’s cookie is the answer.

#2 Rosita asks Abraham if he’s packing what? His grenades, handguns, stilettos. Stilettos is the answer.

#3 Gabriel tells the man he shoots – In my Father’s house there are many mansions, many mausoleums, many motels. Many mansions is the answer.

The actress who plays Rosita says she was excited to film the break up with Abraham. Michael Cudlitz says Abraham has deep love for Rosita but isn’t in love with her. She says it was sad when it was just Eugene. The break up reaction online is negative.

They talk about how brutal the split was. Chris says tag it #Abrahamlet and let us know your favorite Abraham quotes. There’s a poll question of asking if they were shocked by the way he did it. Most say yes. JB says Rosita’s guaranteed ass and Sasha needs to show him something.

He says Sasha didn’t even flash him a thong and says where is Abraham going? His mom’s house? JB says he can only move 20 feet away. Alanna says Tara is scared to leave Denise behind because they might die like her mom and niece.

Chris says you can’t communicate and let people know you’re coming home. Aaron says Carol is very damaged and she’s dealing with demons and that’s why she has the list, not just for tax purposes. Chris says Carol is what she needs to be and he loves her.

There’s people tweeting they’re happy Carol finally got some. JB says safety is the gateway to sex. He says when you feel safe, panties come off. He says butts come out. He says Michonne and Rick are doing it. JB then says they haven’t washed their asses in weeks.

A caller asks about Aaron’s relationship and Ross says Eric is still figuring things out at the big fight with the Wolves and the walkers. Ross says Aaron still feels guilt over the Wolf attack for losing his backpack. He says that’s why Aaron goes on missions.

We see a behind the scenes of digital effects and weapon swaps where they swap real and partial weapons to get the best look for the scenes.

An audience member comes to ask a question of Ross. He asks if he found it strange killing human extras. Ross says it was fun because they got to kill a couple of guys from the makeup artist – one was the really tall one and one was the alarm guy.

Chris gives the guy beet and acorn cookies and a bloody fake head in a bag. Chris says he’d like to give him a little head and tells him to enjoy. Alanna says Maggie and Carol being taken is huge since they don’t know how big this army is.

She says they have to wonder how long these arms reach and that the threat is not over. Chris says Rick had hubris about them winning. She says are there 700 of them – they just don’t know. Chris says it’s like being great in your own neighborhood.

JB says when he heard the female voice, he was relieved because he thinks ladies won’t kill ladies that fast. Chris disagrees. JB says if you’re shopping and a woman’s voice tells you they’re closing and to bring your items, he keeps shopping.

Then Alanna gets asked if Tara and Rosita have a low key romance going on. Alanna says no and says Rosita is super into dudes and Tara is super into girls. A caller phones in and asks about the cookie on Sam’s grave. He asks if Carol feels guilty about Sam’s death.

Alanna says kids are always dying around Carol. Chris says he would be Sam in that world. Ross says people have time to reflect now that they’re safe and the walls are up and she’s looking back at the past few years since she and Rick have changed the most.

We see some behind the scenes of the big shootout and Greg Nicotero says it was huge. The props master says it was close quarters. Denise says firing blanks is not totally safe because the shell casings are hot and the camera people and actors are all at risk.

Ross says it was great and says Abraham and Rosita are real soldiers and taught them all things about how to do this. Then a poll who would you rather go on a two week run with? JB Smoove, Aaron or Tara. Aaron says he plays a mean game of I Spy.

JB says if you think those cookies are good, have you tired toe jam cookies. Aaron got 64%. JB only got 8%. He’s offended. Chris asks Ross to do some impressions and he does Michael Caine. Then someone wants Jason Statham. Then Pacino with Rick. Chris gives him a Rick notebook as a prize.

Chris asks what Morgan is welding and JB says he hopes he’s welding himself into a cage so he doesn’t kill anyone. Aaron says he thinks it’s a robot. Now a scene from next week. They have the Savior at gun point and talk to the Saviors about Maggie and Carol.

Carol is on the walkie and says they’re fine. Maggie confirms it. Rick says let them go and you can have your guy and live. One of the guys tells them they need Primo back. Chris talks about the weed room they found there and reads a tweet “Jesus take the weed.”

Aaron says the poo walkers in the sewer scared him most. Alanna talks about being startled by some of the walker extras.