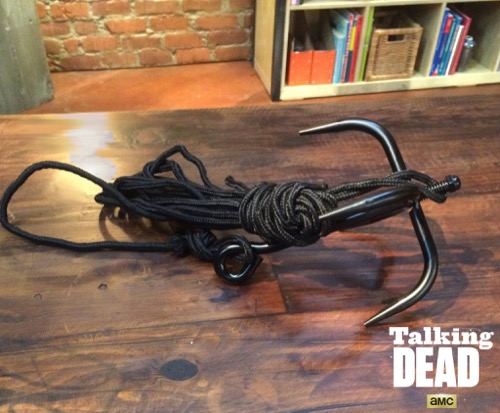 Tonight on AMC Talking Dead returns with an all new Sunday February 14, season 6 winter premiere and we have your weekly recap below. On tonight’s episode, guest talk about “No Way Out” episode of “The Walking Dead” is discussed.

On the last episode Talking Dead host Chris Hardwick sat down with Robert Kirman who’s the creator of The Walking Dead, and a surprise guest would be joining him. Did you watch the last episode? If you missed it, we have a full and detailed recap right here for you.

Tonight on Talking Dead as per the AMC synopsis, “Talking Dead host Chris Hardwick will sit down with Executive Producer Greg Nicotero, Carrie Underwood and a surprise cast member discuss the episode “No Way Out” from The Walking Dead. Hosted by Chris Hardwick.”

The show is packed tonight and we will get an exclusive sneak peek of next week’s episode, plus special guest, the “wolf” Benedict Samuel.

Chris says that he loves that Abraham just wanted to know who people were and he thinks this was definitely one of the best episodes of the season. Greg says that in directing the episode, Scott came up with the idea to set the lake on fire and they decided that doing it at night would be best for the effect but it was real tricky because they had minimal time during the night to do it.

Carrie says that she has been walking TWD since episode 1 because of the great story line and has tried as much as she could to watch it live. Chris asks Benedict what fan reaction has been to one of the creepiest characters ever on TWD. He says in Australia where he lives, I guy took a photo of him and his girlfriend wouldn’t come out of the car, she looked terrified.

Finally Morgan is up and put down the wolf; Greg says that he thinks Morgan finally got to the wolf before he turned to a walker.

Chris asks Carrie what her reaction was when they lost the whole family at one time. She says she wishes that Sam would have left with Gabriel, it would have saved them all. Chris asks Greg how they set up that whole scene, he says that as soon as Sam didn’t go with Gabriel, it sealed the family’s fate. Working out the choreography, everyone had to be quiet. They made bleeding dentures for Sam that had a blood tube and made the blood just poor out of his mouth and down his face. Chris says that he so surprised that they killed off a potential love interest for Rick.

Greg says that he didn’t even realize which episode was going to be where. Chris asks Carrie if she would trust her baby with father Gabriel, she says no. Chris says he would have kept her with him.

Chris says that he wasn’t sure how they were going to do Carl losing his eye. Greg says they did a life cast of Carl for Rick to run around with. The wound on Carl’s eye, was digitally added. A lot of the scene was shot without Carl, it was all Rick with the dummy. Chris asks Carrie if she thought Carl was going to die, she says no but she is wondering what this is going to do to Carl’s personality.

Chris asks Benedict what he thinks the biggest danger is, he says it is that Rick is getting soft.

Carrie says that she loved that Glenn and Maggie were reunited and thinks he is the luckiest person, he is always saved.

Greg says that the way they develop each episode is that Scott has conversations with the actors.

Fan question time: for Greg, what really went into blowing up Neegan’s brigade. He says that with the particular shot, they blew up dummies with three propane canisters at the same time for effect.

Chris says congratulations to the whole crew of TWD, Greg tells him that it took 200 people to pull of tonight’s episode and one of the most critical things was to do the fire in a real lake, they did it and the flames went as high as the real houses; they did it 9 or 10 times through the course of the night.

A caller has a question for Benedict, how did they get his teeth to look so nasty. He says a team of three people painted them and he was told he couldn’t lick his teeth and there was so much grit and grime.

Chris asks America a question, could Carrie Underwood survive in a zombie horde? Carrie says she relates most to Maggie, but she is a farm girl as well. America votes 64% no, she would not survive.

Time for the sneak peak of next week’s episode, we see Rick and Darryl running…. and that is it.