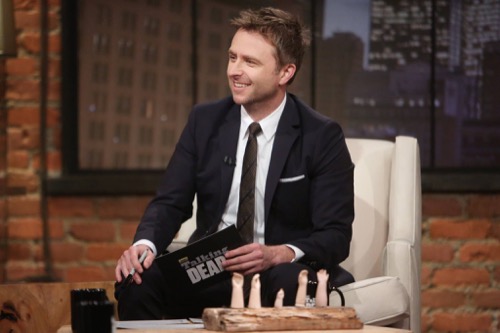 Tonight on AMC Talking Dead returns with an all new Sunday April 24, season 2 episode 3 and we have your weekly recap below. On tonight’s episode, guests talk about the “Ouroboros” episode of “Fear The Walking Dead.”

On the last episode Talking Dead host Chris Hardwick sat down with Kim Dickens (Madison Clark), actor Lou Diamond Phillips and actress Lyndie Greenwood discussed the episode “We All Fall Down” from Fear the Walking Dead. Hosted by Chris Hardwick. Did you watch the last episode? If you missed it we have a full and detailed recap, right here for you.

Michelle says Alex is the last person to board the plane and then the passengers are fussing about the plane not taking off. She says Alex has an attitude then a passenger gets sick and Alex is wary but you don’t know why and then the guy locks himself in the bathroom.

Michelle says it turns out that the air marshal won’t listen and the guy turns and chaos ensues. She says Alex has had some experience with the infection but doesn’t give up any information. She says she didn’t know anything about Flight 462 and says it was an audition for something called Rhino.

She says the audition was her in a train station being annoyed by a kid. Lorenzo jokes Chris went into the plane looking for food. He says Chris has had no time to process his mom’s death or say goodbye. He says the last thing he knows is his dad killed his mom and it’s hard to show that.

Lorenzo says he wants to make it real what a 16 year-old would go through and it’s hard to grasp the reality. He says there’s no In-And-Out and Chris says they should send him some. Chris Jericho complains he couldn’t bring out his Starbucks but he’s plugging the burger joint.

Lorenzo says he’s getting a lot of pros and cons about Chris on his social media feeds and says they need to understand Chris’ psychological issues. Chris says for the characters the world has just changed and it’s abrupt. Jericho says he likes this show because most zombie shows are in the midst.

He says he likes this because it’s the beginning and says if someone staggered in, you would help him and not think to kill him. Jericho asks how long would it take to embrace the new world order with no one there to protect you like the military or police.

Chris says there also seems to be no zombie lore in that world. Chris says we’d all die trying to take selfies with zombies to post on Instagram. Now it’s the “In Memoriam.” We see that we lost the tray table infected, Chris’s mercy kill, crabby Joe infected, flight 462 passengers, beach invasion infected.

Alycia Debman-Carey says her character Alicia has to kill the first time on this episode and that’s a huge development and symbolizes the group is all on the chess board now. Michelle Ang is also from New Zealand. Michelle says Cliff Curtis has never worked with another Kiwi.

She says they joke around behind scenes between takes and slip the American accent. Chris asks Lorenzo about Chris killing a living person and he says he thinks it helps Chris process why his dad had to kill his mom and get some closure.

Chris reads a tweet that Chris is the Shane of this group. Another called him Chris the Ripper. Lorenzo says Chris didn’t tell anyone he killed the guy because he’s scared what others will think. Jericho says you still hold on to society’s idea of killers.

Lorenzo says he’s trying to find his place at the dinner table and a kid becoming a man and is ashamed. He says when you do something bad, you want to go to who you love and talk to them but he’s scared to tell his dad.

Chris says people always say “why didn’t they do…” and that’s because they’ve been watching “The Walking Dead” for five years and have no clue they’d be crapping their pants. Jericho says you still don’t know that you wouldn’t get in trouble for this.

Then Chris asks Michelle about Alex murdering the guy on the raft. She says she murdered two on the raft because she’s in a delirious state after the plane crash and Jericho says she knows something. And now it’s the quiz.

#1 Travis tells Strand he knows how to rebuild what – computer, transmission or carburetor? The answer is carburetor. The first time we saw Travis he was fixing a sink.

#2 The robe Alicia finds in the plane crash has what pattern – circles, flowers or stars? The answer is flowers.

#3 Ofelia tells Nick you smell like what – death, garbage or fish guts? Death is the answer. Nick picks through the suitcases like he used to pick through garbage cans.

In a behind the scenes look at the beach walkers, we see Frank Dillane talking about the metaphor of the dead rising, how do you deal with that as a human? There’s some Nick tweets read – one says he figured out the secret.

Chris says it was great that Nick finally changed his shirt and Jericho comments that Lorenzo is the only American on the cast and the only one without an accent. Jericho also says he likes Nick face to face with the zombie because he was a zombie when he was an addict.

Jericho says he likes the allegory (not the right word) of him facing off with the walker. Chris says these characters are in an extreme situation and you see their true character and it’s a great chance for Nick to gain redemption.

Jericho says it shows who will make it a year or two. He says he thinks a couple will be dead by the end of the season because they don’t get it that they need to stop being nice and kill some people. Chris says he’s glad Nick didn’t try to get high off the zombie blood.

Chris asks how they choreographed the beach fight. Lorenzo says it was nuts and like out of The Mummy with Brendan Fraser. Michelle agrees it was insane. There was a 360 and there were about 15-20 stunts and about 50 walkers.

Lorenzo says they’re not allowed to hit them and Michelle says Ruben Blades (Daniel) did a back flip. Lorenzo says when Ruben did the pistol shots, he was saying boom out loud. The poll questions asks, in the current group, who has the best approach to survival – the kids or adults?

Jericho says he hated Chris until this episode who is like the dumb kid in the horror movie who causes problems. 91% of responders agree it’s the kids.

Now a look at more of the beach shoot. Ruben Blades says Frank Dillane is the best at piloting the launch. Ruben has no driver’s license and prefers to walk. The extra who played the crab guy was buried up to his waist and the crabs were digital effects.

The spine injury was practical makeup – the fake spine was made of urethane then covered in fake blood. Kim Dickens (Madison) talks about the scene between Madison and Travis and the difficulty of them working together and they have different approaches but want to stick together.

A fan from the audience comes up and asks Michelle how realistic were the burn prosthetics on Jake. She says it was so realistic and says he spent hours in the makeup chair and says it was crusty and had puss on it and says it looked so painful.

Chris hands the guest some antibiotics and then goes to get her a blown up raft. He says he doesn’t know how she’ll get it in her car. He has her sit in it by his chair. He asks her to sit with them and hands her a mic. Michelle says she spent long hours day and night on this ocean tank.

She says it’s in Baja Studios that James Cameron built for Titanic and says it makes her 15-year old self swoon because Leonardo DiCaprio swam there. Chris talks about a zoo that was infected and it’s called Zoombies and was zombie zoo animals.

Jericho says he has a fear of sea monsters and would not go down under that boat anyway much less at night and you have to know it’s a zombie. He says he would be waiting with a towel and hot chocolate for them. Jericho says Travis needs to stop listening to Strand.

A caller asks Jericho if he thinks Strand is telling the truth about Mexico. Jericho says no and he’s a subtle bad guy. He says he thinks he’s leading them somewhere for a reason. Chris drags the raft around to give the audience chick a thrill.

Now we see more on the beach shoot and Peter Crosam the VE supervisor is there and Lorenzo says it looks real like an exploded plane. They used some drone photography and Mike Fortin, the drone pilot, describes how they got some different angles with other cameras.

Ruben Blades says they’re really good and it looks like a real plane crash. Chris asks Lorenzo what was creepier the crash site or the infected. Lorenzo says it was so realistic and since he travels a lot, it really creeped him out and says they had the food you would eat on a plane thrown around.

He says the guy who was the one who had to kill was awful and the spine thing looked awful. Jericho says when Strand cut Alex loose it’s the last line of the way things used to be and says Strand and the boat are in the new world of kill or be killed.

Jericho says Strand has no mercy. Then there’s tweets read about how Strand might out-survive the others. Chris reads another that says it his boat and others says “those two just got ‘Stranded’” and they all groan.

Michelle says when Strand cut the rope, Alex feels like it’s false promises and salvation was in her grasp and then he reneged and the rules changed and there is no more humanity. Chris says it’s like right and wrong and you want to help people but then you realize your family is in danger.

Michelle says Strand will have the most enemies. Now a poll – will we see Alex again? Jericho says he likes Alex but she’s dead and gone. Chris calls him a cold bastard but 97% say they will see her again. Jericho says 97% of America is wrong.

Another poll – what’s the worst thing to see infected beach bums wearing – bikini top, banana hammock or fanny pack. 81% said banana hammock. Now a look at next week’s show. We see Nick in the surf struggling against the waves. A bag is tied to his ankle.

He makes it to shore and reels in the bag. It looks like he’s naked. A helicopter is overhead and there are large walls nearby. Is it the safe zone?