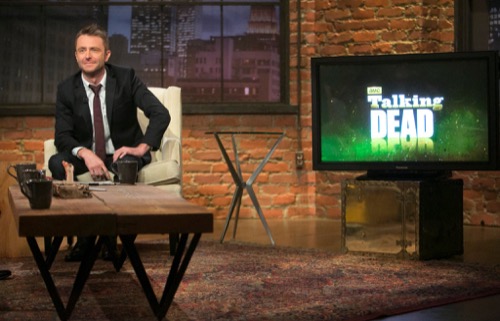 Tonight on AMC Talking Dead returns with an all new Sunday April 17, season 2 episode 2 and we have your weekly recap below. On tonight’s episode, guest talk about “We All Fall Down” episode of “Fear The Walking Dead” is discussed.

Tonight on Talking Dead as per the AMC synopsis, “Kim Dickens (Madison Clark), actor Lou Diamond Phillips and actress Lyndie Greenwood discuss the episode “We All Fall Down” from Fear the Walking Dead. Hosted by Chris Hardwick.”

#TalkingDead tonight has with Chris Hardwick, star of Longmire – Lou Diamond Phillips, Madison portrayer Kim Dickens and from Sleepy Hollow, Lyndie Greenwood. Kim says for Madison, the light was a hopeful moment and says it’s a sign of life and the infected don’t turn lights on and off.

Chris says a lot of people said when Walking Dead started, they said they’d get on a boat. Lyndie says she’d go for the light at this point in the apocalypse since you don’t see The Walking Dead level of cruelty yet. Chris agrees people are real neighborly still. Lou tweeted to come on the show.

Lou says he’s a huge fan and had Walking Dead night at his place in Waterbury where he was doing a play. He says a pal of his, Kid Cuddy, said he tweeted and got on so he tweeted too. Lou says there’s a learning curve with all of this and the world isn’t as it should be. He says Travis is still hanging on.

He thinks Travis’ equivocation is dangerous. Lou says the paranoia is huge. Chris says the family is off from the start. Kim says right away the normalcy of it is odd and says it’s promising but darker in a way. She says the quizzing Madison was suspicious right away. Lyndie says the walkers from the water was cool.

She calls them floaters and says you’d have to watch the tides for floaters depending on the water. Chris calls it a dead tide. Chris mentioned a character death on Sleepy Hollow and she says it was harsh. Lyndie says on Fear, she thinks Ofelia may be the next to go because it would make Daniel crazy.

She says she thinks Daniel would go really dark. Lou says he won’t offer any sacrificial lamb suggestions. Kim says down in Mexico, they hang out after work and drink margaritas. She says they’re great there and says Domiano liqueur is a local ingredient and says it makes you feel good – it’s a hormonal herb.

She defends it saying you’re not supposed to drink the water. Now it’s the In Memoriam for the episode. Endless Summer beach infected are listed and Willa then Melissa and then Infected Melissa. Then it says, lesson learned at firs port of call – they stop being family when they try to eat you.

We see an interview with Cliff Curtis who says it was scary when Travis saw Chris enjoying killing the infected and didn’t know how to help him. Lyndie says Travis lurking around Chris more will not be helpful and controlling him will push him further away since he’s an angsty teen.

Lyndie says she doesn’t know what he can for Chris and says she thought it was good for Chris to kill the floaters and says he’s adapting to the new world. Chris Hardwick says he’s venting some of his rage then says it’s strange that Nick is the best mentally adapted to this world since his life has been insane.

Kim says Madison can’t fathom that much of the country is gone and says it’s so fresh. Chris Hardwick says why not stay at the compound instead of going back to sea. Lou says the survivalist mentality is like Jack Torrance in The Shining. He says you get information so rapidly.

He says Georgia didn’t know about DC and this group here knows major cities and infrastructure is falling apart and the military may not be their friends. Lou says the knowledge they’re gaining is hard to wrap your head around and they know they have to keep moving.

Chris Hardwick says he wishes the government would hold back off for a week or two before napalming the city and Lou says they’re covering their tracks and Chris calls it a zombie conspiracy theory. A caller asks Kim who’s most likely to break character during a take and she says they’re all pretty good.

She says unless they get the giggles then they all dissolve. She says they were in a scary situation and Coleman (Strand) was supposed to grab her arm and grabbed her boob by accident and they all lost it laughing. Chris reads a question asking if Madison is prepared to kill the living.

Kim says she thinks she’s beginning to understand that violence is a necessity sometimes. Now it’s time for the quiz. Here’s the Q&A:

#1 Which animal is on Willa’s sweater? Hippo, rhino or elephant? It was an elephant.

#2 Seth says his family is not survivalists they are what? Self-reliant, naturalists or preppers? It’s self-reliant.

#3 What does Alicia draw on the flyer? A flower, bird or spiral heart? It was a spiral heart.

We next see writer Kate Barnow talking about the lore of Ring around the Rosie being about the Black Plague and Alicia understands the irony of that. She says Alicia wondered if that’s what they’re headed into now. Chris Hardwick reads some reaction to the kids in tonight’s episodes.

One tweeted “look at the seashells” then another complaining why no one watches their kids in the apocalypse and another about a baby zombie eating her mom’s face. Kim says that event was devastating for Madison since Melissa was making a sacrifice. She says Madison was ready to fight Strand.

Kim says the scene was intense with lots of special effects and blood and you hope the kid can get it right. She says the kid was amazing and they were cheering for her that she got in one take. She says Aria is a wonderful actress who said she imagined it like her dog with one of his toys.

Lyndie says it was awful to watch and do that but on the other hand, as a zombie fan, it was awesome. Chris says it’s not a documentary so it’s okay. Lou then says the power pills immediately had him wondering if it was a cure or made them immune. He says the kid knew lots about zombies.

He says the GI Joes with the red dot was amazing. He says when Nick found nothing but Advil and stool softener, it was concerning. Chris says now it’s a poll. Is it Nick’s fault that Willa found the power pills? Yes or no. Lyndie says it’s totally his fault but Lou says he put them back in the globe.

70% say yes it’s his fault. A caller asks Kim who she would choose to survive the apocalypse with and she says her mom who is with her tonight. Lyndie says her dog. Lou says his wife Yvonne. Lyndie then says her BF and adds sorry. Chris says Lyndie and her BF can sort that out later.

Chris says his fiancée has a solid zombie apocalypse plan. He says she told him she would shoot him in a second if he turned. Lou says his wife would have it covered.

Now a look at behind the scenes of tonight’s Fear episode. The director wanted Seth’s ax to be more tool than weapon. Harry was played by twins. Willa was on Mad Men as Pete’s daughter Tammy. Chris portrayer Lorenzo James Henrie says Chris killing infected was a way of healing and processing his anger.

An audience member comes up and asks Kim if she would handle a zombie apocalypse like Madison would and she says no, she’d be terrible. Chris has a little pickax and log book for her then smacks her with the fake ax and laughs and says it’s just foam. Chris says she can come sit in his chair.

Chris then asks Kim about Madison taking the kid. She says it was hard for her to imagine that sacrifice for a mother. Lyndie says Strand has a plan and an agenda and it’s not about helping or hurting anyone else. She says he gave in at the end but then Seth came on board and the poop hit the fan.

Kim says as they pull away, Madison knows there’s no turning back and they weren’t invited to stay anyway. She says she just has to face what’s happening. Chris has the fan sitting there and keeps asking her questions. Lou says Strand being on the phone makes him wonder why he was in containment.

Lou says he also wonders why Strand was so prepared to leave and he wants to know why. Chris hands the fan a card and says she can read the next twitter question. He leans in with his mic and she reads it. They ask if the actors want to be killed before the turn if they were infected.

Lyndie says after so she can see what it’s like. Chris says it might be like an eternal orgasm since they’re always groaning. Now we see Mercedes Mason, Ofelia, talking about her scene with Ofelia talking to Daniel about all they lost and how she knows he’s not a sociopath for what he’s done.

She says Ofelia finally saw him for who he was without judgment. Chris now says tweet Heather, the fan, who helped. Then he people are now calling Strand #boatdick like an homage to Pete the #porchdick from last season Walking Dead. Lyndie talks about Daniel being well-prepared to make hard decisions.

Kim says she and Daniel had some issues but now they’re united in their distrust of Strand. Lou talks about Strand’s gun and maps and says Strand needs to meet someone and get to Baja. Lou says he’s just not sure why Strand brought the merry group along.

The next poll question is should the group have stayed on the island? Lyndie says land is the place where she would want to end it. Lou says land and take the high ground. Chris says he’d go boat since something might be out there. 86% of fans say no, stick to water. Kim has a photo from the set of Cliff Curtis asleep on the set.

She says this was retaliation for him talking about her wearing a sea sickness patch. She says a million people were around yet he was sound asleep. Chris then shows some fan art and encourages people to send more.

Then another poll of best new job for Nick – rescue diver, babysitter or DEA agent? Fans voted for babysitter. Now a look at next week’s episode. Daniel is on a sandy hill and tons of infected begin to come up and over the dunes. He pulls out a pistol. That’s it.

Chris says he got tweets that it was people from Flight 462 that crashed from the little webisodes. Lyndie says she wants to see what happens with Strand and what’s up his sleeve. Chris asks Lou who from Young Guns would survive best and he says no Charlie Sheen but he and Kiefer Sutherland would do okay.

Lou says he wants to see the “why” this season. He says why has this happened and was this a military weapon gone wrong and says he can’t handle the truth.