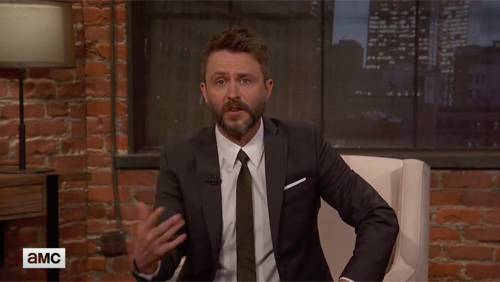 Tonight on AMC Talking Dead returns with an all new Sunday May 15, season 2 episode 6 and we have your weekly recap below. On tonight’s episode, guest talk about the “Sicut Cervus” episode of “Fear The Walking Dead.”

On the last episode Talking Dead host Chris Hardwick sat down with Alycia Debnam-Carey (Alicia Clark) and two surprise cast members discussed the episode “Captive” from Fear the Walking Dead. Did you watch the last episode? If you missed it we have a full and detailed recap, right here for you.

We will be covering the Talking Dead tonight so don’t forget to bookmark this spot and come back later.  While you wait,  let us know how excited are you knowing that both Fear The Walking Dead and The Talking Dead are back? Sound off in the comments down below!

#TalkingDead tonight has Mercedes Mason (Ofelia), comedian Jim Gaffigan and Tamara Mowry-Housely along with host Chris Hardwick. Chris talks about pouring a cup of coffee in Mercedes’ lap before the show and says he feels terrible.

Mercedes says at least she had a second outfit. Jim jokes about her bringing backup pants. Chris asks about Ofelia’s journey. Mercedes says she has a big arc since season one and was a mouse under her dad’s thumb and the daughter of immigrant parents.

She says in season two, she was shot by her crush, lost her mom, doesn’t trust her dad and she’s silent a lot. She says now Ofelia is growing a sack little by little. Chris says Daniel is over-protective and that’s not good in this world. Mercedes agrees.

Chris says Daniel doesn’t want Ofelia to live the life like he had. Tamara says Daniel’s paranoia can be contradicting like when he found the map and knew that Strand was lying but then stole the clip so Strand couldn’t protect them and needs to calm down.

Chris says the churchyard massacre was amazing and seeing Mercedes stab an altar boy. She says she loved doing that. Jim says Daniel’s flashback to choking the kid had him wonder if that was him as a boy or was he choking the boy.

Jim says Daniel is more prepared for this world considering what Daniel’s dark past must have been like. Jim says he thinks it was Daniel as a boy that made him who he is and who he is as a father. Mercedes says the flashback will be explained in the next episode.

Jim says when he was talking to his wife, it was strange and Tamara says he seems to be hearing things. Mercedes says Ofelia saw the mansion as hope because they thought the world had fallen apart. There’s food and they can get clean and there are kids playing outside.

She says everyone but Daniel was super-excited. Now the In Memoriam. We see The Poisoned Parishioners, The Infected Parishioners, Flotilla Guards, Luis, Thomas Abigail. Looks like Strand’s last obligation to Abigail was keeping him out of the wine cellar.

Now we see Cliff Curtis (Travis) talking about the hacienda and how the vineyard is calm and peaceful except for the basement full of dead people. Chris reads some fan comments about the estate – it’s Terminus de le Cinco.

Chris says it’s like a nod to Hershel’s farm with the people there. Jim says it’s a red flag that Celia was so welcoming and Mercedes says it’s like Hansel and Gretel. Tamara says she doesn’t trust Celia either and she has a way with people that’s cultish.

She says it’s like witchcraft and then she knew something was up and she was like no big deal my son is dead so long as you didn’t shoot him in the head. Tamara says Celia has crazy in her eyes. Jim says there’s the Day of the Dead aspect and saw the animated movie Book of Life.

Chris starts laughing at him and Jim says because I am Mexican… He says he was worried about Nick eating the pasole and says it’d be great to be somewhere in the apocalypse where the food is good. Chris asks Mercedes about the death cellar.

She says it’s like they are the last sane people left and there is not the hope that they thought was there and hopes that Daniel tells them what’s going on. Jim says Celia’s outlook that they just need rest and to be fed a dog occasionally and it’s fine.

Chris asks how long the group can stay in the death vineyard. Tamara says there’s never a safe haven. Jim says he’d need sunscreen there or on the boat and says he doesn’t like fish – it’s disgusting and there’s trouble out there.

Chris asks what amenities do you need. Tamara says margaritas are nice like they have but needs good. She says you can’t fight without food. Jim says they had wine and Mexican food and he’d stay there. He says the priest was going to get Celia and there’s problems there.

#1 What is on the coin Luis gives Daniel? A snake, a beetle or an owl. The answer is owl. It’s a symbol of Santa Muerta, a Mexian folk saint who is a personification of death.

#2 The priest says that Evil wants people to turn away from what? Charity, hope or faith. The answer is Faith. Chris has the weapon called a priest that Daniel used to club the eel.

#3 What does Celie feed Nick in the kitchen? Paleta, Pozole or Panucho? The answer is Pozole. It is a traditional soup or stew associated with celebration.

Colman Domingo (Strand) talks about his agreement with Tom Abigail and says now that Tom has gone, he needs to make a new agreement. Strand says his obligation was to take care of Tom and take him out of his misery.

Chris reads fan comments about how they saw Strand as a real person and another comments on Strand crying like Daryl crying. Jim says Daryl is dreamy. Tamara says Strand knows that he has work to do and told Tom that he would go with him so Tom would let go.

Tamara says Strand knows how crazy Celia is and Chris says Strand lied to Tom when they first met and again in their last moment. Jim says Colman has the most incredible voice. Then they talk about Chris and his issues with Madison.

Jim says maybe Chris went into the bedroom to sharpen their knife for them. A fan says Chris has gone “in-Shane.” Another says dude needs to get it together. Another says Chris is nuttier than squirrel poop. Tamara says he’s trying to figure things out.

He says his mom is gone and his dad shot her and he doesn’t know who to trust. Jim says Chris threatened Alicia very politely. Now a poll – who’s the craziest – Celia, Chris, or Daniel. Jim says it’s Celia and Chris is doing fine.

Kim Dickens (Madison) says when she brings the food to the guys, she saw genuine care between the men. She says none of them knew their story and she went in and it played between Madison and Strand and says it shows Madison and Strand care about each other.

A caller asks Mercedes if Daniel got bitten, could Ofelia put him out of his misery. She says no and she would go apeshit if she lost her dad since she’d have nothing left. Jim says he thinks Madison can hold the family together for about an hour more.

He says Madison needs to step up and support Travis since he’s been there for her. Jim says she needs to be compassionate about her stepson possibly turning into a sociopath. Tamara says Ofelia did talk to Nick about Jesus and says he’s very positive in this world.

Mercedes mentions that the only connection Ofelia has to any of the others is Nick. Chris says he thinks Chris might have a crush on Ofelia so it might be a crush triangle. Now a poll question – do you ship NickOfelia? Jim says he has no idea, maybe.

Jim says why can’t he show up on Fear the Walking Dead since he’s on Talking Dead like Alex crossed over from Flight 462. He says that’s why he’s there. 81% say they ship NickOfelia. Now some fan tweets. Zombie altar boys, I’ve seen it all now. Thanks.

Now we see behind the scenes at the church massacre. Colman Domingo says it’s an incredible scene about survival. Ruben Blades (Daniel) says it’s a lot of stunt work and a complicated scene. Stunt coordinator Randy Hall says there’s an arc and tempo just like an acting scene.

Chris mentions the owl coin and the death saint. He reads some owl puns including that the show was a “real hoot.” An audience fan comes up to ask a question. She asks Mercedes what it was like filming the fight scene.

Jim says he thought the owl coin meant he liked to go to Hooters. They show a pic of Mercedes with the pile of corpses and says she had to take the photo of them. Tamara says she liked the group coming together and kicking butt. Then she says Chris ruined it.

Now a poll – what’s the worst thing about the Abigail estate? Poisoned wafer, stinky Nick or wine cellar of the dead. 84% say the cellar.

A look at next week’s episode with Celia ranting because Strand wants to bury Tom and says Tom wanted Strand to die with him and she calls him her son and Strand says Tom is not her son. Nick tries to calm Celia down and then says Strand will let the boy do her begging. Celia says they have one day to leave.