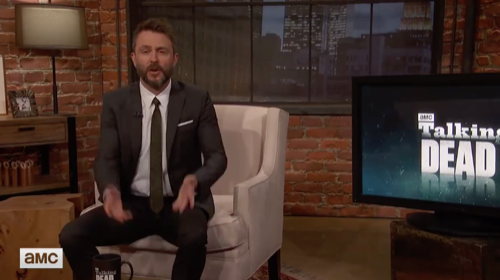 Tonight on AMC Talking Dead returns with an all new Sunday May 8, season 2 episode 5 and we have your weekly recap below. On tonight’s episode, guests talk about “Captive” episode of “Fear The Walking Dead.”

On the last episode of the Talking Dead host Chris Hardwick sat down with L Colman Domingo (Victor Strand) and actress/superfan Yvette Nicole Brown and they discussed the episode “Blood in the Streets” from Fear the Walking Dead. Did you watch the last episode? If you missed it we have a full and detailed recap, right here for you.

#TalkingDead tonight has Alycia Debnam-Carey (aka Alicia), Jesse McCartney (aka Reed) and Daniel Zovatto (aka Jack) all from tonight’s episode. Chris Hardwick asks Alycia if Alicia feels vindicated that Alex was to blame and she says she saw the poll last week that blamed Alicia.

She says for Alicia, it was a relief, and they can blame Strand too. She says Alicia had to feel relief that it wasn’t all on her. Chris asks her about the steak scenario and she says she loved that scene and says the steak was good. She says she loved it because it was so sensory.

She says there were weird moments like the skiing video playing and says the set was on a real fishing boat – a tuna boat – and says the kitchen was grimy and cool. Daniel says Jack’s intentions are good but he’s surrounded by people who aren’t so good.

He says Jack is trapped with some bad people and he’s doing things he wouldn’t otherwise do. Chris tells Jesse he was so great on the show and he’s sorry he got killed. Jesse says he didn’t know he’d be playing a villain because they don’t tell you anything up front.

He says when he made it to set and they handed him guns, he says he knew he wasn’t going to be great but liked playing an apocalyptic pilot and says the last thing he played was a sweet boy next door. Chris asks Alycia if she knew Jesse before this.

She laughs and says he was a teen heartthrob when she was 10 and says before he came on set, everyone was talking about him on set. She says she worked up the courage to tell him that she knows all the words to Beautiful Soul. Daniel says everyone knew she was all about it.

Now the In Memoriam. We see Reed, roughneck on the boat, Connor. Connor went from cooking up meat to being the meat.

Next is Carla Ching, one of the writers, and she talks about the episode and how several are trying to make up for past wrongs including Travis, Alicia and Chris. Chris reads some reactions and says the Alicia-Jack chemistry was hot damn others wanted her to throw him off the boat.

Jesse says Connor is a safe haven for Reed as his big brother. He says Reed loves him but doesn’t have much of a moral compass. Daniel says for Jack, this is a new world, and he was looking for people on the radio and he and Alicia talked and were relating to each other.

He says Jack was intrigued by her. A fan asks on Twitter if Alicia liked Jack or was manipulating him. Alycia says that’s the reaction she wanted fans to have – to achieve that ambiguity. She says Alicia’s main goal was to get back to her family and wouldn’t be swept off her feet.

Daniel says Jack is sad and she jumps and he’s confused that she just left. Chris says he told his fiancée that she should have stabbed him in the neck because he might come back for her and says he’s learned that from watching The Walking Dead for years.

#2 What was plating on the TV in Connor’s kitchen – skiing, wrestling or ice hockey? The answer is skiing.

#3 Strand tells Luis, “everything is a ___” is it compromise, dance or negotiation? The answer is negotiation.

We see Lorenzo James Henrie talking about Chris shooting Reed. He says Reed said something about his mom that made him pop him but it wasn’t shown on screen. He says Chris lied and said he was going to turn to rationalize what he did.

Jesse says Reed sensed weakness in Chris and this was business as usual for Reed and was another day at the office and was looking for the most vulnerable person and saw a quarry in Chris because of his relationship with Travis.

He says Lorenzo is the sweetest guy on the planet and he had to shove guns in his face. Chris says Reed was trolling and he loved the line where Daniel says that the most frightening men never talk about how scary they are.

Alycia says Reed’s face was gross when it was blown off and loved Jesse’s Achilles tendon monologue. Chris says Mark Kelly, who played Connor, did a great job. Jesse says it was a long process for the special effects make up and about two and a half hours to get it on.

Jesse says it takes 10 minutes to get it off but the blood stains you and he was in the airport getting looks. Now a poll – was Chris wrong to kill Reed? Yes or No. Daniel says Reed got what was coming to him but loves Jesse. He says Reed is a douchebag. 72% say Chris was not wrong.

A caller asks Alycia if she feels like Alicia thinks Madison is being absentee parent because of the attention she gives Nick. Alicia says yes and they will explore that more this season. She says Madison is there when no one else is around and why Alicia talked to Jack and is left on her own.

Now we see some Inside the Dead info on the episode. Cliff Curtis (aka Travis) takes his stunt work seriously and we see that. The episode was shot on two tuna boats. Mercedes Mason (aka Ofelia) tasted the fake blood and said it was bitter, disgusting and sticky.

Now we see Mercedes Mason talking about Reed being shot by Chris and says Nick and Ofelia, the pure souls, clean up the mess. She says Ofelia is starting to understand the new world but Nick doesn’t want her to go to the dark side and follow in her father’s footsteps.

Now a fan from the audience comes up and asks Alycia if she thinks Alex was justified in giving them up. Alycia says good question and says yes. She says this world has a new set of rules. She says she wanted to help Alex. She says there was a scene cut out where Alex and Alicia talk.

She says it was Alex going to help her try and get out. Chris gives the fan a hostage with his head in a bag – looks like zombie Reed. Chris says he shot him for talking about his mom. He says she doesn’t have to give him Travis and can just take him and go.

Jesse says the bag on his head was hot and he was tied up. He says they hope the trade goes well and it doesn’t for Connor. He says when they were shooting, the bag comes off and Connor freaks and he bites his brother. He says they had one take.

He says it went well and says it tasted like bad syrup and wasn’t fun and he still has stuff in his teeth. Daniel says he was jealous he didn’t get to be a zombie. He says he called his mom and asks if he’s going to die since he usually dies in most of his roles.

Chris asks if we’ve seen the last of Jack. Daniel says I don’t know and Alycia knows more than he does. He says Alex is still around and isn’t happy with them and Jack isn’t ready to let Alicia go. He says maybe they’ll see him.

Now a behind the scene look at the episode where Mark Kelly (aka Connor) talks about shooting on the tuna boat down in Mexico. He says they grounded the boat for the shoot. Alycia says her stunt double Whitney jumped off the boat. She says she dropped onto piles of cardboard boxes.

They practiced with a dummy to frame up the shot then did it one take. A fan asks if Strand trusts Madison now she saved his life. Alycia says there’s still too many secrets between them. She says that’s how Strand operates and Madison too.

Chris asks where they’re from. Alycia is from Australia and Daniel from Costa Rica, and Jesse is from New York. Now another poll – did Alicia prove she’s ready to survive the apocalypse? 93% say yes. Next is another poll.

Jesse says they don’t know what voice that was Daniel was hearing but he’s apprehensive about all of this and wants to protect Ofelia. He says he thinks Daniel’s past is part of this. Alycia says Alicia finally killed an infected in episode 3 and is driven by compassion.

She says killing a human would be hard. Chris tells her you never want to become the moral compass but Alycia says she’s sure it’s inevitable.