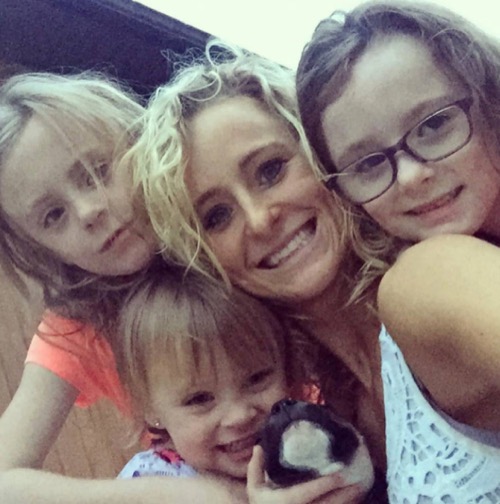 Tonight on MTV their series Teen Mom 2 continues with an all new Monday March 28, season 7 episode 2 called “In The Dark” and we have your weekly recap below. On tonight’s episode, Jenelle Evans tries to charge Nathan with kidnapping when he takes Kaiser on an unexpected trip.

On the last episode, in the Season 7 premiere, Nathan threatened Jenelle with felony charges; Leah received sad news about Ali while waiting on the decision in her custody case; and Kailyn attempted to rebuilded her relationship with Jo, but hurt things with Javi. Did you watch the last episode? If you missed it, we have a full and detailed recap right here for you.

On tonight’s episode as per the MTV synopsis, “Jenelle tries to charge Nathan with kidnapping when he takes Kaiser on an unexpected trip; and Leah awaits word from the court about the custody case.”

It sounds like Teen Mom 2 is going to have another amazing season and will be an awesome show. What kind of crazy drama are you expecting to see in this current season? What has been the most exciting part so far in Teen Mom 2? Sound off in the comments down below and let us know how excited you are about this new season! Don’t forget to check CDL for this live recap of Teen Mom at 10PM ET!

This week on Teen Mom 2 Janelle feels overwhelmed by taking care of Kaiser even with Tori’s help so she calls Nathan to see if will come and pick him up for a bit.

Chelsea is out with Aubree and Cole. Aubree starts to get upset in the car when she asks Chelsea how to make the number two and Chelsea tells to “Wait until they get home so that I can help you.” Aubree continues to cry and Cole tells Aubree that she has to “Listen to her mother.” Chelsea tells Cole thank you and he says “That’s how I was raised.”

Kailyn is still dealing with the fallout from her fight with Javi when they went to take family pictures. She is at home with Lincoln and calls her friend to tell her what happened. Her friend asks her “Do you know why Javi doesn’t like them?” Kailyn says “I have no idea.”

Leah is still struggling to deal with the news of Ali’s Drs. appointment as well as waiting to hear about the results of the custody hearing. Her friend comes to visit and asks Leah what happened at the Drs. appointment. Leah tells her “The Dr. said that her muscles will start to deteriorate by the time she is seven and she is just getting ready to turn six,” Her friend says “She will end up in a wheelchair. How else will she get around?” She then asks how Corey reacted when Leah told him. Leah says “He was there. They took her wheelchair so they could fix it.”

Chelsea is out to lunch with her friends. She asks Chelsea how Aubree is liking Kindergarten and Chelsea says “She loves it.” Then they move on to talking about the relationship between Aubree and Cole. Chelsea tells her “Cole is super respectful and I think it is super important for parents to have that.”

Janelle is upset because Nathan has taken Kaiser out of town with Nathan. Janelle is angry that Nathan took Kaiser to Boston with his girlfriend, the woman who is pressing charges against Janelle. She tells Tori “I am going to pick up Kaiser on Sunday and I am just going to wait. If Nathan wants to see his son again he can take me to court.

Leah calls her lawyer to find out what is going on with the custody ruling. Her lawyer Lynne tells her “There is no ruling yet and when we know something we will call you. Jeremy brings Adalynn home and the two sit and talk. Jeremy asks her when she was going to court with Corey and Leah tells him “We’ve already been to court and now I am just waiting on a ruling.”

Isaac and Lincoln are at home with Kailyn and Javi. Kailyn tells him that Vee is in labor and she is going to take Isaac to meet his sister when she is born. Javi tells Kailyn “I have to tell you that I may be going overseas soon.” Kailyn asks him “For how long? When do you leave?” Javi tells her “I will know in a couple weeks and usually the tours are about three to six months.” Javi then tells her “I want to spend the time I have left at home with those I love and am close to. I don’t want to fight with you about Jo.” Kail agrees and says “I don’t want to fight with you about dumb stuff either. Let’s just focus on us and how we are going to tell the kids about you leaving.”

Chelsea gets texts from Adam about changing the custody agreement but refuses to discuss it without a lawyer. Adam buys a house. He is showing off the house to his dad and shows him his license. He then tells his dad about the conversation he had with Chelsea about custody.

Janelle speaks with a lawyer about the situation with Kaiser and finds out that she can’t stop him from taking Kaiser out of town. She meets with Barbara and Jace to have lunch. Janelle asks how Jace has been behaving at home and Barbara tells her “He has been throwing things at me at home.” Janelle scolds Jace for the bad behavior. Janelle then tells Barb about the situation with Kaiser. Barb tells her “Have your lawyer write you up a piece of paper that says that you have primary custody.” Janelle tells her “I talked to his parents and told them that they need to have Kaiser by 12 noon and that’s it.”

Kailyn and Isaac are in the car and Kailyn asks Isaac if he wants to call his daddy and see if he can visit his new sister ViVi. Jo tells them to come on over. Kailyn tells Isaac that she was born yesterday. Isaac asks “How old is she?” Kailyn says “She is one day old.” and Isaac laughs.

Leah is on the phone with her friend and they are talking about the custody battle. Leah tells her “I’m worried about the custody hearing and I don’t want to talk about it because it causes my anxiety to kick up.” Her friend tells her “No matter whether he gets them or you get them keep a calm head.”

Kailyn and Javi are having dinner with the kids. Isaac is being difficult about eating his Broccoli and Kailyn tells him “Remember Santa is always watching to see whether or not you are being good.” Isaac tells her “I can’t see him.” Kailyn responds “You don’t have to see him for him to be watching.” When Isaac continues to be difficult Kailyn threatens again to call Santa and asks Javi for his phone. Javi laughs and says “No.”

Chelsea is talking to her dad and tells him that Adam is going to fight her for custody of Aubree again. Chelsea is worried about the fact that Adam may get more time and unsupervised visits. Randy, Chelsea’s dad, tells her that they need to modify the child support and he shows her that he brought all the papers.

Janelle and Tori are on their way to pick up Kaiser. When Janelle puts Kaiser in his car seat she notices that Nathan’s girlfriend has cut the little boys hair. Janelle is angry and says “That’s his first haircut and I wanted to be there and take pictures.” Janelle calls Nathan and tells him “You took it upon yourself to take my child to Boston without permission and have Jessica cut his hair without permission. I’m changing my phone number right now and if you want to see my son you can go through the court.” With that Janelle hangs up the phone.

Isaac is with Jo for the weekend and he is spending time with his new baby sister. Isaac has drawn a picture of Jo, Vee, him and Vivi. Kailyn and Javi are talking about the possibility of having another baby. Kailyn tells him “It’s hard when I am in school until three and then have to come home. make dinner and bathe two kids.” Javi tells her “You just have a lot on your plate. I don’t know how you do it.”

Leah is still struggling with no word about the custody hearing. She calls her mom and asks her to go pick up the girls. Corey’s lawyer gives him the new custody order. The lawyer tells him that he got what he asked for and that he is now the primary custodian for the twins. Corey tells him ” I didn’t really expect for it t happen but for the girls sake I am tickled that it happened this way because I want the girls to have experiences and be able to talk about college.”