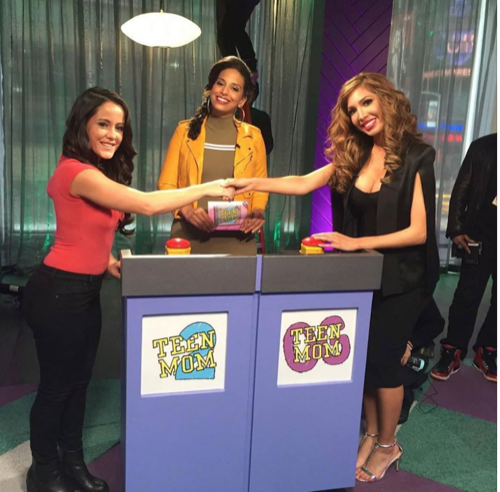 Tonight on MTV their series Teen Mom 2 continues with an all new Monday April 25, season 7 episode 7 called “Man of The House” and we have your weekly recap below. On tonight’s episode, Javi Marroquin says goodbye to his family prior to his deployment; Jenelle Evans meets with Nathan Griffith, which fuels David’s jealousy.

On the last episode, Leah considered reuniting with Jeremy; Isaac struggles with Javi’s impending deployment; Jenelle’s birthday trip to New York was ruined by Nathan. Did you watch the last episode? If you missed it, we have a full and detailed recap right here for you.

On tonight’s episode as per the MTV synopsis, “Javi says goodbye to his family prior to his deployment; Jenelle meets with Nathan, which fuels David’s jealousy; Corey and Leah square off at Ali’s doctor’s appointment; and Chelsea and Cole debate changing Aubree’s last name.”

This week on Teen Mom 2 Janelle and David get into a huge fight when she tells him that she is meeting up with Nathan to discuss the possibility of Nathan’s girlfriend Jessica dropping the assault charges if Janelle will sign papers giving him visitation rights with Kaiser. Janelle asks David if he wants to come along and he tells her that it is his call. Janelle then asks him if he wants to be sitting at the table with them or watching from a distance. Janelle tells him “I did tell him that you wouldn’t be there.” This upsets David and he says “I don’t know why you have to meet with him to talk about the situation anyway. You’re with me now and he needs to respect that. If he starts to act out then I will let him know that the behavior is not acceptable.”

Leah meets up with her friend and they take the kids to the park. Ali, Aleeah and Adalyn are all playing on the playground and Leah is talking to her friend. She tells her “Jeremy and I met up and talked about the possibility of getting back together.” Her friend is shocked but Leah quickly tells her “I don’t want a boyfriend or to date anyone. I’m just not ready.” All of a sudden there is a loud scream and Leah looks over to see Ali on the ground after she has fallen off the swing. Leah rushes over and picks Ali up to comfort he as Ali screams in pain.

Chelsea is dealing with an injured Aubree. Once she calms Aubree down she sits down and talks with her friend. She tells her “I can’t believe I am getting married. “ Her friend laughs and tells her it is really happening. Chelsea says “We have a court hearing for child support.” Her friend is shocked and wonders how Adam gets away with things. Chelsea says “He doesn’t pay for months and then he pays one big chunk.”

Kailyn is making a video for Javi in preparation for his shipping out. She tells both Lincoln and Isaac to come say something on the video. Neither child really wants to.

Nathan is talking to Jessica about Janelle contacting him about visitation with Kaiser. He tells Jessica “I guess she thinks that we will drop the charges if she lets me see Kaiser, but that is not going to happen.” Jessica laughs and agrees with him. Nathan goes on to say “She doesn’t want you there because she says you are a danger.” Jessica thinks this is outrageous. He also tells her that David won’t be there. Nathan then tells Jessica “He was allegedly arrested for domestic violence and possession of drug parephanelia and this is the man she has around my son.” Jessica says “That is outrageous.”

Adam is talking to his dad about the custody situation with Aubree. He tells him “All I want is the same agreement I have with Taylor about Paisley. I don’t know why she won’t agree with that.” Adam’s dad tells him “You just have to do what needs to be done.”

Kailyn and Javi have a party so that he can celebrate and say good bye to the people he is close to before he is deployed. At the party Kailyn shows the video she made with the kids and everyone cries.

Leah takes Ali to the hospital and Corey and his parents meet her there. The Dr. asks how often Ali falls down and Leah tells him three or four times a day. He also asks if Ali can catch herself and Leah tells him “No she just drops straight down.” After the appointment is over they are talking with the nurse and she asks them if there have been any changes to the custody agreement. Leah tells her “The girls are with Corey Monday through Friday and with me Friday through Monday.” She also tells the nurse that they are going back to court to reevaluate custody in January. Corey looks stunned and says “I thought it was February.” Leah tells him again it is in January.

David and Janelle are still arguing about the meeting with Nathan. Janelle asks him again if he wants to go and he says “No, you told him I wasn’t going to be there.” Eventually he ends up deciding to go with her. While they are in the car they are discussing what Janelle wants from Nathan. She tells David “He’s telling people I won’t let him see Kaiser and that’s not true. He doesn’t even have a car seat for Kaiser and Kaiser won’t have his own room because Nathan lives in a one bedroom apartment.” Dacid says “Make sure you put that on your list, that he needs to get a new apartment.”

Chelsea and Cole are discussing Aubree’s last name. Chelsea worries that Aubree won’t feel like she is part of their family since she doesn’t have the same last name. Cole says “That’s understandable.” Chelsea makes a decision and tell Cole “I am going to talk to my lawyer and see about hyphenating Aubree’s last name so it’s ours and her dads.” Cole tells her “That’s a good idea.”

After the party Javi and Kailyn are back at the house. Kailyn asks Javi “Did you have fun? Was it everything you wanted?” Javi says “Yeah, everyone I wanted to be there was there and I had a good time.” Kailyn also tells Javi “The one thing I was worried about is during the miscarriage that you wouldn’t be supportive of me due to the stress you were under.”

When they get back from the Drs. office Corey is really upset and tells his friend “Leah told the social worker about the court date in front of Ali. She didn’t need to hear that. When we go to court she is going to make it seem like I am the bad parent and she is where they need to be.” Corey’s friend tells him “All you can do is what you’ve been doing and keep doing the right thing.” Corey agrees.

Janelle and Nathan meet up to talk about Kaiser and visitation and Janelle tells him “If you would just show me what you have for him then things would be ok.:” Nathan gets angry and tells Janelle “What you are doing is parental alienation.” Janelle asks him “Do you have a high chair and clothes and things like that for him?” Nathan tells her he does. Then he tells her “You are not a good parent because you are living with a felon who just got out of prison for domestic abuse.”

Janelle says “He was never convicted.” Nathan tells her it doesn’t matter. Then he asks if he can come and bring some presents to Kaiser on Christmas day. Janelle tells him it would be fine. She then goes on to talk to him about the impact that the charges will have on her life. She tells him “I can’t sign up for the surgical program or anything else and I am just trying to be a better person.” Nathan tells her “I’ll talk to her about it.”

Chelsea talks to her dad about the child support situation. She tells him “They sent him a notice in the mail so if he doesn’t show up then I should be able to get everything in my favor.” Randy laughs. She also tells him that she asked the lawyer about hyphenating Aubree’s last name. She tells him “The lawyer said it would be better to wait until we start having kids.”

Javi is leaving for deployment. He and Kailyn say a heartfelt goodbye. She tells him “Six months will fly by and you’ll be home before you know it.” Javi hugs her tight and then he turns to the boys and they all embrace Javi cries as he drives away.