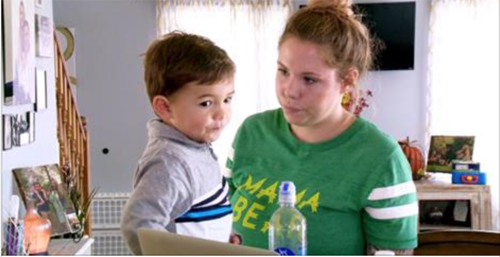 Tonight on MTV their series Teen Mom 2 continues with an all new Monday April 4, season 7 episode 3 called “Breaking Apart” and we have your weekly recap below. On tonight’s episode, Leah Messer learns the outcome of her custody case; Kailyn Lowry and Jo Rivera’s renewed friendship is threatened by a huge fight.

On the last episode, Jenelle tried to charge Nathan with kidnapping when he took Kaiser on an unexpected trip; and Leah awaited word from the court about the custody case. Did you watch the last episode? If you missed it, we have a full and detailed recap right here for you.

On tonight’s episode as per the MTV synopsis, “Leah learns the outcome of her custody case; Kailyn and Jo’s renewed friendship is threatened by a huge fight; Jenelle introduces her new boyfriend to Barb; and Chelsea is upset by Adam’s online behavior.”

It sounds like Teen Mom 2 is going to have another amazing season and will be an awesome show. What kind of crazy drama are you expecting to see in this current season? What has been most exciting so far in Teen Mom so far? Can’t wait for tonight’s episode, it’s going to be amazing? Sound off in the comments down below and let us know your thoughts! Don’t forget to check CDL for our live recap of Teen Mom 2 at 10PM ET!

This week on Teen Mom 2 Chelsea is meeting with a lawyer to talk about increasing Adam’s child support. She sees a post of Aubree and she asks her friend if she is being inappropriate to think that the post is wrong. When she asks Adam to take down the post he tells her “There is nothing inappropriate.” Her friend tells her even though he has a house and a job he is still immature and making bad decisions.” Chelsea says “I seriously hate him.”

Javi goes to Isaac’s school to have lunch with him. When he gets home he tells Kailyn that Isaac told him that he hadn’t had a bath and was scratching his head. Kailyn texted Jo to address the situation and Jo tells her that “Javi should worry about his own kid.” When Kailyn calls him to talk about it he apologizes. Kailyn tells him “No one is bashing you. I understand that you are up all night with the baby, but the way Isaac is dressed is a reflection of us as parents.”

Janelle is excited because she met a new guy on Tinder. She tells Tori about him and shows her pictures of the guy whose name is David. She tells Tori that “He is a family man with two kids of his own.”

Leah heads off with her friend to drop the girls off to Corey. She tells him “I am tired of living my life in a constant state of war and feeling like I am always at war.” Her friend tells her “Corey should stop worrying about you and focus on what’s best for the girls. They get there and drop off the girls to Corey. As they get back in the car Leah is sad and she tells him “I have a feeling my girls aren’t coming home tomorrow.” Her lawyer has called and asked to see her about the custody agreement.

Kailyn and Javi go to pick up Isaac and Kailyn and Jo get into an altercation. Kailyn tells Jo “I am not okay with you not having your life together and looking a mess.” Jo tells Kailyn “You have no right to criticize my appearance in my own house. That’s why I threw you out of my house.” Kailyn tells him “Look at how you’re talking to me right now.” Jo fires back “I’ll talk to you however I want in my own house.” When Kailyn finally gets Isaac to the car he is upset and this causes Javi to get involved. Javi tells Jo “You need to worry about your son.” Jo fires back again telling Javi to worry about his own kid and Javi tells him “I’m obviously more worried about your son more than you are.”

Janelle, David, Jace and David’s daughter are hanging out for the day and everyone seems to get along really well. Janelle tells David “I was looking to date someone but not jump into a serious relationship.”

Corey is talking with his friend and tells him that he got primary custody of the girls. His friend says “I’m glad you got them because now they’ll have a stable home.” Corey says “The court looked at the records and made its decision. They don’t change custody for no reason and Leah knows what the reasons are.” Leah talks to her mom and tells her “I meet with my lawyer tomorrow and find out what the ruling was and I am freaked out and scared.” Her mom tells her “Of course you’re scared.” Leah then tells her mom “It’s like losing part of yourself and I just have a bad feeling I won’t get my girls back tomorrow.”

Chelsea meets with the new lawyer and she tells her there is nothing she can do about the photo he posted. Chelsea calls her dad to talk about the situation. She tells him “I’m just going to let the lawyer handle the child support situation since that’s what I’m seeing her for.” She also tells Randy “I am not going to persue the whole visitation thing.”

Kailyn talks to Isaac about the fight he overheard between her and Jo. She tells him “I love you very much and your daddy loves you very much and I don’t want you to talk to people the way your daddy talked to me.” Jo tells Vee about the fight between him and Kailyn. Vee tells him “This is just ridiculous.” Jo says “She just wants to feel superior and put people down. I have worked to make communication better between me and Kail and she goes and blows it all up.” Jo also says “This is not why I moved to Delaware. I moved here to give Isaac a better life, not a worse one.”

Janelle takes Jace home the next day and she is bringing David to meet her mom. Janelle tells him “I’m scared. “ She worries about how her mom is going to react to him. When they get there Barb asks David what he does for work. He tells her “I’m a welder.” Barb then tells him “Janelle is a very caring person to everyone but me.” Then Barb tells her “I am going to Asheville to see your brother and Jace wants to come.” Janelle says “No. I wanted Jace to be with me.” She then asks Jace whether he wanted to be with her or if he wanted to go with his grandmother. Jace says he wants to go to Janelle’s house. Barb says “How about I come over early and we open gifts early then head out.” Janelle and David agree to this.

Leah goes to her lawyer and gets the bad news that she has lost primary custody of the girls. When she gets back into the car and her friend asks what happened she tells her that the judge has reversed the custody order. She asks Leah how she feels and Leah says “It’s really messed up.” Leah then breaks down and starts to cry.

Kailyn is siting downstairs when Javi comes into the room and asks her “What’s going on?” Kailyn tells Javi “I was just thinking about what happened at Jo’s house. No one should get that mad about someone showing up early.” Javi agrees and tells Kailyn “That is not how a man should talk to a woman.” Kailyn then says “You do more for Isaac than Jo ever has. Isaac tells you he wants to be like you and work with you.” She then says “You don’t have a job or go to school and you get mad at me.“

David and Janelle leave Barb’s house and David tells Janelle “I’m not crazy about going to Asheville for Christmas day, but if that’s what you want to do then i’ll do it.” Janelle tells him “I don’t really want to go, but if I call her and tell her that she’s gonna go ballistic.”

When Leah and her friend get home she is very upset. Her friend tries to get her to call Corey and talk to him. Leah says “I’m not calling him. He wants a reaction and I am not going to give him one right now.” She then tells her friend “This is not fair. I can’t understand why the judge reversed custody.” Her friend says “Well you have to abide by it.” Leah tells her “No I don’t. My lawyer is filing a motion to have them review the decision. “ Her friend says “Well you do until you go back to court.” Leah lays on the couch and cries heartbroken. Then she says “Well I guess you can’t win all the time. Sometimes you have to take some losses. I just hate being engaged in a war with two children in the middle.”