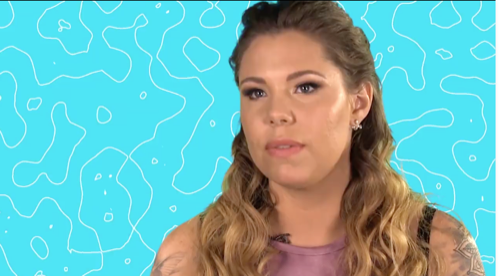 Tonight on MTV their series Teen Mom 2 continues with an all new Monday May 2, season 7 episode 8 called “Didn’t Mean It” and we have your weekly recap below. On tonight’s episode, Leah Calvert and Corey Simms square off in court over custody of the twins.

On the last episode, Javi said goodbye to his family prior to his deployment; Jenelle met with Nathan, which fueled David’s jealousy; Corey and Leah squared off at Ali’s doctor’s appointment. Did you watch the last episode? If you missed it, we have a full and detailed recap right here for you.

On tonight’s episode as per the MTV synopsis, “Leah and Corey square off in court over custody of the twins; Jenelle agrees to let Nathan see Kaiser; and Kail struggles to help Isaac, who misses Javi.”

It sounds like Teen Mom 2 is going to have another amazing season and will be an awesome show. What kind of crazy drama are you expecting to see in this current season? What has been most exciting so far in Teen Mom so far? Sound off in the comments down below and let us know what your thoughts are on season 7! Don’t forget to check CDL for our live recap of Teen Mom 2 at 10 PM ET!

This week on Teen Mom 2 Kailyn is having issues with Javi’s deployment. She says “We are all having trouble adjusting especially Isaac, but he has had access to WIFI so he has called every night.” She is talking to her friend and she asks Kailyn “How hard was the goodbye between you and Javi?” She tells her “It was hard but we are adjusting to the routine without him.” Her friend tells her “You guys are getting used to being without him.” Kailyn says “Lincoln isn’t really impacted by Javi’s being gone. If he hears the phone ring he’ll say daddy, but Isaac has breakdowns out of nowhere.”

Leah is still dealing with the custody issue with Corey. She has gotten Ali’s wheelchair fixed and is happy to have that. When Leah comes home with Adalynn the girls are playing. She tells Ali that her chair is ready and she sits in it. Leah tells them “Now Ali can sit at the table with the rest of us.” Ali says “I want to use it.” Leah tells her “You can use it whenever you need to, but you need to try and walk first. You always need to use what you have.”

Janelle allows Nathan to see Kaiser, but she has David take Kaiser to meet Nathan. Barbara lets Janelle have Jace and when David returns with Kaiser she asks how the visit went. David tells her “It went fine. He talked about himself and the gym.” Janelle says “That’s all he has to talk about.” David says “I expected him to be bigger because he is such a gym rat.” Janelle laughs. David goes on to tell her “I don’t mind taking Kaiser because I don’t want him to hurt you. He should have my number so that he can call me and talk to you through me or just talk to me because I don’t want him hurting you.” Janelle says “I guess that’s ok.” David says “What kind of boyfriend would I be if I didn’t do everything in my power to protect you?”

Kailyn is playing basketball with Isaac at home. Meanwhile Jo and Vee are out to dinner with their daughter. They start talking about Kailyn’s situation. Jo says “Kailyn must be having a hard time over there right now.” Vee agrees. Jo then tells her “Isaac was saying how Javi would be alone in the desert without food and water. I wondered who was telling him this? I tried to explain it to him but he didn’t understand.” Vee says “He’s young so he doesn’t understand.”

Chelsea, Cole and Aubree are out looking at wedding venues. They see a beautiful one outside and the coordinator tells her “Chelsea imagine walking among your guests and coming down the aisle.”

Janelle is talking with her friend about the issues between her and Nathan about Kaiser. Her friend asks her where things stand. She tells her “I let him see him, but I am still worried that he is going to take me to court. If he does I am prepared and he can expect the fight of his life.”

Chelsea tells her friend that she and Adam have another court date on Monday with regard to child support. Her friend asks “Does Adam know that you have a court hearing on Monday ?” Chelsea says “I don’t know and it doesn’t really matter. Once this is settled it will just be another check.” Meanwhile Adam has Aubree. He is talking to his dad and he asks Adam “Have you talked to Chelsea?” Adam scoffs and says “No, it isn’t worth it. She’ll see that I am making more money and just come after it.” I am going to request custody and tell the judge that I have custody of Paisley and that is her sister.” His dad says “What’s the worst that can happen? They can’t take her anymore away.” Adam agrees.

Javi calls Kailyn and she calls Isaac and Lincoln over to talk to him. The boys say Hi and Javi tells them that he is going off base. He makes a joke about being kidnapped which makes Kailyn nervous and she asks him not to go off base. Javi tells her that he is doing everything that he needs to in order to be acclimated.

Leah and Corey go back to court and Leah is awarded more time with the girls the way she wanted. Corey calls his dad and tells him “Court went well. Everything is split fifty fifty and Leah gets to spend more time with the kids and if she slips up then we will go back and reevaluate it.”

Chelsea tells her mom that Adam didn’t show up for the child support hearing. She tells her “The hearing was at a lawyers office and there was a referee there. He basically looked at what I was making and what Adam was making. He is going to recommend that Adam go from paying two hundred dollars a month to almost a thousand.” Chelsea’s mom asked if Adam had shown up and Chelsea says “No, but that doesn’t surprise me. I would have been more shocked if he had shown up.”

Kailyn is putting Lincoln and Isaac to bed. She reads them a short bedtime story about Javi being away. She tried to wait until Javi called and when he didn’t do so in a timely manner she went ahead and read to them herself. She asked them what they wanted to play with Javi when he came home and they said “Ball.”

Janelle and David are at home and she calls her lawyer. She tells her that she took her advice and let Nathan see Kaiser. Janelle tells her “I asked him to talk to Jessie and see what she could do,” The lawyer tells her to let her worry about everything. She tells her “I have everything taken care of. ” Janelle asks David if he has heard from Nathan. David tells her “I heard from him earlier today.” He then precedes to read the messages between he and Nathan. Janelle says “We’ll see when he files.”

Leah is picking up the girls from school. She tells them “You’ll be coming home with me after cheer.” When Leah gets to Corey’s the two of them sit down and talk. Leah says “We have a lot of miscommunication.” Corey agrees and says “I am tired of going to court. I just want to do what is best for the girls.” Leah agrees and says “We need to learn to communicate better and talk to each other when issues come up.” Corey nods and tells her “I never wanted you to not be in their lives and be their mother.” Leah and Corey agree to work together to parent the children.